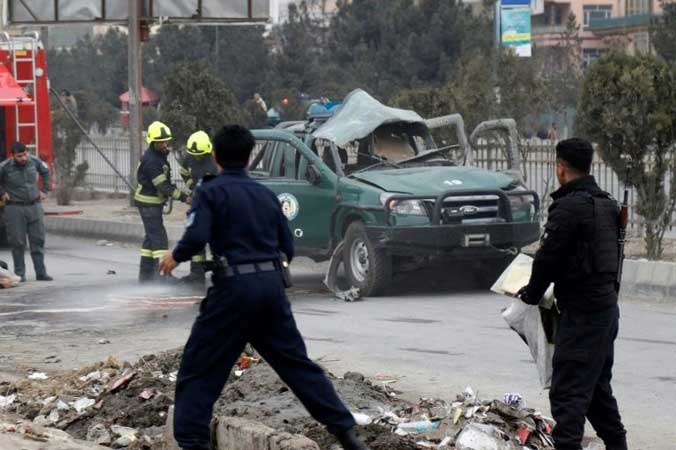 WASHINGTON: The US Pentagon Press Secretary John Kirby on Thursday said there had been an explosion outside the Kabul airport, adding it was unclear if there were casualties.  Kirby said his office would provide additional details when they are available

US and allied officials have said they had intelligence that suicide bombers were threatening to attack the airport. The explosion came as thousands were in the proximity of the airport seeking to flee Afghanistan, with Western countries ramping up evacuation efforts as the pull out deadline  August 31  approaches.

US President Joe Biden has been briefed on the explosion, according to a White House official. Biden was in a meeting with security officials about the situation in Afghanistan, where the United States is in the final steps of ending its 20-year war, when the explosion was first reported, according to a person familiar with the matter. The US has been racing to airlift its citizens and some Afghan citizens from Kabul before its military is set to fully withdraw from Afghanistan on August 31.

The United States and coalition partners have evacuated about 95,700 people since August 14, the day before the Taliban entered Kabul, the White House said on Thursday. Meanwhile, Britain’s defence ministry said it was working urgently to establish what had happened at Kabul airport following reports of the explosion.

“We are working urgently to establish what has happened in Kabul and its impact on the ongoing evacuation effort,” the defence ministry said on Twitter. “Our primary concern remains the safety of our personnel, British citizens and the citizens of Afghanistan. We are in close contact with our US and other NATO allies at an operational level on the immediate response to this incident.”

As many as US troops may have been injured in the blast, an official told Reuters, citing initial information. The Turkish Defence Ministry said two explosions occurred at the airport, but none of its troops had been injured.

Canadian forces halted their evacuations of around 3,700 Canadian and Afghan citizens on Thursday, saying they had stayed as long as they could before the deadline lapses. US and allied troops also have to plan the logistics of their own withdrawal. “We wish we could have stayed longer and rescued everyone,” the acting chief of Canada’s defence staff, General Wayne Eyre, told reporters.

Biden ordered all troops out of Afghanistan by the end of the month to comply with a withdrawal agreement with the Taliban, despite European allies saying they needed more time. In an alert on Wednesday, the US Embassy in Kabul advised citizens to avoid travelling to the airport and said those already at the gates should leave immediately, citing unspecified “security threats”.

British Armed Forces Minister James Heappey said intelligence about a possible suicide bomb attack by Daesh militants had become “much firmer”. “The threat is credible, it is imminent, it is lethal. We wouldn’t be saying this if we weren’t genuinely concerned about offering [Daesh] a target that is just unimaginable,” Heappey told BBC radio.

Australia also issued a warning for people to stay away from the airport while Belgium ended its evacuation operations because of the danger of an attack. The Netherlands said it expected to carry out its last evacuation flight on Thursday.

Fighters claiming allegiance to Daesh first began appearing in eastern Afghanistan at the end of 2014. Daesh established a reputation for extreme brutality as it fought the Taliban both for ideological reasons and for control of local smuggling and narcotics routes, according to Western intelligence services.

It also claimed a series of suicide attacks in cities like Kabul, where as well as government and civilian institutions, it particularly attacked targets associated with the Shia religious minority. The US military has said it would prioritise evacuating its troops, numbering about 5,200, in the two days before the deadline to leave.

Since the day before the Taliban swept into Kabul, the United States and its allies have mounted one of the biggest air evacuations in history, bringing out about 95,700 people, including 13,400 on Wednesday, the White House said on Thursday.

US Secretary of State Antony Blinken said at least 4,500 American citizens and their families had been evacuated from Afghanistan since mid-August. The Taliban have encouraged Afghans to stay, while saying those with permission to leave will still be allowed to do so once commercial flights resume.

The Taliban’s 1996-2001 rule was marked by public executions and the curtailment of basic freedoms. Women were barred from school or work. The group was overthrown two decades ago by US-led forces for hosting the Al Qaeda militants who masterminded the September 11, 2001 attacks on the United States. The Taliban have said they will respect human rights and will not allow terrorists to operate from the country.