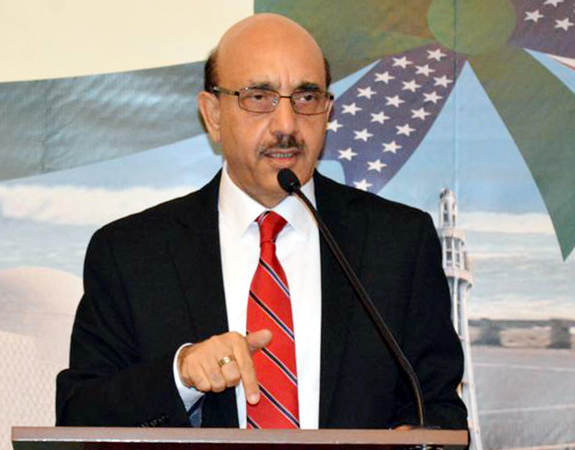 President Azad Jammu and Kashmir (AJK) Sardar Masood Khan has urged the European countries and members of the European Parliament to play their role to ward off danger posed to peace and security of the region due to the unresolved Kashmir conflict.

In a letter to 16 members of the European Parliament, he said that we fully support the call of the members of the European Parliament for negotiations among Pakistan, India, and the representatives of the Kashmiri people to resolve the Kashmir issue in accordance with the relevant UN Security resolutions. Sardar Masood asserted, “This imperative cannot be blindsided if we sincerely want to end the worst human rights catastrophe in the occupied territory and address threats to the peace and security of the region.”

While touching upon the situation prevailing in occupied Kashmir, the state president said that the heinous crimes being committed in IOJK is devastating. Under the cover of the draconian laws that empower the occupation authorities to act with impunity, killings, blinding, arbitrary detentions, torture, sexual violence, and enforced disappearances are rampant.

Right to freedom of expression, movement, health, and education- all have been curbed, he said adding that the lives of human rights defenders and journalists are at risk.

Expressing his deep gratitude to the 16 MEPs for writing a letter to the European Commission president, vice president, and other high representatives of the European Commission on July 30, Sardar Masood said that they have raised their voice over the situation in occupied Jammu and Kashmir when most of the world parliaments are silent over the worst human rights violations and the humanitarian crisis in occupied Kashmir.

“At a time when most of the parliaments are silent on the deteriorating human rights situation and deepening humanitarian crisis in the Indian Occupied Jammu and Kashmir, you have sent a powerful and comprehensive communication to the EU leadership to address the appalling situation in the region.” Sardar Masood Khan asserted that the biggest danger the people of occupied Jammu and Kashmir are facing at present is the Indian plan to settle millions of Hindu citizens in occupied Kashmir to turn the Muslim majority into a minority there.

“The most sinister existential threat to the Kashmiris are facing is the illicit transfer of millions of Hindus from India to the occupied territory designed to change its demographic composition. Land laws have been amended to expropriate the bulk of Kashmiri land,” he said.

He went on to say that these are war crimes and crimes against humanity under customary international law.