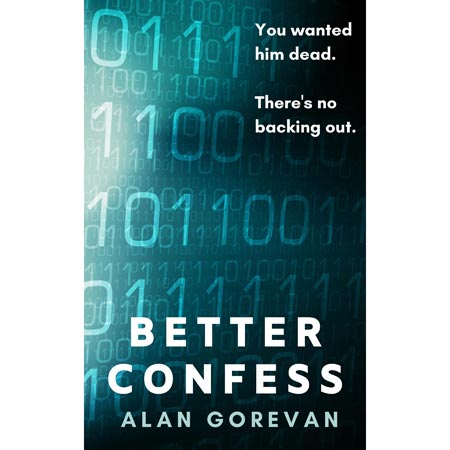 Whilst we were all stuck at home during the global pandemic many of us spent our time lazing about in loungewear, occasionally attiring our upper bodies in something more professional for the benefit of our colleagues on Zoom.

All that I have to show for my time in lockdown is a few extra pounds where my waist used to be and a very basic grasp of the Italian language. Yet someone was making excellent use of his time, as the rest of us demanded to be entertained. Dublin-based writer, Alan Gorevan, spent his confinement producing some truly brilliant thrillers. I’m steadily working my way through them all and I would like to share with you my favourite so far. Here’s the blurb from the back cover…

“Better Confess: an online forum where you can anonymously reveal your darkest thoughts and actions. But be careful what you write. When Florence Lynch finds out her boyfriend is cheating on her, she feels like her whole world has collapsed. In a drunken rage, she confesses that she wishes he was dead. And someone offers to help…”

Having joined Twitter last year to keep abreast of international news, I have come to realise how easy it is for people to hide behind a keyboard whilst showcasing their vile side. In “Better Confess” the odious Florence locates an online outlet for her fury, with far-reaching consequences. The book gives us a glimpse into what can happen if we indulge our most primitive impulses. In this case, the all-consuming need for revenge.

Alan Gorevan writes a mean thriller and is an astute observer of the human condition. “Better Confess” is a prime example. Short chapters throughout contribute to the fast-paced nature of the narrative. In fact, perfect pacing is a hallmark of his work. This is a writer who really gets inside his characters to allow us to see things from their perspective. Through characters Thomas and Archie, we have the opportunity to consider the multiple facets of man, and confront the fact that people are seldom all good or all bad – most of us residing somewhere on a spectrum in between. Gorevan is a very visual writer which has a transporting effect on the reader. As for his ability to build suspense and tension? It just about kills you. There are a couple of twists in “Better Confess” to which the only possible response is a loud expletive, expelled at high volume.

Having joined Twitter last year to keep abreast of international news, I have come to realise how easy it is for people to hide behind a keyboard whilst showcasing their vile side. In Better Confess, the odious Florence locates an online outlet for her fury, with far-reaching consequences

Gorevan’s work is deceptively easy to read, possessing a gluttonously moreish nature. However, through this lens of exploiting our worst fears, he explores more complex themes such as patriarchal class-based structures, identity and belonging. I found the commentary on indentured servitude versus the notion of an Irish slave trade interesting. It takes a certain kind of bravery to touch upon such an emotive subject, even in a fictional context. In fact, Gorevan often incorporates historical elements in his work. “Better Confess” gave me something of an introduction to the Redlegs – the poor, white underclass living in the Caribbean, many of whom were transported there from Ireland in the 17th century. Although that’s only a relatively small section of a book which sent me down several Google rabbit holes.

Overall, Gorevan’s plotting is first class. Every strand is tied together expertly, resulting in an extremely compulsive and satisfying read. “Better Confess” is a great introduction to the scope of Alan Gorevan’s writing and once you’ve experienced the world through his eyes, you will never look back.

The writer is a freelancer and can be reached at sarahfaichneywrites@gmail.com. She Tweets at @SarahFaichney