All set to celebrate 74th I-Day in a befitting manner 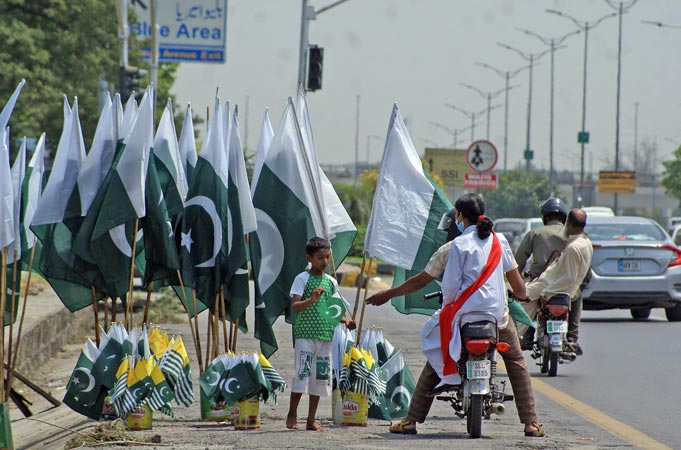 The arrangements are underway across the district like other parts of the country to mark the Independence Day in a befitting manner on August 14.

With the start of August, the measures for the celebrations of the 74th Independence Day of Pakistan have begun in every nook and corner of the city to celebrate the day with zeal and zest. As Independence Day gets nearer, the buildings were being illuminated and a number of colourful activities have also been planned to mark this occasion with great enthusiasm.

Different public and private departments will hold special functions and activities including seminars, discussion programmes, photographic exhibitions, painting, poetry, national songs and debate competitions with the focus on acknowledging the contribution of leaders of the Pakistan movement and sacrifices of national heroes.

Jashan-e-Azadi preparations were at their peak as only five days left while the most eager were children who were busy collecting stickers, badges and also beautifying their bicycles with special stickers inscribed with messages of Independence Day.

The makers of buntings, flags, banners and badges were working round the clock to meet demand as well as supplying to other adjoining areas of the city.

A number of stalls carrying bunting, flags, badges, Azadi dresses, toys and other accessories were set up in all commercial areas and streets of the city to attract youth and children. Many food outlets were ready to offer Azadi deals with the discount to attract food lovers while different boutiques and shops offer a huge variety of Azadi dresses.

“We have planned to wear Azadi dresses of green and white colour, bangles and badges and will avoid visiting any recreational place this year due to prevailing wave of COVID-19 pandemic,” said Amina, a citizen. She further said this year they will mark their Independence Day with patriotic zeal but in a limited manner due to the holy month of Muharram

The city district government has also chalked out a plan in this regard while Awami Muslim League will hold its traditional public meeting at Lal Haveli on Aug 13 which would be addressed by the Federal Minister for Interior Sheikh Rashid Ahmed under strict COVID-19 SOPs.

A number of stalls with buntings, flags, badges and other items have been established in main city markets including Tench Bhatta, Saddar Bazaar, Raja Bazaar, Urdu Bazaar, Benazir Bhutto Road, Banni Market and other areas of the city. According to the programme, the day would dawn with special prayers in mosques for the integrity, solidarity and development of Pakistan.