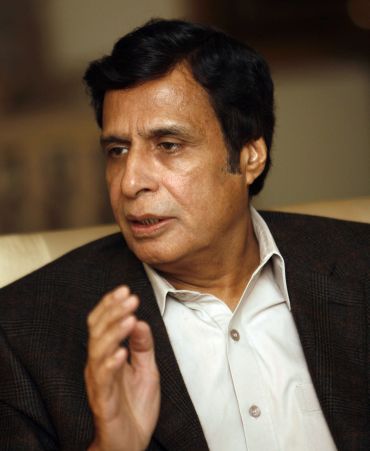 Former Chief Minister of Pakistan’s Punjab province Chaudhry Pervaiz Elahi speaks to Reuters in LahorePunjab Assembly Speaker Chaudhry Pervaiz Elahi has once again expressed his severe displeasure and anger over the bureaucracy saying that government officials do not take the parliament seriously. Speaker Elahi, a seasoned politician, once again adjourned the House without taking any agenda item due to the absence of Secretary Food and said that the concerned secretary was supposed to be present when questions related to his department are there on the agenda. Speaker Elahi, earlier, made it clear that the officers, who are responsible for not bringing MPA Nazir Chohan in the House on the production orders issued by him, will also be booked.

According to the details, the session of Punjab Assembly started with the delay of more than one and half hour from its scheduled time with Speaker Elahi in the chair. As the session started, Minister for Prisons Fayyaz ul Hassan Chohan tried to explain the issue of MPA Nazir Chohan, who was arrested by the FIA on the complaint of PM’s aide Mirza Shehzad Akbar. Fayyaz Chohan said that MPA Nazir Chohan did wrong by asking the religious faith of Shehzad Akbar. “Nazir Chohan was in Kot Lakhpat Jail when he developed some heart related issues. I immediately took keen interest and tried to become a bridge between Nazir Chohan and Shehzad Akbar after talking to high command of the party,” the minister said. Fayyaz Chohan also read a letter written by MPA Nazir Chohan from the Punjab Institute of Cardiology where he is under treatment. MPA Nazir Chohan was extremely grateful to Speaker Elahi for taking strong stand for him. Your name will be written with golden words in the history, the letter written by Chohan said. “As Mirza Shehzad Akbar has said, on twitter, that he is a Muslim and believes in the finality of Holy Prophet (PBUH). I have talked to him on phone and now our issues have been resolved,” said the letter. “Mr. Speaker, I am alright now and admitted in the Punjab Institute of Cardiology and, therefore, cannot attend the assembly session. I request you to continue the session and I will also join once my health is improved,” MPA Nazir Chohan said in the letter.

It is pertinent to mention here that Ch. Pervaiz Elahi had earlier refused to take up any agenda item in the House in the absence of Nazir Chohan. He made it clear on Monday that he will not compromise over the sanctity of the House, while he was also grateful to all the lawmakers for standing in favor of Nazir Chohan.

Later, when the question-hour was started, Speaker was informed by PML-N lawmaker Khalil Tahir Sandhu that Secretary Food is not present and the question-hour is related to his department. It annoyed Speaker once again and he asked the Parliamentary Secretary regarding the whereabouts of Secretary Food. “Do you know him? Have you ever seen him,” the speaker asked MPA Rai Zahoor Ahmad, Parliamentary Secretary for Food. The bureaucracy does not take this parliament seriously, despite the fact that I have given many rulings over this issue, the speaker said.

“The session is adjourned now to meet again on Tuesday at 2 PM,” Speaker Elahi said.