Strategy made to avert any untoward situation during Muharram: Ashrafi 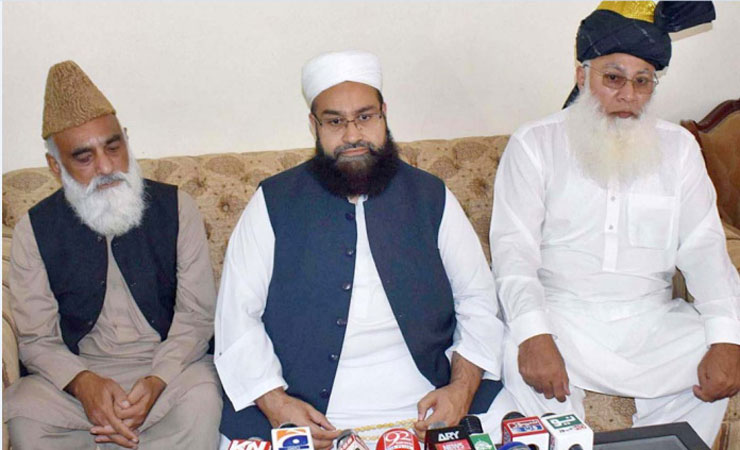 Special Representative to the Prime Minister on Interfaith Harmony and Middle East and President of Muttahida Ulema Board (MUB) Punjab Hafiz Tahir Mahmood Ashrafi said a coordination network had been established across the country to avert any untoward situation during the month of Muharram-ul-Haram.

The forum issued a 14 point joint declaration to ensure peace and harmony during the upcoming holy month.

The joint declaration prepared in line with Paigham-e-Pakistan narrative states that sectarian hatred, armed sectarian conflict and the use of force to impose one’s views and ideology on others is against the rules of Islamic Shariah and spreading anarchy and chaos in the state is a national crime.

It is a responsibility to keep and ensure the sanctity of the Holy Prophets, the Companions of the Holy Prophet, and the spouses of the holy prophet and the Ahl al-Bayt (as) and all religious schools of thought refrain from those who utter sacrilegious comments and fan sectarian differences.

Swearing against each other (Galum Galuch), slander, provocation, hatred and killing one another on the accounts of hatred or dissension or imposing one’s ideology and views on others through coercion or persecution each other’s lives is against the Islamic Shariah. All these practices are Haraam and the Ulema and Mashaykhs of the country declare their dissociation against such elements.

The use of religious symbols and raising slogans for private objectives and purposes and for the acquisition of armed power (Influence) is absolutely not correct according to the Qur’an and Sunnah.

The declaration said it is the responsibility of the Ulema, Mashaykh and Muftis to make people aware of the differences between right and wrong ideologies, while declaring someone as infidel (Takfir) is the jurisdiction of the state which will be decided by the state according to Islamic Shariah.

All non-Muslim citizens of Pakistan have the full rights to worship and practice their religion in their worship places. While on the eve of their festivals according to their respective religions, they own the right by the Constitution of Pakistan to celebrate their festivities.

Any individual, group or organization cannot deprive them from rights as defined by Constitution of Pakistan.

It is not permissible to kill those who live in peace in a Muslim Islamic state, but it is a sin and cruelty for those who trespass and violate the Constitution of Pakistan and the laws of Pakistan, it is the responsibility of the state to punish them within the law.

According to Islam, respect for women and respect for their rights is necessary for all. Giving women the right to inheritance and the education of women is commanded by Islamic law.

The Islamic Republic of Pakistan is the sacred trust of God Almighty, so it is not permissible to use it for any kind of terrorism and extremism and we all declare dissociation against such elements.

Participation in or in any way supporting the armed uprising against the state of Pakistan, in any case, it is not permissible to do so.

Only the Islamic State has the authority to start that aspect of jihad which includes war and fighting.

The use of force in the name of enforcing Sharia, armed confrontation against the state, anarchy, riots and all forms of terrorism are forbidden under Islamic Sharia.