All about ‘Death Zone’ of K2 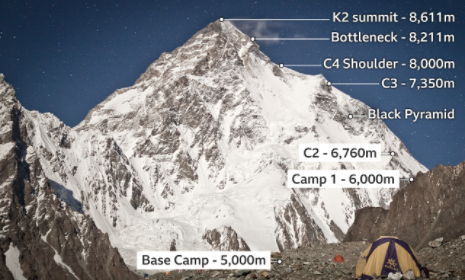 Ambitions and goals vary from person to person. For mountaineers, it is to climb mountains and taste the adventure associated with them. Despite the fact, many people give up their lives to climb up the killer mountains of the world, mountaineering is one of the most adventurous professions in the world. Concerning Pakistan, where 5 out of 13 of the world’s highest peaks are located including K2, Nanga Parbat, Gasherbrum No 1,2, Broad Peak shows its potential in adventure tourism.

The recent death of Ali Sadpara has raised the attention towards the mountaineering profession in Pakistan. His passion for climbing up the highest mountain peaks enabled him to expedite K2. Unfortunately, he died while expediting K2 in February. His dead body has been located from the Bottleneck of K2 which is also known as the death zone.

The death zone of K2 has some hidden secrets. It was not only Ali Sadpara who gave up his life on this particular point on Godwin Austen, the “Death Zone” is a region near the top of the world’s tallest mountains that earns the name because humans aren’t meant to survive there. Due to this fact, many mountaineers lost their lives on this point.

Back in October 2017, a video was published on the website of INSIGHT on the experience of Vanessa O Brien an American mountaineer, an explorer who shared her insight on the death zone of K2. According to her, the death zone was a part located at the extreme height of the mountain. Mountaineers have naturally this feeling that they have reached the height of 8000 meters directly hitting the troposphere and stratosphere, the point where planes fly.

Various Internet sources have discussed the tips for successful expedition techniques. Those mountaineers who do not have experience climbing up a few of the world’s highest mountains are advised not to approach the objective with overconfidence in their abilities. As we never know about the mood of nature. Even history shows that the strongest climbers have experienced the mountain chewing them easily, therefore, much of the success of the expedition depends on the team.

Our country Pakistan has the potential of attracting adventure tourists but unfortunately, the lack of infrastructural development in hiking areas impedes the growth of adventure tourism in Pakistan. It has resulted in the number of deaths of mountaineers including Ali Sadpara. The need of an hour is to invest in enhancing the infrastructure for adventure tourism so that Pakistan can become able to earn through it.