England’s Bess glad of all overs ahead of India series 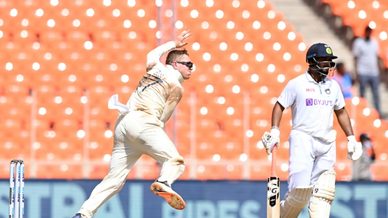 England off-spinner Dom Bess hopes to benefit from plenty of early-season overs should he face India in an upcoming Test series after mixed results against Virat Kohli’s men earlier this year.

Bess has been included in a 17-man squad for the first two encounters of a five-match campaign which starts at Trent Bridge in Nottingham on August 4. Bess played twice during England’s 3-1 series loss in India, a five-wicket haul followed by poor return in his other innings with the 24-year-old omitted from the second and third Tests. Many felt he had been poorly handled by England captain Joe Root after taking 17 wickets at 22 in the first three Tests of the tour – two games against Sri Lanka and the series opener with India in Chennai — before he was replaced by fellow off-spinner Moeen Ali.

England then asked Moeen, not included in the squad for the first two Tests of the home series, to delay a rest break authorised by team management, only for the all-rounder to decide to leave the squad as planned. But Bess believes he will be well prepared for an England recall after his overs with English county Yorkshire. “This is probably the first time where I have played a load of cricket and found a process,” Bess said after he attended a community cricket session in Nottingham.

“I have contributed with bat, ball and in the field with Yorkshire but not put pressure on myself, I just wanted to enjoy my cricket again. “And I guess I have found the balance now where I have been picked for the England squad again.” Bess’ return of 23 wickets at an average of 33.08 from 10 County Championship fixtures so far this term may not be that sensational but early-season conditions in England are generally not in favour of spinners. “It is an exciting time but there is no pressure from me to put myself under,” he said. “I just want to enjoy this series because I know how much I have worked this summer and what I have done.” The India series constitutes England’s last Test campaign before they are scheduled to begin their bid to recapture the Ashes in Australia.

Former England captain Michael Vaughan recently warned players might pull out if they were unable to bring their families with them should the strict Covid-19 regulations in several Australian states remained in force. But Bess said: “Obviously I don’t know what will be happening or what Australia and their regulations are — but I think if your name was on the ticket and you were going to an Ashes series as a 24-year-old, you would never ever turn that down. “I don’t want to go too far ahead though. We have five Tests against India and we know how good they are home and away. It wouldn’t be the best thing to think about the Ashes now when there is this big series coming up.” Bess was speaking following a session organised as part of series sponsors LV= Insurance ‘In With Heart’ tour showcasing #Funds4Runs, a £1 million joint initiative with the England and Wales Cricket Board to help grassroots cricket recover from the coronavirus pandemic.