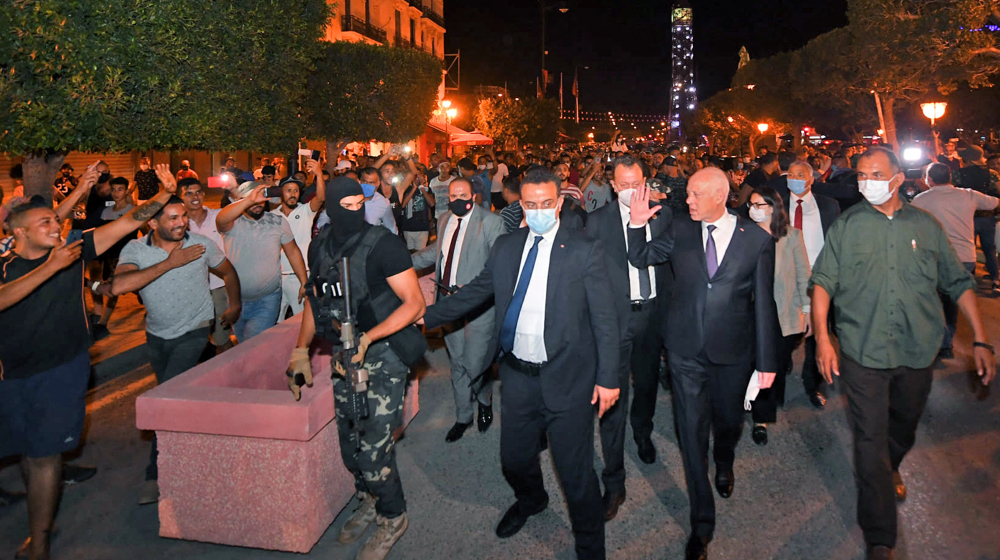 Key civil society groups warned against any “illegitimate” extension of Saied’s 30-day suspension of parliament, and demanded in a joint statement a timeline for political action. After suspending parliament and sacking Hichem Mechichi as prime minister on Sunday, dismissing the defence and justice ministers on Monday, Saied then issued orders dismissing a series of top officials. Late Tuesday, 63-year-old Saied, a former law lecturer who was a political newcomer when he won a landslide 2019 election victory, issued decrees sacking a long list of senior government officials, including the army’s chief prosecutor. He has also lifted the parliamentary immunity of lawmakers, and assumed judicial powers. Saied say his actions are justified under the constitution, which allows the head of state to take unspecified exceptional measures in the event of an “imminent threat”.

The moderate Islamist Ennahdha party, which was the largest faction in the coalition government, has labelled the power grab a “coup d’etat”, while the US, EU and other powers have voiced strong concern. On top of the political turmoil, the North African nation is struggling with a crippingly economic crisis including soaring inflation and high unemployment, as well as surging Covid-19 infections. Tunisians are waiting anxiously for clarity on the next political steps.

Saied, an austere legal academic who has said he is determined to revolutionise the political system through the law, said he would assume executive power “with the help” of a government whose new chief he would appoint himself. Names of possible candidates circulated Wednesday after Saied met with representatives of national organisations late Monday. “President Saied will be very careful in choosing the future head of government, because he wants a trustworthy and loyal person who would adopt the same policies as him,” said political scientist Slaheddine Jourchi.

The young democracy had often been cited as the sole success story of the Arab Spring, the tumult sparked across the region after Mohamed Bouazizi, a Tunisian university graduate who could only find work as a fruit vendor, set himself on fire in December 2010. But, a decade on, many in the nation of 12 million people say they have seen little improvement in living standards, and have grown infuriated by protracted political deadlock with infighting among the elite. The ousted government had also been criticised for its handling of the Covid pandemic. Tunisia has one of the world’s highest official per-capita death tolls.

“President Saied is faced with a great challenge: to show Tunisians and the world that he made the right decisions,” added Jourchi. After violent clashes outside the army-blockaded parliament on Monday, the Ennahdha party said “organised thugs” were being used to “provoke bloodshed and chaos”. It urged its supporters “to go home in the interests of maintaining the peace and security of our nation”. On Tuesday Ennahdha said that, “for the sake of the democratic path,” it is “ready to go to early legislative and presidential elections” while demanding “that any delay is not used as a pretext to maintain an autocratic regime.”

Noureddine B’Hiri, a senior Ennahdha leader, said the party had “decided to campaign peacefully to defeat” the president’s plans. But before any elections, “parliament should resume its activities and the military end its control,” B’Hiri told AFP. In the 10 years since Tunisia’s popular revolution toppled dictator Zine El Abidine Ben Ali, Tunisia has had nine governments. Some have lasted just months, hindering the reforms needed to revamp the country’s struggling economy and poor public services.