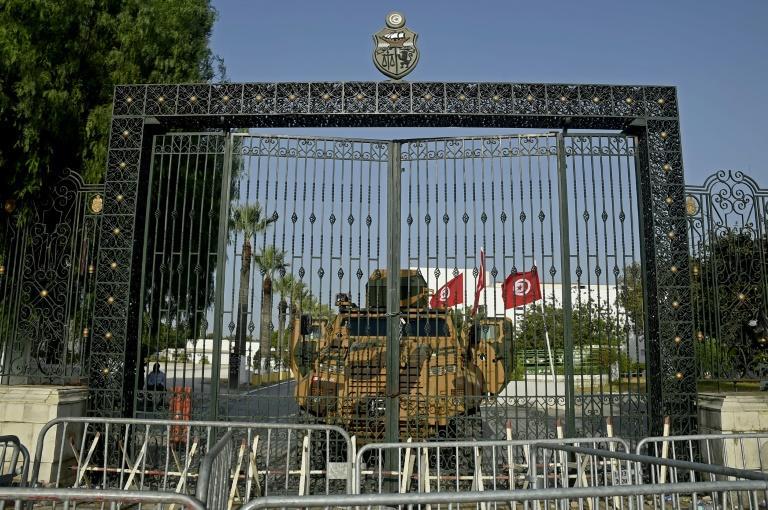 Opponents of Tunisia’s President Kais Saied, who sparked a crisis by suspending parliament and sacking the premier, said Tuesday they were ready for early elections while warning against an “autocratic regime”.

The moderate Islamist Ennahdha party, which was the strongest group in the coalition government, has labelled Sunday’s power grab a “coup d’etat” while the US, EU and other powers have also voiced strong concern. Ennahdha on Tuesday said that, “for the sake of the democratic path,” it is “ready to go to early legislative and presidential elections” while warning “that any delay is not used as a pretext to maintain an autocratic regime.” The party also accused Saied of having “worked with undemocratic forces to overturn the constitutional rights of elected officials, and replace them with members of his own chosen cabal”.

Noureddine B’Hiri, a senior Ennahdha leader, said the party had “decided to campaign peacefully to defeat” the president’s plans, saying “national solidarity” was needed. But before any elections, “parliament should resume its activities and the military end its control,” B’Hiri told AFP. The Moroccan and Algerian foreign ministers, Nasser Bourita and Ramtane Lamamra, met Saied in Tunis on Tuesday, according to the Tunisian foreign ministry, which made no reference to the political crisis.

After violent clashes Monday, Ennahdha said “organised thugs” were being used to “provoke bloodshed and chaos”, and urged its supporters “to go home in the interests of maintaining the peace and security of our nation”. The young North African democracy of 12 million people, the cradle of the Arab Spring uprisings a decade ago, was thrust into a constitutional crisis on Sunday. Saied appeared on national television to declare he had dismissed the premier, Hichem Mechichi, and ordered parliament closed for 30 days, later sending army troops to the legislature and the prime minister’s office. The president’s actions, ostensibly “to save Tunisia”, followed a day of street protests against the government’s poor handling of the Covid pandemic, which has claimed one of the world’s highest official per-capita death tolls in Tunisia.

The president also said he would pick a new prime minister, lifted the parliamentary immunity of lawmakers, and warned armed opposition would be met with a “rain of bullets”. He later fired the defence and justice ministers. Street clashes between his backers and opponents broke out Monday outside the barricaded parliament, leaving several people wounded. Police also shuttered the TV station of Qatar-based broadcaster Al Jazeera. The office of the Tunisian parliament, chaired by Ennahdha leader Rached Ghannouchi, late Monday voiced its “absolute rejection and strong condemnation” of the president’s actions.

Many Tunisians have expressed support for the president, and thousands flooded the streets to celebrate on Sunday night, while others voiced fear of a return to dictatorship. The French language newspaper Le Quotidien on Tuesday wrote that Saied’s “kick… in the parliamentary ant hill has taken many people by surprise, starting with Ennahdha”. The young democracy had often been cited as the sole success story of the Arab Spring, the tumult sparked across the region after Mohamed Bouazizi, a university graduate who could only find work as a fruit vendor, self-immolated in December 2010. Tunisia is seen as a key to regional stability, located between Algeria which faces political turmoil and war-battered Libya, from where every year thousands of desperate migrants seek to cross the Mediterranean to Europe, with many dying along the way. US Secretary of State Antony Blinken on Monday spoke by telephone with Saied and urged him “to adhere to the principles of democracy and human rights that are the basis of governance in Tunisia”.

The top US diplomat urged Saied to “maintain open dialogue with all political actors and the Tunisian people,” the State Department said. The European Union’s foreign policy chief Josep Borrell on Tuesday urged “the resumption of parliamentary activity, respect for fundamental rights and an abstention from all forms of violence”. Moussa Faki Mahamat, chairman of the African Union Commission on Tuesday called for “the strict respect of the Tunisian constitution… and the promotion of political dialogue”.