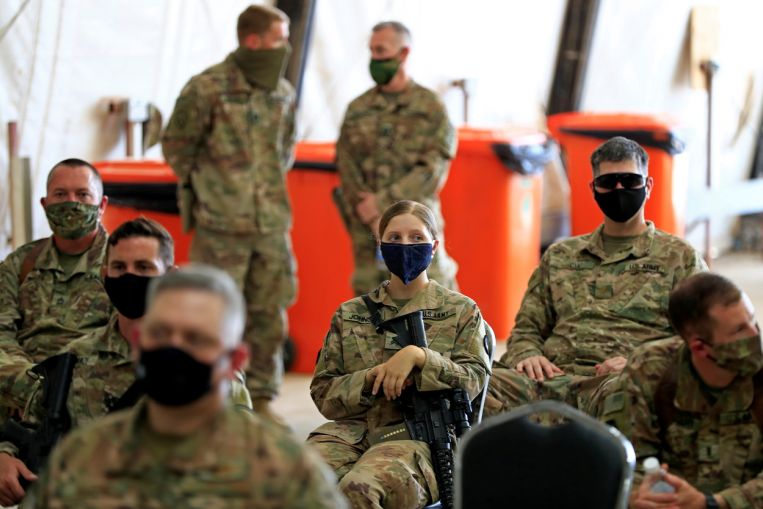 Several powerful pro-Iran groups in Iraq Tuesday welcomed an announcement by Washington that US combat operations in the country will end this year, an outcome they have long demanded.

US President Joe Biden declared on Monday that “we’re not going to be, at the end of the year, in a combat mission,” as he hosted Iraqi Prime Minister Mustafa al-Kadhemi for White House talks. US troops would continue to provide training and assistance to the Iraqi military, including also intelligence co-operation, falling short of pro-Iran factions’ demands for a full withdrawal. But the Conquest Alliance, the political wing of Iraq’s Hashed-al-Shaabi paramilitary network, which is dominated by pro-Iran groups, said it considered Biden’s announcement “to be a positive step towards the full sovereignty of Iraq.” “We hope that it will materialise on the ground,” it added. US troops were invited into Iraq in 2014 — three years after ending an eight-year occupation that began with the invasion to topple Saddam Hussein — by a government desperate to halt a sweeping advance by the Islamic State group.

Iraq’s government declared IS defeated in late 2017, but the Sunni extremists retain sleeper cells and still launch periodic suicide attacks. The US and Iran are both major allies of Iraq and share an enmity towards IS, but Tehran also considers Washington its arch foe and has long pressed for a withdrawal of US troops from its neighbour. Pro-Iran armed factions stand accused of carrying out around 50 rocket and drone attacks this year against US interests in Iraq. Since last year, the principal role of the remaining US troops — now totalling 2,500, after drawdowns under Biden’s predecessor Donald Trump — had already been to train, advise and support the Iraqi military in its fight against IS.

Biden’s announcement therefore indicated little major change of policy. The face-to-face meeting was to give political  cover to Kadhemi, in power for little over a year and under intensifying pressure over the continued US presence, analysts said. Several other pro-Iran groups in Iraq also reacted positively. The Imam Ali Brigades lauded “the end of the foreign presence” and said it “thanked the (Iraqi) government for keeping its promises,” while influential Shiite cleric Moqtada al-Sadr also welcomed Biden’s announcement. But more radical pro-Iran groups have not yet responded.