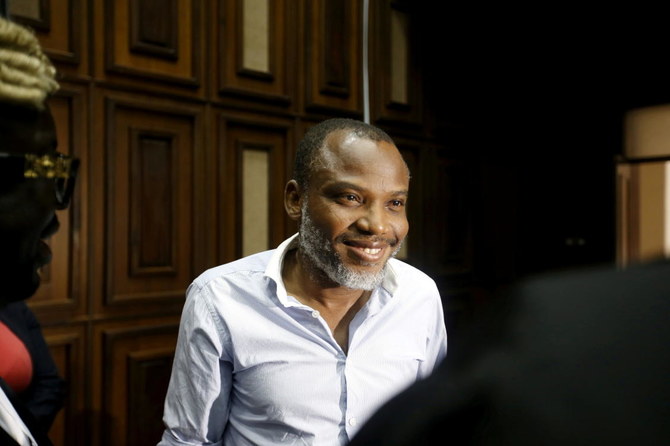 Nigeria on Monday resumed the trial of a prominent separatist leader who was brought back to the country in controversial circumstances, but the case was quickly adjourned after he was not present in court.

Heavy security was deployed outside the federal high court in the capital Abuja for the case of Nnamdi Kanu of the Indigenous People of Biafra (IPOB), an outlawed movement which agitates for a separate Biafran state in southeast Nigeria. The government said last month that Kanu was “brought back” to Nigeria in order to face justice, but gave no details. His family and lawyers say he was taken in Kenya. The case was swiftly adjourned as Kanu “wasn’t brought to court,” one of his lawyers, Aloy Ejimakor, told AFP. Judge Binta Murtala-Nyako ruled the trial could not start without the defendant being present and the prosecution did not give a valid reason for his absence, Ejimakor said. “The matter was adjourned to October 21,” Ejimakor said.

Kanu, 53, was arrested in late 2015 after calling for a separate homeland for the Igbo people in southeast Nigeria. In 2017, he jumped bail, reappearing in Israel and Britain. On June 29, Nigeria’s justice minister and attorney general, Abubakar Malami, announced Kanu had been “brought back to Nigeria in order to continue facing trial after disappearing.” His charges include “terrorism, treasonable felony, managing an unlawful society, publication of defamatory matter, illegal posession of firearms and improper importation of goods, among others,” Malami said.

Many journalists were barred from entering the courtroom on Monday, a move that was condemned as restrictive by rights groups. “We call on the Nigerian authorities to respect the right to a fair hearing and immediately lift the restriction and allow the media unhindered access to the court to do their job,” Amnesty International said in a statement. Supporters of Kanu were outside the courtroom, including human rights activist Omoyele Sowore who was temporarily detained by police, an AFP journalist at the scene reported. Kanu’s lawyer Ejimakor said in a statement on Monday he had filed a case with the African Union commission over his client’s alleged extradition from Kenya. “A few days ago, I commenced a continental legal action against Nigeria and Kenya before the African Commission on Human and Peoples Rights, demanding accountability for the extraordinary rendition of Mazi Nnamdi Kanu,” he said.

“Jurisdiction lies with the Commission because Nigeria and Kenya are State Parties to the African Charter,” he said. Ejimakor said Nigeria even took a step further to domesticate the Charter, thus making it part of her municipal laws. “Both countries also have extradition laws that prohibit this sort of reprehensible conduct that saw Kanu to Nigeria,” he said. Calls for a separate state of Biafra are a sensitive subject in Nigeria, after a unilateral declaration of independence in 1967 sparked a brutal 30-month civil war. More than one million people died, most of them Igbos, from the impact of conflict, hunger and disease.

Separatist agitation is just one of the challenges facing president Muhammadu Buhari’s government ahead of the 2023 election. Another activist, Sunday Igboho, who advocates for independence for the southwestern Yoruba people, was arrested last week at the airport in neighbouring Benin, police and airport sources told AFP. Igboho was expected to be arraigned on Monday in Benin’s commercial capital Cotonou. At least 50 people who support Igboho and the Yoruba separatist cause were outside the courtroom, an AFP journalist at the scene reported.

Igboho was on the run after a gun battle that killed two of his men and weapons and ammunition were discovered at his home, Nigeria’s Department of State Services intelligence agency said. Igboho “will be extradited to Nigeria as soon as the two countries have agreed on conditions,” a senior Benin police official said, with a second confirming the arrest. A source at Cotonou airport said he had been arrested before boarding a Germany-bound flight. Nigerian authorities did not immediately respond when contacted by AFP.