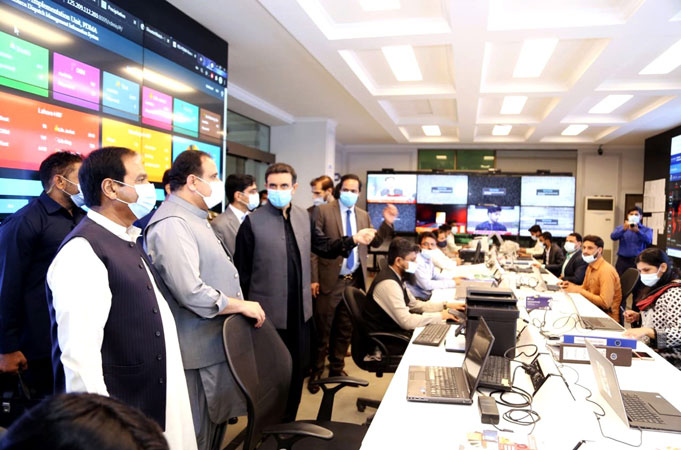 In a statement, the CM reiterated that the PTI’s success is a victory of honesty and trustworthiness. After Gilgit Baltistan, he said, the people in AJK have also rejected the negative politics of looters and thieves. The anti-state narrative of the opposition has been crushed, he said, adding that the Kashmiris have put the final nail in the coffin of the corrupt.

“The elections’ results have proved that people have full trust in the PTI leadership. The Kashmiris have chosen a sincere, transparent and service-oriented leadership and picked PTI because of its performance and a successful agenda of change in the new Pakistan,” he said.

The CM went on to advise the opposition parties to follow democratic norms, instead of raising doubts. “The practice of raising useless objections in case of a defeat would not work now, as democratic values have been practised in AJK elections,” he added.

Meanwhile, Buzdar visited the Provincial Disaster Management Authority (PDMA)’s head office to inspect the control room for monitoring the monsoon season and possible flood situation. He was briefed about the situation of rivers, the weather forecasting system, arrangements for dealing with the flood-related situation and relief activities.

The CM directed the PDMA to remain fully vigilant and to monitor the inflow and outflow of water in rivers, as well as weather conditions. Line departments should remain alert with their emergency plans and best coordination between federal and provincial departments be ensured, he emphasised.

The CM directed the PDMA to ensure the availability of necessary material in warehouses, adding that dewatering sets should be fully functional. PDMA minister Mian Khalid Mahmood, secretary irrigation and others were also present.

Earlier, the Pakistan Electronic Media Regulatory Authority (PEMRA) Chairman Muhammad Saleem Baig called on Buzdar at the civil secretariat to discuss the launch of a TV channel by the Punjab government. He also presented the annual PEMRA report to the CM.

The CM lauded the performance of PEMRA, adding that media plays a pivotal role in shaping public opinion.

Separately, Buzdar chaired a meeting at the civil secretariat to review steps for dealing with the fourth wave of coronavirus. He was also briefed on the special vaccination drive in five cities.

The chief minister directed authorities to further expedite the vaccination drive, adding that the health department and the concerned administration should actively perform to make this campaign a success. He appealed to the citizens to vaccinate themselves to secure their lives.

“The Punjab government has made effective measures to overcome the virus as the ratio of positive cases is less than three per cent,” he said.

The citizens should follow SOPs to remain safe from the fourth wave as 11 persons have died due to corona during the 24 hours, he further said. Health Minister Dr Yasmeen Rashid, chief secretary and others attended the meeting.