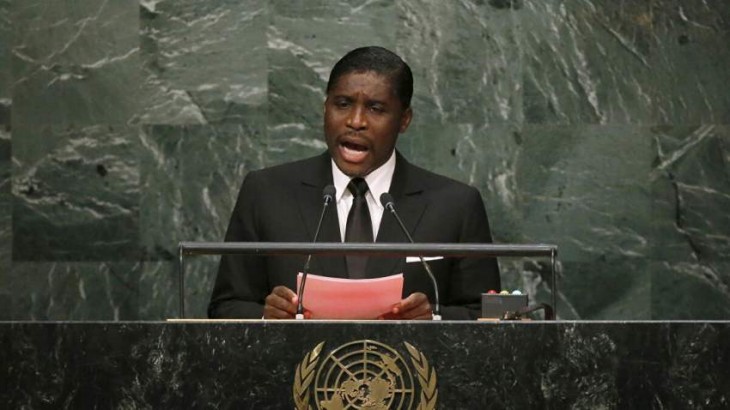 The central African state of Equatorial Guinea announced Monday it was closing its embassy in London after Britain imposed sanctions against the son of its veteran president over corruption allegations.

“The first decision that the government has taken is the total closure of our diplomatic mission in London,” Foreign Minister Simeon Oyono Esono told state broadcaster TVGE. He gave no details as to when the decision would take effect. “We do not accept interference in our country’s domestic affairs,” he said, describing the sanctions as “breaching the principle of international law”.

On Thursday, Britain slapped sanctions on Teodorin Nguema Obiang, Equatorial Guinea’s vice president and son of President Teodoro Obiang Nguema, for allegedly syphoning state assets into his own bank accounts. The British Foreign Office said the younger Obiang had made corrupt contracting arrangements and solicited bribes to support his jet-setting lifestyle. It alleged he had splurged $500 million (425 million euros) on mansions around the world, luxury cars and a collection of Michael Jackson memorabilia including a $275,000 crystal-covered glove that the singer wore on his 1987-89 “Bad” tour.

The only Spanish-speaking country in sub-Saharan Africa, Equatorial Guinea is one of the most enclosed nations on the continent, and many of its people live in deep poverty despite oil wealth. Its ruler Obiang, 79, is the world’s longest-serving sitting president and is frequently accused by rights groups of abuses. In 1979, he ousted his uncle Francisco Macias Nguema, who had ruled the country since independence from Spain in 1968, and had him shot by firing squad.

His son Teodorin, 53, is vice president with responsibility for defence and security and has long been considered as his likely successor. Teodorin Obiang is one of five foreigners who were targeted last Thursday in the second wave of a British crackdown on corruption. The sanctions entail the freezing of assets and a bar on entry to the United Kingdom. Tutu Alicante, head of EG Justice, a group that campaigns for human rights in Equatorian Guinea, said, “it’s a step in the right direction, which shows that corruption is not victimless crime.” Most of the country’s 1.4 million citizens have no access to running water or decent education, said Alicante, who lives in exile.

The economy has been badly hit since a slump in oil prices in 2014 crimped government revenue. In its 2020 budget, Equatorial Guinea spent 95 billion CFA francs ($170 million / 140 million euros) on defence, compared to 59 billion francs on education. Equatorial Guinea on Saturday lashed the sanctions as “unilateral and illegal”. “The baseless sanctions imposed by the British government find their justification in manipulation, in lies… that certain non-governmental organisations are fomenting against the good image of Equatorial Guinea,” it said.

The younger Obiang “has not made any investment in the United Kingdom”, the government added. The junior Obiang is already entangled in a dispute with France over a 107-million-euro mansion on Paris’s swanky Avenue Foch that was seized along with a fleet of luxury cars in a probe into so-called “ill-gotten gains.” In February 2020, a French court handed him a three-year suspended sentence, a 30-million-euro fine and confiscation of his assets in France. A final ruling by the Court of Cassation, the paramount tribunal in France’s judicial system, is expected on Wednesday.