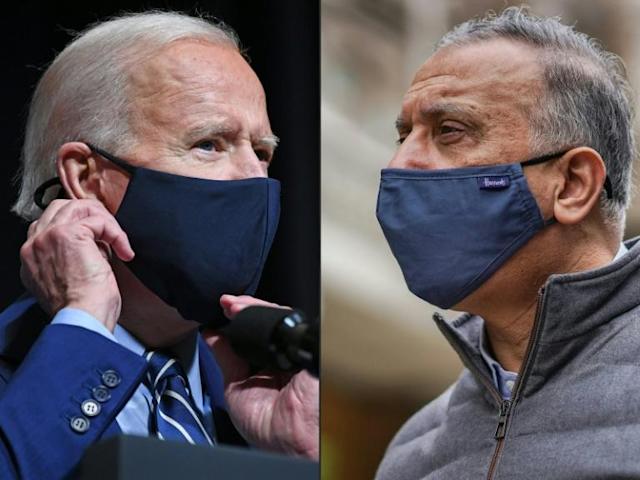 US President Joe Biden welcomes Iraqi Prime Minister Mustafa al-Kadhemi on Monday in his first meeting with the weakened leader, whose loyalties are precariously split between the US ally and pro-Iran factions at home.

At the heart of the meeting will be the presence of US troops in Iraq and more broadly, whether Baghdad has what it takes to stand up to residual Islamic State jihadist group cells within the country’s borders. Just last week, the IS group claimed a deadly suicide bombing at a Baghdad market that killed 30 people, according to the official toll. All the while, US forces in Iraq have been subject to repeat attacks by pro-Iran militias, who in turn have suffered military reprisals launched by Washington. Some 2,500 US troops still remain in Iraq as part of an anti-IS coalition — a number on top of which there are likely additional special forces, whose numbers are not publicly known.

Kadhemi, whose country has been ravaged by a trifecta of violence, poverty and corruption, would like the United States to commit, at least formally, to a reassessment of its presence in his country. With three months to go before legislative elections, the head of the Iraqi government is hoping to regain a bit of ground with his country’s powerful pro-Iran factions, which are overtly hostile to the US presence. Technically, there are no actual combat troops on the ground in Iraq, where the US military has officially only deployed advisors or trainers.

Iraq is an important strategic link for the United States, which leads the international coalition fighting the IS group next-door in Syria. Abandoning Iraq to Iranian influence is out of the question for the United States, with Washington and Tehran mired in renewed tensions — even if Biden has signaled his readiness to return to the 2015 Iran nuclear deal. In the context of this tug-of-war “it doesn’t seem likely that the number of US troops in Iraq will be reduced dramatically,” said Hamdi Malik of the Washington Institute think tank. Ramzy Mardini, an Iraq specialist at the University of Chicago’s Pearson Institute, believes the Biden-Kadhemi meeting may cosmetically be “shaped” to help the Iraqi premier alleviate domestic pressures, “but the reality on the ground will reflect the status quo and an enduring US presence.”

What regional specialists fear most, however, is a continuation or even intensification of the attacks perpetrated by the pro-Iran factions. Again on Friday, a drone attack was carried out on a military base in Iraqi Kurdistan that hosts American troops, but did not cause any casualties. The Iraqi Resistance Coordination Committee, a group of militia factions, on Friday threatened to continue the attacks unless the United States withdraws all its forces and ends the “occupation.”