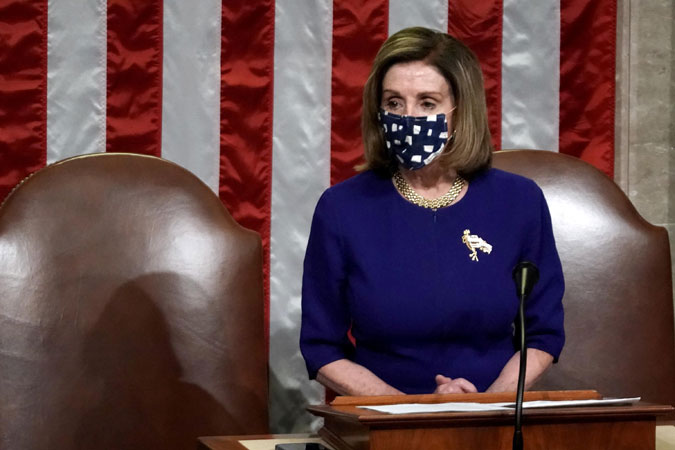 House Speaker Nancy Pelosi on Sunday said she plans to appoint additional Republicans, including a staunch Trump critic, to the committee probing the January 6 US Capitol insurrection, amid a fierce partisan showdown over who will serve on the body.

Asked whether she would appoint a new set of Republicans including lawmaker Adam Kinzinger, who voted to impeach former president Donald Trump, Pelosi told ABC “that would be my plan.”

Earlier this week House Minority Leader Kevin McCarthy withdrew the names of the five Republicans he had appointed to serve on the select committee, after Pelosi took the rare step of rejecting two of them, congressmen Jim Jordan and Jim Banks, out of what she said was concern for the investigation’s integrity.

Hours after the Capitol insurrection, both were among several Republicans who voted against certifying election results in some states.

“The two that I would not appoint are people who would jeopardize the integrity of the investigation and there’s no way I would tolerate their antics as we seek the truth,” Pelosi said Sunday.

The tit-for-tat moves represent the latest bickering over what many were hoping would be a united effort: investigating the riot in the citadel of American democracy.

Pelosi’s Democrats had sought to create a bipartisan, independent 9/11-style commission to investigate the Capitol insurrection.

Pelosi said that Republicans including Kinzinger, a strong Trump critic and six-term congressman from Illinois, “have expressed an interest to serve on the select committee.”

Pelosi herself had already appointed to the committee Republican congresswoman Liz Cheney, who was also among the 10 Republicans who voted to impeach Trump in January.

The first hearing of the commission, which has the power to subpoena witnesses and documents, is scheduled for Tuesday.