Book Review: Wanted Women: Faith, lies and the war on terror, the lives of Ayaan Hirsi Ali and Aafia Siddiqui 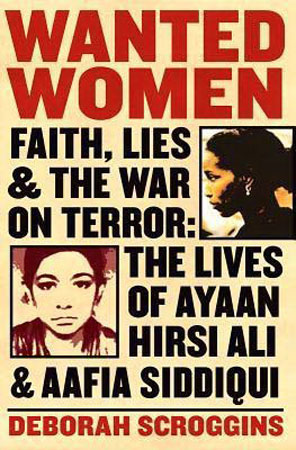 Reading this enthralling book by Deborah Scroggins was as if looking at myself through the lives of these two women. In some eerie fashion, my life resonates with those of these two women. Deborah has juxtaposed both women in such a neutral manner – tracing from what can be called the origin of each woman’s early development, personality growth and how they became the women that they are today. She has also tried to explain the global and local circumstances due to which each woman chose the path that they did. Deborah has given Aafia certain benefits of doubt even though the court proceedings clearly stated that she had a fundamentalist agenda and throughout her life tried to pursue that whether at home, MIT or elsewhere. Similarly, Ayaan did nothing much more than to hurt the image of Islam by projecting it as a simplistic religion and bowing down to cultural stereotypes and caving in to ritualization rather than following the Sufi debate which is be said to be very popular among Muslims.

Sadly Ayaan also used hatred towards her form of Islam as a media manipulation gimmick that gave her prosperity and power both over the Dutch nation and the anti- Muslim segments of society who were growing in number thanks do the doings of the likes of Aafia. It is very sad to note that Ayaan chose to defame her own birth religion without understanding it properly and made a documentary which cost Theo Van Gogh his life. She carried on with her anti- Islam tactics but once she was not welcome in The Netherlands anymore she sought refuge in D.C. Thankfully her policies didn’t see the light of day there. She claimed liberty and equality but put herself in such a position that body guards were required for her at all times no matter where she travelled and even moderate Muslims could not stand her. I find her quite an amusing character – I feel as if Ayaan looks at life like a big drama with her as the heroine savior of all the subjugated Muslim women. This however, is thankfully not the case for all Muslim women. And this is what Ayaan fails to understand.

Both women cheated the system, Ayaan in how she gained access to the Netherlands and Aafia in how she funneled funds to the Taliban. Both were beautiful women, and they knew it, which I feel, in the shallowness that is the world at large, took them a long way. Both women vociferously stood up for what they saw was right or wrong. Ayaan wanted female genital mutilation to end and she campaigned for it endlessly to the extent that she was willing to erode the privacy of the person in question by subjecting them to a test to ensure it hadn’t occurred. And they couldn’t segregate people on the basis of race just like that, something that Ayaan failed to understand.

Compared to Ayaan, when she was younger Aafia’s life was a bed of roses. She came from an upper middle class Pakistani family, was the brightest nail in the box and yet was socialized into what one can say is a very fundamentalist Wahhabi view of Islam. Forget about me, I’m Shiaa so for the Taliban I’m probably not even a Muslim.

I must say I thoroughly enjoyed the chapters where Ayaan was dragged through the mud for all the mess that she had created and how she had damaged a religion and the rights it grants. Not only that Aafia’s treatment of her husband was horrendous and I feel thoroughly sorry for the man.

Anyway, back to Ayaan who seems to be very materialistic. I mean we all want money and a lot of women want to marry rich but she used and manipulated the system to the maximum. She may have believed that Islam was fundamentalist and there is ample proof sometimes to support that view in Shariah laws, not in the text of the Quran itself, I believe, that she has taken it to an extreme as every Muslim is not a terrorist The manner in which Ayaan treats her father is appalling, she can’t face him and comes to meet him only when he is dying. Leaving matters like this to the end make me lose respect for Ayaan who otherwise can have thought to put certain intolerable practices on the map – such as female genital mutilation.

Deborah has researched every angle, left no stone unturned, and proven once again that she is the guru of solid researched books. We wish there could be a book launch in Pakistan, that’s what I’d love to have.

So with education at her fingertips Aafia chose the fundamentalist camp and learning the same Western values Ayaan chose to lose all her faith. These in my view are both extremes and one can be a Muslim and not be an Aafia Siddiqui or one can be an agnostic or an atheistic and not be an Ayaan Hirsi Ali. There are so many among us all the time. Women I admire, women I cherish, women I look up to. You don’t have to create drama in the name of a religion if you are a follower or non-follower of it. I said before that I felt close to both women because I too have studied in the Netherlands and maintained normalcy and have wanted to study in the States without being a terrorist. And there are too many like me. And this is the one lesson that I have taken from this book. To leave Islam at home when I exit the house.