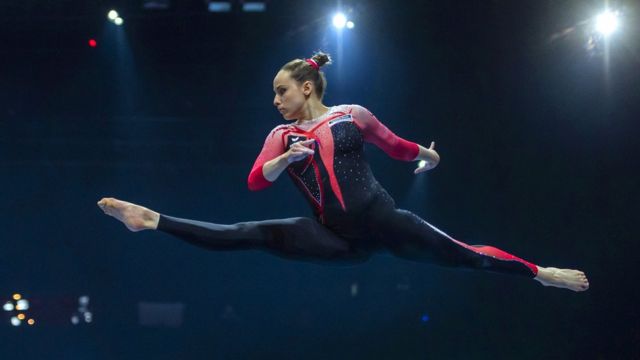 Germany’s women’s gymnastics team made a statement the minute they stepped into the venue for Tokyo Olympic qualifying on Sunday, swapping leotards for full-length bodysuits.

Several German gymnasts debuted the one-piece outfits, which cover all of their legs and most of their arms, at the European championships. And the Olympic team were wearing them in training at the Ariake Gymnastics Centre earlier this week, with three-time Olympian Elisabeth Seitz saying it was “about what feels comfortable”. “We wanted to show that every woman, everybody, should decide what to wear,” she said after Friday’s training. The team said then that they would vote on whether to wear the unitards during Sunday’s qualifiers. Appearing in the final session of the day, the team’s four athletes filed out onto the floor in the bodysuits, featuring bedazzled plum legs and a white upper portion.

In April, Seitz and teammates Sarah Voss and Kim Bui all wore the full coverage outfits. Voss said on Friday the team had agreed as group with their coaches to start competing in the bodysuits. “We were used to being in just a leotard on beam, and some girls said they wanted to feel more comfortable in training,” added the 21-year-old, competing at her first Games. “We are allowed to wear shorts (in training), so you don’t have the uncomfortable feeling of your leotard slipping when you have to do many routines a day.”

The decision, which Seitz has described as “an important signal”, also comes against the backdrop of a series of abuse scandals that have rocked the world of gymnastics in recent years. In the United States, former team doctor Larry Nassar was found guilty of sexually assaulting at least 265 identified victims over two decades, including star Simone Biles. In Britain, accusations of abuse have made headlines while in Greece former gymnasts complained of having suffered decades of abuse “akin to torture” at the hands of one of their coaches.