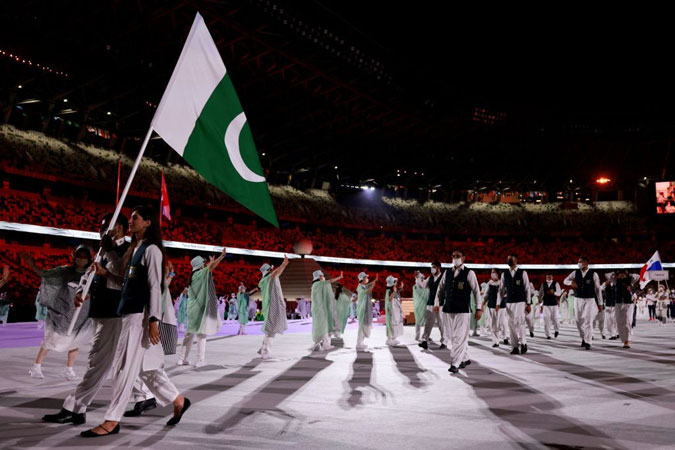 LAHORE: The International Olympic Committee (IOC) has warned it will take action in cases of “blatant” breaches of the COVID-19 rules in place at Tokyo 2020 after some athletes and officials paraded without masks during the Opening Ceremony on Friday night in Tokyo. Most of the athletes and other officials from Kyrgyzstan and Tajikistan who marched in the event –––- including the respective flag-bearers Kanykei Kubanychbekova and swimmer Denis Petrashov, and Tafur Rakhimov –––- did not cover their faces. Pakistan’s two flag-bearers, pistol shooter Khalil Akhtar and badminton player Mahoor Shahzad, were also spotted without masks during the Ceremony at the Olympic Stadium. Under the “playbooks” in force at the delayed Olympic Games, athletes are told to wear masks at all times and in all locations of the venues, with the exception of training, competing, eating, drinking or during interviews. Athletes have been allowed to remove their masks outdoors when they are more than two meters apart from others as a measure against heatstroke, however.

IOC executive director for the Olympic Games Christophe Dubi did not mention any countries or athletes by name and refused to say whether disciplinary measures would be opened, but promised action would be taken in cases of severe rule breaches. Dubi, speaking during an IOC and Tokyo 2020 press briefing on Saturday, said Chefs de Mission of teams competing at Tokyo 2020 had been reminded about wearing masks and other COVID-19 countermeasures prior to the Opening Ceremony. “It is really important that we go on message constantly to remind people how important it is to follow the social distancing rules, to use hand gels and wear masks,” Dubi said. “This was repeated to the Chefs de Mission and we will continue to repeat this. If you have blatant behaviours that are absolutely unbearable, we will definitely take action but it starts with informing and repeating this information so we don’t see too many people without masks.”

The IOC and Tokyo 2020 have claimed the playbooks have been designed to ensure the Games, pushed back to this year because of the COVID-19 pandemic, will be “safe and secure”. Health experts have claimed the Games could become a “super-spreader event”, while Shigeru Omi, the Japanese Government’s top COVID-19 advisor, has warned staging the Olympics during a pandemic is “abnormal”. There have been reports in the Japanese media about accredited people breaking the rules by visiting bars and restaurants in tourist areas, leading to a clampdown on participants involved in the Games. Tokyo is under a state of emergency until at least August 22 because of fears over rising COVID-19 cases, which led to the Japanese Government banning spectators from all Olympic events in the capital.