Govt provides all kind of support for ‘fair election’ in AJK : Gandapur 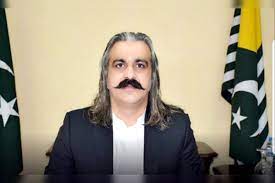 Addressing a press conference here, the minister said both the political parties Pakistan Muslim League Nawaz (PML-N) and Pakistan Peoples Party (PPP) have tried their best to spoil the election environment, but Pakistan Tahreek-e Insaf (PTI) thwarted all their efforts by keeping its party workers calm.

He cited the incident that took place when he, along with Minister for Communication and Postal Services Murad Saeed and other PTI leaders, who were heading to a public gathering in connection with the upcoming elections in Azad Kashmir when some infuriated people pelted stones near Jhelum Valley.

“We have decided not to respond to PML-N workers’ attempts to sabotage the general elections process as the whole democratic world is eying elections in the liberated territory,” he asserted.

He said he had informed the public before launching election campaign in AJK that the PML-N would promote Indian narrative in its public meeting addresses, adding  its vice-president Maryam Nawaz proved his saying by not uttering a single word against Modi’s tyranny and cruel measures in Indian Illegally Occupied Jammu and Kashmir (IIOJK).

Gandapur said the PTI would form a government after making a landslide victory in the general elections to the legislative assembly of Azad Jammu and Kashmir.

“We will secure a performance based victory in AJK polls as the federal government has doubled the funds for development projects in the valley,” he said.

The Kashmir Affairs Ministry, he said, had executed the development projects under Public Sector Development Programme (PSDP) that have been pending for the last over one decade.

He said the federal government had launched a project to build underground bunkers in around 57 villages for the safety of local residents living near the Line of Control (LoC).

Gandapur said his government has provided Sehat Insaf Cards to all residents of Azad Jammu and Kashmir, while the scope of  Ehsaas Cash Emergency Programme was being extended across the valley to help poor and needy people.

The minister said Prime Minister Imran Khan has internationalized the Kashmir cause by highlighting it at every international fora.

He said the Prime Minister, being an ambassador of Kashmiris, had presented their case of right of self-determination in the United Nations General Assembly in the best possible manner.