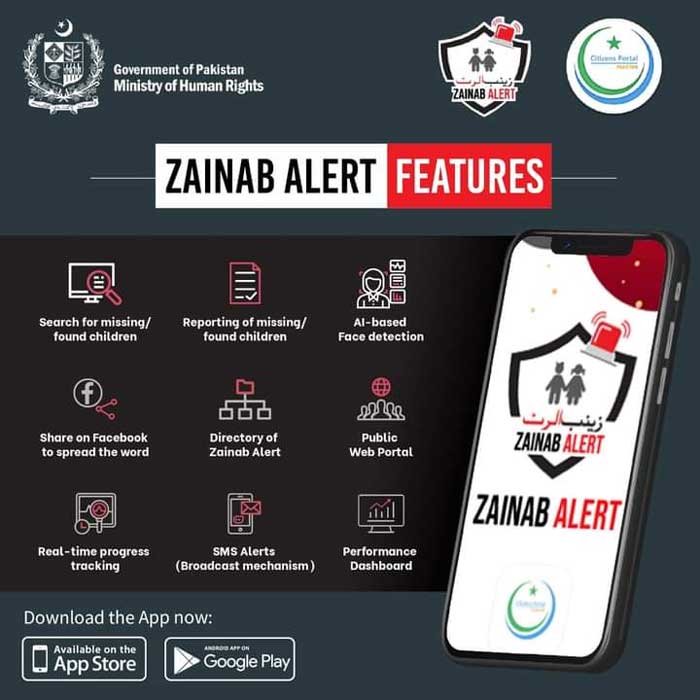 FAISALABAD: Police officers and officials across the country, including in Faisalabad, have expressed reluctance to install the “Zainab Alert” app on their mobile phones, which was introduced to curb kidnapping and abuse of minors.

As a result, the desired results of the development of this mobile application are being affected, while it is not possible to control the incidents of abduction and abuse of minors. The Punjab Police has taken stern notice of this situation and orders have been issued to the police officers and personnel of all the districts of Punjab including Faisalabad to install the “Zainab Alert” app in their mobiles soon.

The abduction and rape of Zainab, a minor girl from Kasur district during 2018, had shaken the government and especially the police. This was followed by the launch of a government-level mobile app called Zainab Alert to protect minors from abductions and abuse. And a few months ago, all police officers and officials across the country were instructed to install the Zainab Alert app on their mobile phones. The mobile app was also linked to other social media platforms and an awareness campaign was launched to create awareness among the public. What if a minor child of a family goes missing, it should be immediately reported on “Zainab Alert” so that the police chief and officials of the concerned district can take immediate action to find the minor child.

Several months after the mobile application Zainab Alert was launched, the majority of police officers and personnel across the country have not shown any interest in installing the app “Zainab Alert” on their mobile phones As a result, the Zainab Alert application not only failed to produce the desired results but also prevented the abduction and abuse of minors across the country. Punjab police officials have taken stern notice of this situation and have ordered that police officers and officials from all districts across Punjab should immediately install the Zainab Alert app in their mobile phones otherwise strict legal action will be taken against them.

A letter has been issued by the Additional Inspector General of Punjab Police to the Police Chiefs of all the districts. In which it has been clarified that he and all his subordinate police officers and personnel should install the mobile application Zainab Alert within a week. And learn how to use it and also inform different sections about the use of this app Zainab Alert. So that if any minor boy or girl in a district is reported missing from Zainab Alert, immediate action can be taken against him. The Additional IG also clarified that all the officers and personnel should install the mobile app Zainab Alert within a week and send its clearance certificate to the headquarters.