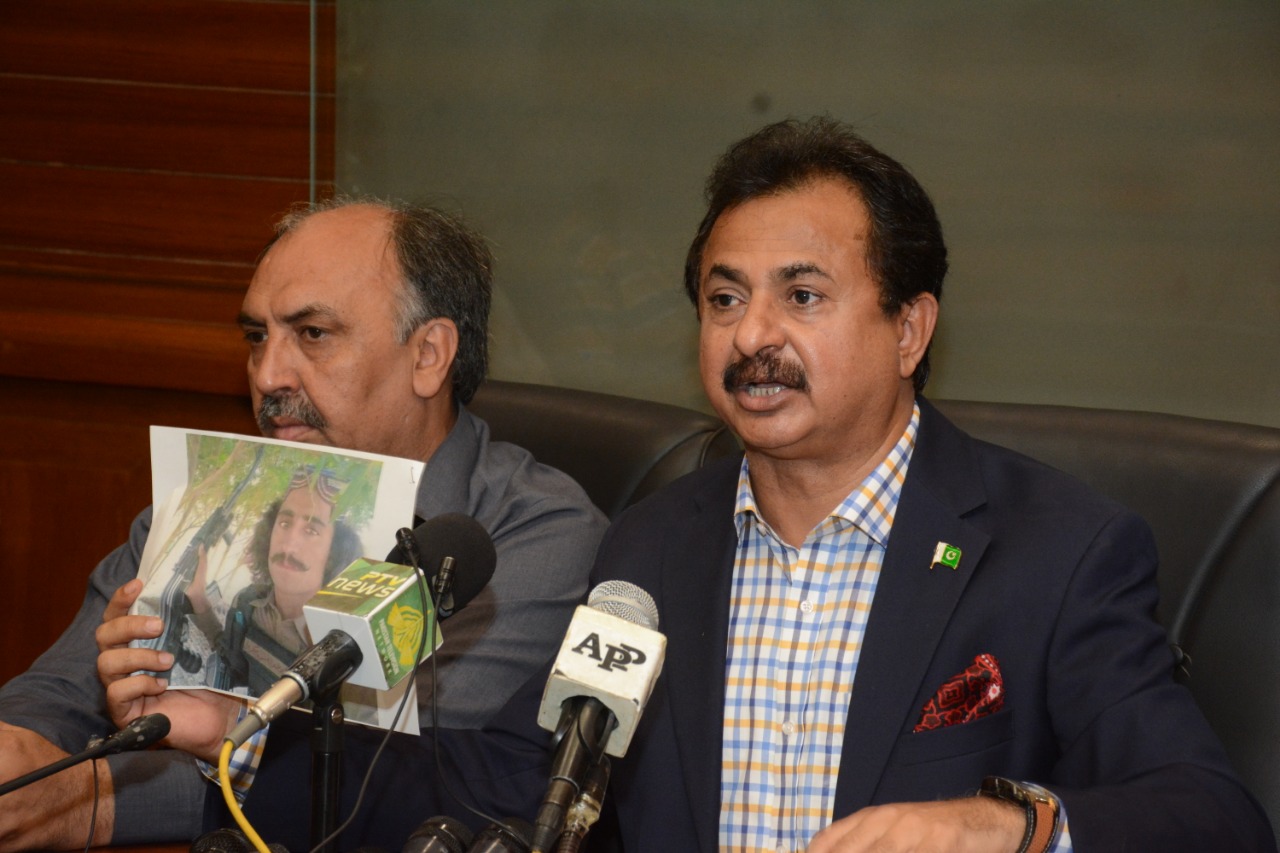 KARACHI: Mr Haleem Adil Sheikh, the Opposition Leader in Sindh Assembly, has demanded Prime Minister Imran Khan to launch a massive operation against bandits, criminals, and outlaws in Sindh by deploying Rangers personnel in the entire province to provide safety and security to the people of Sindh.

Mr Sheikh, on Sunday, along with PTI MPA Shahnawaz Jadoon, addressed the press conference in Sindh Assembly and alleged that the Sindh government had miserably failed to control the law and order situation in the entire province. Mr Sheikh, who is also the central vice president of PTI, said that due to the poor performance of police officials, including their head, Mr. Mushtaq Ahmed Mehar, no concerted efforts were being made to launch the effective operation to get rid of them forever.

He said the criminals operating both in Kacha/ riverine and in posh areas of the province had been left unbridled to create a law and order situation in every part of the province.

He said that criminals of both types had joined their hands and were killing, abducting, and robbing the people everywhere in Sindh. ” Sindh government despite spending the huge amount of over Rs 878 billion during past 13 years has miserably failed to protect the lives and properties of the people ” he said and added that nobody was feeling safe and secure when the outlaws both sitting in riverine areas and parliaments were roaming freely, and only personnel of Rangers could exterminate them through a massive operation in the all the troubled areas. He alleged that it would be next to impossible under the given situations to provide security to the people of the province when the criminals were being harboured by those sitting in parliaments and enjoying perks , power, and privileges, adding he said that those people were abetting the criminals from Kacha areas. Mr Sheikh said that when some police officials like Nasir Aftab, AD Khowaja, and others tried to bring improvement in the police department, they were forced to get themselves transferred from Sindh.

Mr Sheikh alleged that cops of the Special Security Unit (SSU), instead of being posted at the sensitive and troubled areas, had been posted at the Bilawal House to look after and guard the livestock of the royal family of Sindh.

He said that the Interior Minister Sheikh Rasheed Ahmed, soon after killing nine innocent people of the Chachar clan, had offered support to the high-ups of the Sindh government to launch the joint operation in the troubled areas against such gangs, but PPP rulers showed no interest.

Mr Sheikh also expressed his deep concern over the deteriorating law and order situation in Karachi. According to him, the crime rate had increased manifold as compared to Lahore in a year. The PTI leader said that as a man, as 22,295 robberies had been committed in various areas of Karachi only this year so far, and the incidents of mugging, thefts, and street crimes were on the steep rise. He alleged that people would continue to suffer such worst conditions until IG Mushtaq Mehar was not transferred and replaced with an honest and efficient officer in the province. The PTI leader alleged that high-ups of the Sindh government had crossed all the limits of committing the atrocities on their political rivals by using police officers. He alleged PPP rulers killed the manager of PTI leader Abdul Ghaffar Dharaj and then got him arrested in Naushero Feroze, attacked the houses of veteran politician Ghulam Murtaza Jatoi and got his agriculture land occupied.

He said that the police force from 18 districts was used against Ali Gohar Mehar to prevent him from organizing the community event in Ghotki district a few months back .” Such incidents are proof enough that PPP rulers have made Sindh into a living hell for their political opponents” he said. Mr Sheikh said that the political forces, having been fed up with the unabated atrocities being committed on them, were now trying to get rid of the most corrupt people imposed on Sindh. He said that PTI leaders and workers were being targeted in every district of Sindh.

He said that those notables being politically victimized by PPP rulers were now trying to get together to get rid of such callous rulers.

The PTI leader said that those friends who met in Larkana on Saturday against the injustices and atrocities by the PPP leaders through the police forces took a bold initiative. He assured them of their full support to get rid of the callous and criminal rulers. ” This is the high time to stand up against the corrupt, callous, cruel, and killers,” he added and hoped that more people would soon join them in their efforts to oust and to send such criminals behind bars for their criminal acts and massive corruption.

Mr Sheikh also requested Prime Minister Imran Khan to launch a crackdown on the influential persons to retrieve around 3.9 million acres of the land of the province.
Mr Sheikh alleged that most of the powerful people associated with the Pakistan Peoples Party had encroached upon the government lands of the province adding he said that as per the report, which was submitted in the Supreme Court of Pakistan by the officials of the forest department that 2.8 acres lands of their department were under the occupation of those influential people. ” The lands occupied by all influential people including Chief Minister Sindh Syed Murad Ali, his family members and the PPP leaders if retrieved and properly sold out, all international debts of the country will be cleared,” he added.
He said that there was a need of the hour to constitute an institution like the National Disaster Management Authority to get rid of the disastrous Sindh government, which according to him, had become a security risk for the province and its people. Mr Sheikh reiterated that people like Murtaza Wahab would not be allowed to play with the remaining infrastructure of Karachi, adding he said that all such attempts would be resisted and challenged in the courts of the law. He said that Mr Wahad had already created the mess in his two ministries and had failed to deliver. He said that the cabinet members also discussed the matter of Mr Wahab, and some members also extended the greetings to Mr. Wahab, adding he claimed that but they could not reach any consensus decision since some of the members, who also wanted to get the near ones appointed as the administrators in their respective cities and districts. He said that after the name of Mr Wahab was surfaced for the top slot in Karachi, infighting had erupted among the leaders of PPP for the same positions in Hyderabad and other districts. ” Karachi is not a toy which will be allowed to be played by this handsome boy,” he said. He said that incompetent rulers had already failed to reconstruct the 41 damaged gutter lines of Karachi Municipal Corporation and five hundred gutters of the district municipal corporations on the lame excuses. He said that the Federal government had already released Rs 35 billion for the construction of three big drains in Karachi. The work was about to be completed on those projects under the supervision of the officials of NDMA.

Mr Sheikh said that the plane of chief minister Sindh had been misused by the PPP leaders for the past 13 years, adding he claimed to have sought all the details of its travels and would share the same with media persons that how many times the government aircraft was misused like a rickshaw or taxi.

Mr Sheikh said that PPP ministers like Saeed Ghani and some MPAs, including one from Larkana, were spending the looted money of Sindh on the election campaign in Azad Kashmir. He said that ministers and PPP leaders with heavy bags had been staying in Kashmir to buy votes. He said that it was a matter of deep concern that a person like Seed Ghani had been staying in Kashmir for the past many weeks and was seen dancing in public gatherings while the education sector had been in shambles in Sindh. There was no responsible person to control the unfair means during the ongoing examinations.

The PTI leader said that it was very shameful that PPP rulers, instead of running the Covid vaccination center at Expo Center, were only busy in the photo sessions. ” The federal government has provided the vaccines to the provincial government, but the staffers were not being provided with the required facilities due to which on Saturday center remained shut down,” he added and said that it was enough to expose the tall claims of the PPP rulers that they were providing healthcare facilities including the vaccine against the deadly coronavirus. He said that those staffers who the government hired to vaccinate the people had not been paid their salaries for three months. He questioned that if they were not receiving the required funds from the Federal government, then how they had earmarked Rs 4. 32 billion for purchasing luxurious vehicles for ministers.

He said that the federal government had already provided enough vaccines to save the lives of people. Still, there was no such willingness on the part of the corrupt rulers of Sindh to effectively launch the drive to vaccinate the people against the deadly virus.
The PTI leader said that the Sindh health minister did not know herself how her department was being run . Mr Sheikh said that they had enough money to purchase the luxurious vehicles for the ministers at the time when the poor people were not being provided with ambulance service in the whole province. He asked PPP rulers to stop playing with the lives of the people of Sindh.

He came down on Chief Minister Sindh Syed Murad Ali for his failure to spend the funds on the development schemes adding he said that 52 percent budget meant for the annual development programme got lapsed, adding he held Mr Shah responsible for such terrible affairs of his government adding he remarked that it was the high time to get rid of such corrupt and incompetent people. He alleged that they had caused devastation and destruction in every department and turned the entire province into ruins.
Replying to a question , Mr Sheikh made it clear that they were not against recruitment of the jobless youths in different departments. Still, they were opposing the modus operandi of PPP rulers, who, according to him, wanted to sell the jobs through deputy commissioners and their brokers to earn money.

“When Sindh Public Service Commission could not give jobs on merit and was subsequently suspended by Sindh High Court, then how the DCs will ensure meritocracy in giving the jobs” questioned and announced to file the petition in Sindh High Court against such decisions of corrupt PPP government.

The PTI leader said that it was the responsibility of the PPP government to rescue the stranded people in inundated areas in Dadu district due to heavy rains and the subsequent flooding. He alleged that PPP MNA from Dadu, Rafiq Ahmed Jamali, who, according to him, committed the massive corruption, was responsible for such devastating situations in the flooded areas. He said that it was the responsibility of PPP rulers to provide rescue and relief to the affected people of Dadu district.

Mr Sheikh informed that a JIT was formed to probe the charges levelled against him by the Sindh government on his request. He said that the JIT would prove who was actually involved in the acts of terror during the by-polls.