All Blacks improving but not there yet, says Foster 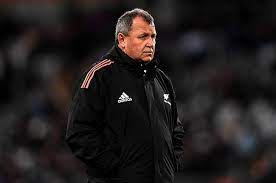 New Zealand coach Ian Foster declared himself satisfied with the shape of the All Blacks after three shakedown Tests, but said they needed to improve further before facing stronger challenges ahead.

With the All Blacks having set a goal of regaining the number one world ranking this year, Foster said the aim of the season-opening Tests against Tonga and Fiji was to “build some parts of our game”.

The performances may not have been good enough to strike fear into the hearts of Australia, South Africa and Argentina, who start rolling into the country from next month, but Foster found the effort to be promising.

“When we get the intention right, and we improve maybe the quality of our ball carrying and a bit more knowledge in our structures, we can actually get the speed of ball that we want,” he said following the 60-13 win in the second Test against Fiji in Hamilton on Saturday.

The All Blacks produced an overwhelming total of 219 points for and only 36 conceded in their warm-up Tests, which also included a lopsided 102-0 victory over Tonga and a 57-23 defeat of Fiji in the first Test.

But the Pacific island sides sit outside the world’s top 10 and never posed a serious threat, although Fiji at times did expose the All Blacks at the breakdown, particularly in the first Test where they dominated the collision area for 60 minutes before tiring.

Australia, who the All Blacks face in three weeks, just completed a narrow 2-1 series win over Six Nations runners-up France.

Argentina produced a win and a draw over an understrength Six Nations champions Wales, who have several players away with the British and Irish Lions.

Reigning world champions South Africa tune up with three Tests against the Lions, starting next weekend, followed by two Tests against both Argentina and Australia before confronting the All Blacks in September.

Foster believed that, apart from a few lineout misses, the All Blacks set piece was strong, particularly the scrum.

“However, we’ve got to get a little bit tidier early on in our defence,” he said.

In the second Fiji Test “we gave up a line break off a lineout early and we gave up a couple of offside penalties in our D (defence) line that we’ve got to be a little bit more disciplined at”, Foster added.

“So there’s plenty to go on but overall, when I look at the three Tests, I’m pretty delighted with where we’re at right now.”