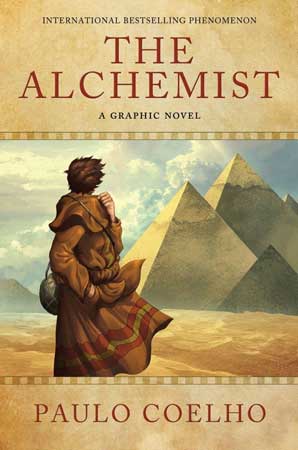 The Alchemist all starts with a boy having a dream. This boy’s name is Santiago, a young shepherd from Andalusian, Spain. He has the dream every time he sleeps under a sycamore tree that grows out of the ruins of a church. The dream is recurring again and again and in that dream, a child tells him to seek out treasure at the Egyptian Pyramids.

After that, he goes and consults a gypsy woman on this matter and surprisingly, the old woman tells him to go to Egypt to get the treasure. Later on, he also meets another person. Melchizedek, his name was. He was a magical old man who claimed to be the King of Salem. He also encouraged Santiago to go to Egypt and claimed that it was his “personal legend” to go to Egypt and claim that treasure. Melchizedek convinced Santiago to sell his flock of sheep and head to Tangier. Santiago reluctantly agrees and heads off to Tangier. There, unfortunately he is robbed, and all of the money that he had was gone.

He wandered around for a while before coming across a local crystal merchant. The merchant himself does not live a good life, because his business was not running well. It was fine before, but now it was all but dead. Santiago encourages the Merchant to take risks, but the merchant is reluctant to do so. After some heavy convincing, Santiago and the merchant finally go for it, and the business is running well once again. We get to know a lot about the crystal merchant. We know that he is a Muslim. The merchant wanted to go to Macca, but he felt that after performing Macca, but he fears that he will have nothing to live for once he’s pursued his dream.

After almost a year of staying in Tangier with the merchant, Santiago is now rich and plans to go back to Spain. However, there was a last-minute mind change for Santiago. He decided that with whatever earnings he had made, he would continue to pursue his personal legend and hunt for the treasure in Egypt. He says goodbye to the Merchant and he goes off in a caravan crossing the Sahara Desert to Egypt. While on the caravan, he meets two very important people, the Camel Driver and the Englishman. We come to know that the Englishman is also trying to pursue his personal legend and the Camel Driver has lived a sad life, but continues on living in the present as if nothing happened.

After that, the caravan makes a stop in Al-Fayoum, an oasis in the desert. There, Santiago and the group make an extended stay because of ongoing wars between tribes taking place all across the desert. While there, a lot of eventful things occurred. While over there, Santiago falls in love with a woman named Fatima. Santiago was so much in love with Fatima that he was even considering giving up his quest to stay here with Fatima. Luckily, Fatima understood and urged him to go on with his journey.

While walking in the desert, a vision occurred for Santiago. In that vision, he saw blood, dead bodies and more occurring in the same oasis that he was in. After seeing this vision, Santiago goes to warn several tribal chieftains. They eventually accepted his word, and as a result Al-Fayoum was successfully defended. After hearing Santiago’s story, the 200-year-old Alchemist emerges.

The Alchemist convinces him to leave Fatima and the caravan, and both of them set off to the Egyptian Pyramids to get the long-awaited treasure. Just days away from the treasure, Santiago and The Alchemist are captured by soldiers. However, in exchange for his life and the life of Santiago, the alchemist hands over to the tribe all of Santiago’s money and tells the soldiers that Santiago is a powerful alchemist who will turn into wind within three days. Santiago is scared as had never done this before, but on the third day, a miracle occurred. He disappears and reappears on the other side of the camp. Upon seeing this, the soldiers let The Alchemist and Santiago go.

The Alchemist leaves Santiago a few hours before reaching the pyramids. He gives him gold and Santiago embark on the journey alone. Santiago reaches the pyramids and begins digging. To his avail, two men come up to him and start beating him up, almost to death. Luckily, Santiago told them about his dream, and upon hearing this, the men let him live. One man even told him about the worthlessness of these dreams by telling his own. In his dream, there was also a treasure, and the place was an abandoned church in Spain where a sycamore tree grows. The same exact place where Santiago first had the dream. Upon returning to Spain, he saw a chest of jewels and gold buried under the tree and had plans of returning to Al-Fayoum, where he would reunite with his long-lost love, Fatima.

The Alchemist sends firm messages across the book. It encourages you to follow your personal calling or legend no matter what the costs. The Merchant is an example of an unfulfilled life. By not going to Macca, and not doing what he always wanted to do, he will die living an unfulfilled life. He argued that if he did go to Macca, then there would be nothing to live for, but experiences will always be made later on, even after you’ve fulfilled your dreams. Though the merchant is a fictional character, his life really represents a lot of people around the globe, and by reading this book, you really get an understanding of what it is like to live an unfulfilled life. I consider this a warning- a warning from the author to not be like the merchant, because if you do not do what you dream of doing, then, just like the merchant, you will live a miserable life.

Even Santiago is a good example of why you should follow your personal calling. Santiago was told by his parents that he must be a Priest but he says that he wants to travel, and decides to become a shepherd. Later on, he decides to follow his own heart to go and travel to Egypt to find the treasure and to listen to the language of the omens. Santiago faces many obstacles on his journey to Egypt, but he does not give up and follows his heart and his soul.

Another essential part to the merchant’s character is that he does not like to take risks and is a very fearful man. Because of being fearful and not taking risks, his business failed, and ultimately, he didn’t live a very good life. It took many days and entirely another person to convince the merchant to take some risks, and it paid off. So take risks, because they may just pay off.

The Alchemist is a lovely book that has everything in it. Not only is it a great and entertaining story with lovely characters and quality character development, it also sends key messages throughout the book, and on top of all this, it is a very short read with only 166 pages. So, if you’re looking for all of the things above, I really recommend reading this beautiful and entertaining book.