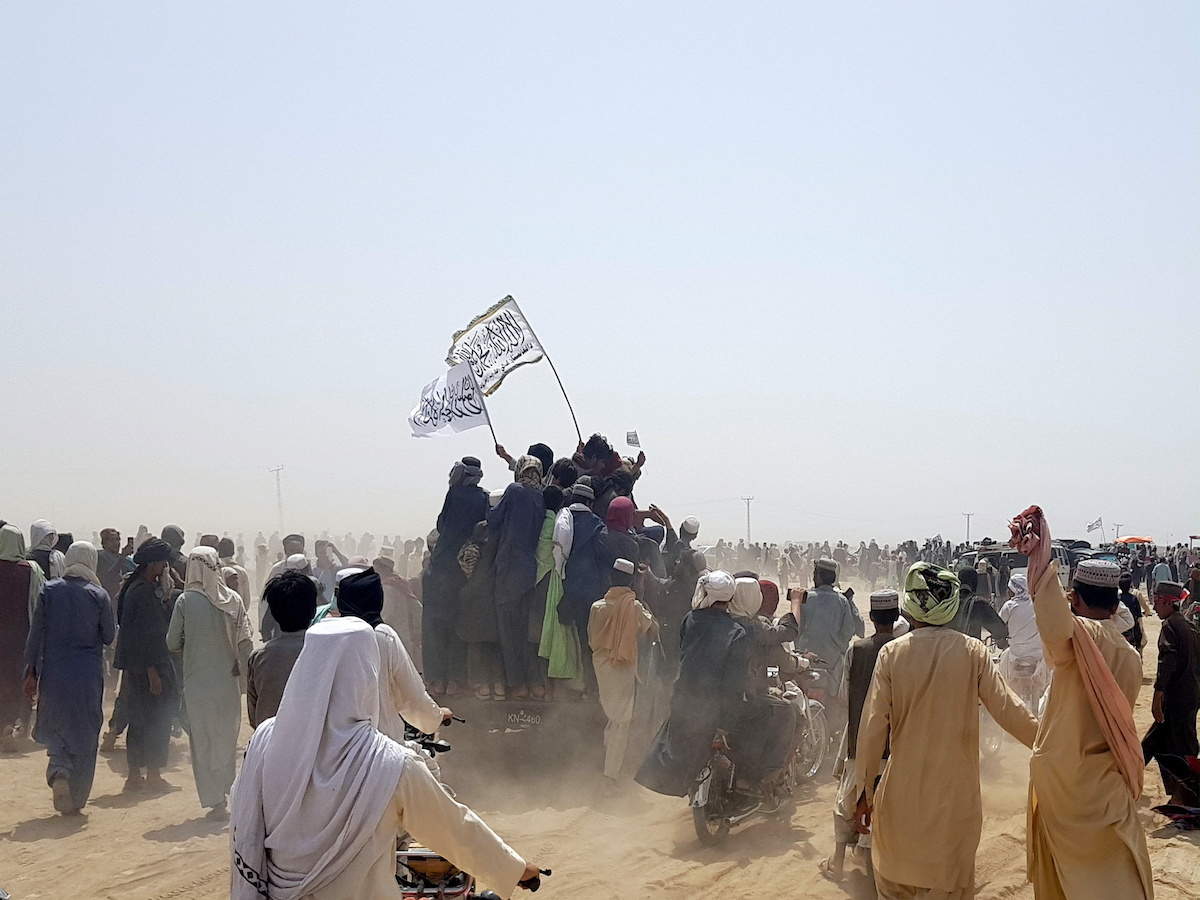 Afghan forces clashed Friday with Taliban fighters in Spin Boldak after launching an operation to retake a key border crossing with Pakistan, as the insurgents tightened their grip in the north and battled for the stronghold of an infamous warlord.

The battle at the southern border follows weeks of intensifying fighting across Afghanistan, with the Taliban pressing multiple offensives and overrunning dozens of districts at a staggering rate.

The group have also gobbled up other vital border crossings in the north and west.

Following fierce fighting on Thursday evening, dozens of wounded Taliban fighters were being treated at a Pakistan hospital near the border after fierce overnight fighting, AFP correspondents at the scene reported.

“We have suffered one death and dozens of our fighters have got injured,” Mullah Muhammad Hassan, who identified himself as a Taliban insurgent, told AFP near Chaman in Pakistan, about five kilometres (three miles) from the border.

Reuters news agency said Friday one of its photographers had been killed in the Spin Boldak fighting, citing an Afghan army commander.

Danish Siddiqui, an Indian national, was part of a team that shared a Pulitzer Prize in 2018 and had been embedded with Afghan special forces, the agency said.

The Spin Boldak-Chaman border crossing has long been an economic lifeline for much of southern Afghanistan.

The landlocked country depends on the crucial commercial artery to export much of its agricultural produce, such as almonds and dried fruits, while also serving as the entry point for finished goods coming from Pakistan.

Controlling the border crossing will likely provide the Taliban with an economic windfall, allowing the insurgents to tax the thousands of vehicles that pass through the frontier daily.

Residents of Spin Boldak, which fell to the Taliban on Wednesday, said the insurgents and the army had been locked in vicious street fighting in the main bazaar of the border town.

The fight for the border comes as the Taliban also closed in on the stronghold of long-time foe Abdul Rashid Dostum in the north, with the insurgent group’s spokesman saying the warlord’s militia forces had fled Sheberghan, the capital of Jowzjan province.

The group had “captured the gate” of the city, Taliban spokesman Zabihullah Mujahid said in a WhatsApp message, adding: “Dostum’s militia left the city and fled towards the airport.”

The deputy governor of Jowzjan confirmed that the Taliban had reached the gates of the provincial capital, but said government forces were pushing back against the militants.

For years, Dostum has overseen one of the largest militias in the north, which garnered a fearsome reputation in its fight with the Taliban in the 1990s — along with accusations that his forces massacred thousands of insurgent prisoners of war.

A rout or retreat of his fighters would dent the Kabul government’s recent hopes that militia groups could help bolster the country’s overstretched military.

As fighting raged over larges swathes of Afghanistan, a war of words was also heating up between Kabul and Islamabad after the Afghan vice president accused the Pakistani military of providing “close air support to Taliban in certain areas”.

Pakistan strongly denied the claim, with a foreign ministry statement saying the country “took necessary measures within its territory to safeguard our own troops and population”.

“We acknowledge the Afghan government’s right to undertake actions on its sovereign territory,” it added.

Afghanistan’s southern border has long been a flashpoint in relations with its eastern neighbour.

Pakistan’s Balochistan province has been home to the Taliban’s top leadership for decades, along with a large contingent of reserve fighters who regularly enter Afghanistan to bolster their ranks.

As fighting continued, Pakistan said Thursday it would hold a special conference on Afghanistan in Islamabad at the weekend, although Taliban officials had not been invited and questions swirled whether the meeting would actually happen.

There were signs too that official talks in Doha — which have stalled for months — could stutter back to life, with several high-ranking officials flying out of Kabul on Friday afternoon.

The Taliban have capitalised on the last stages of the withdrawal of foreign troops from Afghanistan to launch a series of lightning offensives across the country.

Foreign troops have been in Afghanistan for nearly two decades following the US-led invasion launched in the aftermath of the September 11 attacks.

They have appeared largely out of the picture in recent months, but fears are growing that Afghan forces will be overwhelmed without the vital air support they provide.

The speed and scale of the Taliban onslaught have caught many by surprise, with analysts saying it appears aimed at forcing the government to sue for peace on the insurgents’ terms or suffer complete military defeat.