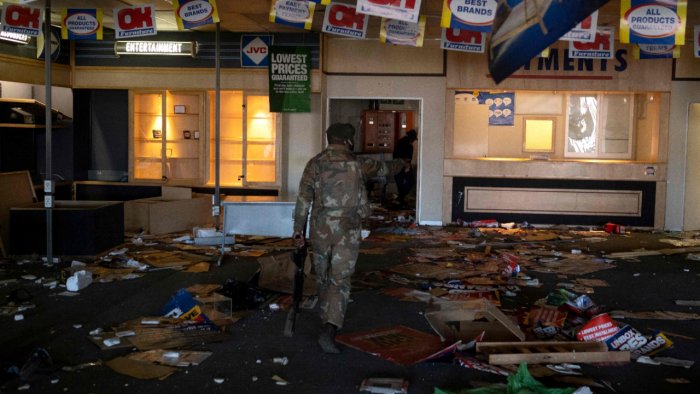 The death toll from five days of violence in South Africa has risen to 72, police said Tuesday, despite President Cyril Ramaphosa’s deployment of troops to quell the unrest.

“The total number of people who have lost their lives since the beginning of these protests …has risen to 72,” police said in a statement. Police said most of the deaths “relate to stampedes that occurred during incidents of looting of shops” with others resulting from shootings and explosions at bank automatic cash machines. The raging unrest first erupted last Friday after former president Jacob Zuma started serving a 15-month term for contempt after snubbing a probe into the corruption that stained his nine years in power. By the weekend it started spreading to Gauteng province, and police said on Tuesday there had been a few incidents in the eastern province of Mpumalanga and the Northern Cape. Ramaphosa on Monday deployed troops to help overwhelmed police as the looting and burning of buildings spread across parts of two of the most populous provinces of KwaZulu-Natal and Gauteng, which includes Johannesburg.

The number of arrests have risen significantly to 1,234, although thousands upon thousands have been involved in ransacking businesses, factories and retail centres.