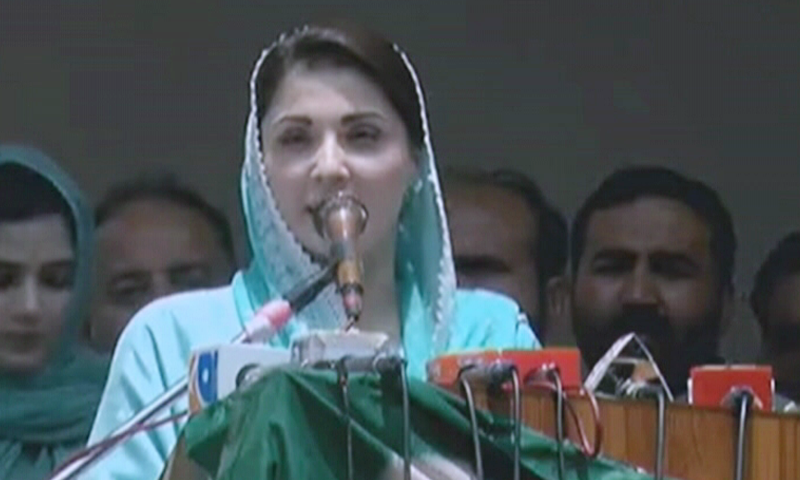 LEEPA: PML-N Vice President Maryam Nawaz, in an address to the masses in Leepa, has said that the position of PTI looks very weak in Azad Jammu and Kashmir, foreseeing her party’s win in the upcoming AJK elections.

She said if the country wanted to achieve success, then the institutions should accept Nawaz Sharif’s narrative. “Nawaz is the son of this soil and he is patriotic,” she added. She maintained that soon all would use the same jargon as was used by their leader.

Maryam was addressing a public rally in connection with the AJK election in Leepa, Azad Kashmir on Monday. Seeing people’s enthusiasm, she said it looked like that the Lion (election symbol of her party) was again coming to the valley and asked the thieves of flour and sugar to leave the nation alone.

Without naming anyone, she said many people hatched a propaganda against Nawaz Sharif and dubbed him “anti-army”.

“Such elements should be ashamed of themselves, because it was also Nawaz Sharif who had raised salaries of the Pakistan Army in his tenure,” she said, adding that Nawaz was a true son of the soil as “even his enemies acknowledge his patriotism.”

Kashmiris’ livelihood was not in the federal government’s hands, it’s in the hands of God, she added. She was of the view that if Kashmiris got funds from the federal budget, it was their right.

She said she would not let anyone snatch the rights of the Kashmiris and stated that the last time Kashmiri soldiers got a pay raise, it was in Nawaz Sharif’s tenure. She stated whenever the defense budget increased; it was in Nawaz’s stint. She flayed Imran Khan’s government for not raising the emoluments of the soldiers.

Maryam also lambasted the government over inflation revealing that insulin had reached a peak of Rs 1100 per dose which was previously at Rs 400.

Maryam told her Kashmiri supporters that she had heard that Prime Minister Imran Khan was coming there to beg for votes.

“I would advise Imran Khan to not waste his time by showing up in Kashmir because people here have given their verdict [in favour of the PML-N],” she added.

She maintained that the government could not prove any corruption cases against Nawaz and Shehbaz Sharif neither were they proved against Shahid Khaqan Abbasi and Hamza Shehbaz and expressed that the PML-N knew how to retrieve stolen votes.

She said she was the first woman who was incarcerated in NAB’s cell and also spent three months in the death cell of Kot Lakhpat Jail. She reminisced that she was told by the NAB people if she did not utter harsh words then she could have avoided the punishment but that did not stop her from expressing what she wanted to say.

Maryam said Imran had leveled wrong corruption charges against the members of Sharif family asking the PM to seek forgiveness from Allah.

Earlier, responding to chants of ‘Go Niazi Go’ from the crowd, Maryam said she would prefer to say “Go Imran Go”, remarking that all Niazis were respectable to her.