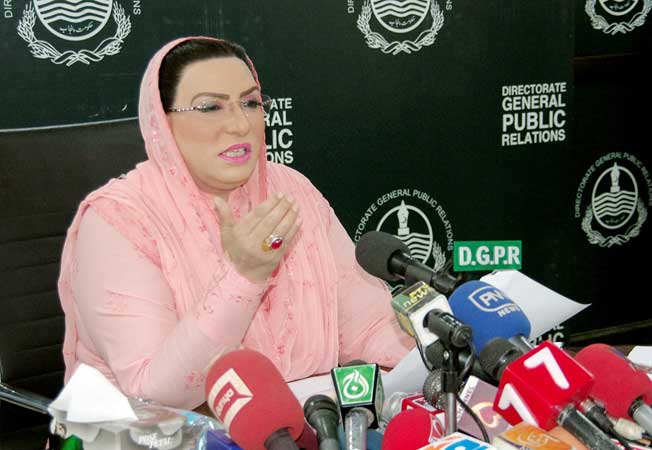 SIALKOT: Special Assistant to Chief Minister (SACM) Punjab on Information Dr Firdous Ashiq Awan has said that the Punjab government is striving to contain dengue and there is dire need to create awareness among people to prevent its spread.

She expressed these views while addressing a district anti-dengue seminar, organised by the Sialkot district administration here on Saturday.

Dr Firdous said that efforts of lady health workers to raise awareness in the community were commendable.

The SACM said that ‘Showbaz Sharif’ had built concrete structures for kickbacks in Punjab.

Huge projects were built by the commission mafia and today the Pakistan Tehreek-e-Insaf (PTI) government was paying those loans with interest.

The money that should have been spent for a healthy and strong Pakistan for the next generation was spent on ‘Rang Bazi’ [showy projects], she said.

Dr Firdous said that for implementing Prime Minister Imran Khan’s vision, the Punjab government had provided health insurance of Rs 720,000 to Rs 1,000,000 to 29.2 million families in Punjab through the universal health programme.

Funds of Rs 98 billion had been allocated for the purpose, she added.

She said that no new hospital was built in Sialkot district since 1962 and now the PTI government was going to build a 1,000-bed hospital in the city. She said that a Mother and Child Care Hospital was also being constructed in the district.

About the upcoming elections in Azad Jammu and Kashmir (AJK), she said the opposition political parties were challenging Prime Minister Imran Khan instead of Modi by doing negative politics on Kashmir.

She said that the opposition should not rub salt into the wounds of oppressed people of occupied Kashmir for a few seats there.

She said that Kashmiris of occupied Kashmir were looking towards the leadership of Pakistan.

Under Prime Minister Imran Khan’s leadership, Pakistan’s foreign policy was working to shake the conscience of the world, she added.