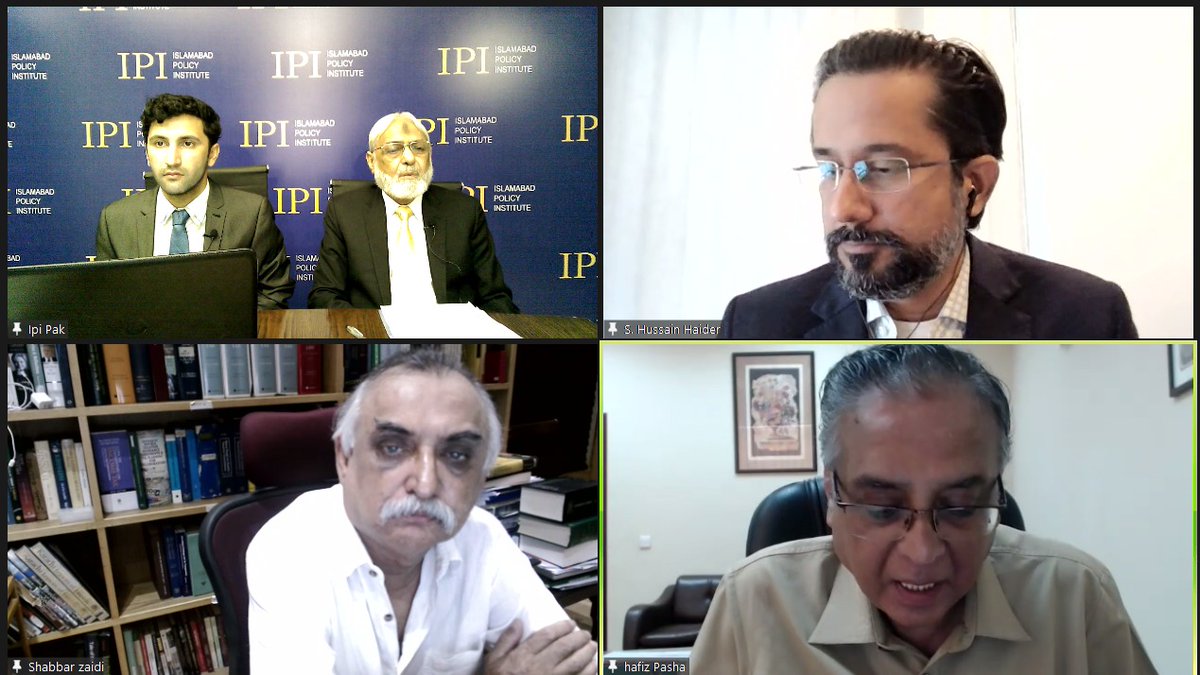 Islamabad: Economic policy cannot be successful until and unless it benefits the common man. This was conclusion of a discussion titled ‘Growth and Sustainability – Hand in hand or poles apart’ hosted by Islamabad Policy Institute, according to a press release issued by the think tanks on Friday. The discussion was participated by Former Finance Minister, Dr Hafiz Pasha and former Chairman FBR, Mr. Shabbar Zaidi. Equity market veteran and senior fellow at IPI Mr. Hussain Haider moderated the event.

The panellists highlighted that policy failures of the past decades are reflected in the “elite capture” visible today which forms a great barrier to unlocking Pakistan’s immense potential.

In his opening remarks, Executive Director IPI, Prof. Sajjad Bokhari noted that Pakistan has fallen behind its regional peers. Even though countless internal and external challenges are generally blamed for this decline, it is the absence of policy consistency and widespread political instability which continue to standstill the efforts for building strong foundations for sustainable economic growth and development.

While Dr. Pasha agreed with the notion that there is plenty of work to be done, he did applaud not just the government’s bottom-up approach but also the Prime Minister Imran Khan’s resolute stance on not allowing Pakistan to become a client state yet again.

He emphasized on the need for a 7-8% GDP growth rate to absorb the large idle youth, alleviate poverty and to manage the increasing public debt. This he opined was not possible without high levels of savings and investments, an equitable taxation system and growth in exports. On fiscal policy, Dr. Pasha was of the view that expenditures need to be re-prioritized; while Highways and mass transits are indeed important, the pressing priority at the moment should be to focus on water resources and the transmission & distribution system of the power sector. He went as far as to say that half the PSDP should ideally be spent on these areas instead of the NHA.

On fiscal deficit, Dr. Pasha was of the view that the government’s claim of a 6.3% deficit is unrealistic. Even if it remains at 8%, it will be a laudable work, he added. Mr. Shabbar Zaidi mentioned that so far, the growth models employed have failed in reducing income inequality. In fact, he drew attention to how the taxation system has been at the root of the problem. According to him, the success of a capitalist system pivots on two things: tax collection and government efficiency. If society doesn’t get a fair share of the wealth, the society would collapse, he warned.

He emphasized that GDP composition should be a key area of focus given how the labour-intensive Agriculture and Manufacturing have lagged in the past few years in Pakistan. The absence of substantial investments in these sectors is among the reasons that our economic growth lacks depth. Mr. Zaidi very candidly stated that more often than not, policy makers at the helm of the affairs are deliberately kept at arms-length from the ground reality by creating confusion in the details.

On the implementation framework, Dr. Pasha believes that the need of the hour is a Charter of Economy where devolution of power to the third tier of government is of utmost importance. Furthermore, bodies such as the National Economic Council & the Council of Common Interests need to be rejuvenated. Mr. Zaidi opined that if the economy is to be kept out of the ICU, the real issues at hand will have to take priority over political jabs and point-scoring.

Mr. Hussain Haider broached the subject of our bourgeoning population which although has been doubling almost every 25 years still remains overlooked. “In this context, even the best economic model would struggle to sustain economic growth. This issue needs to be talked about and if not now, when,” he questioned.