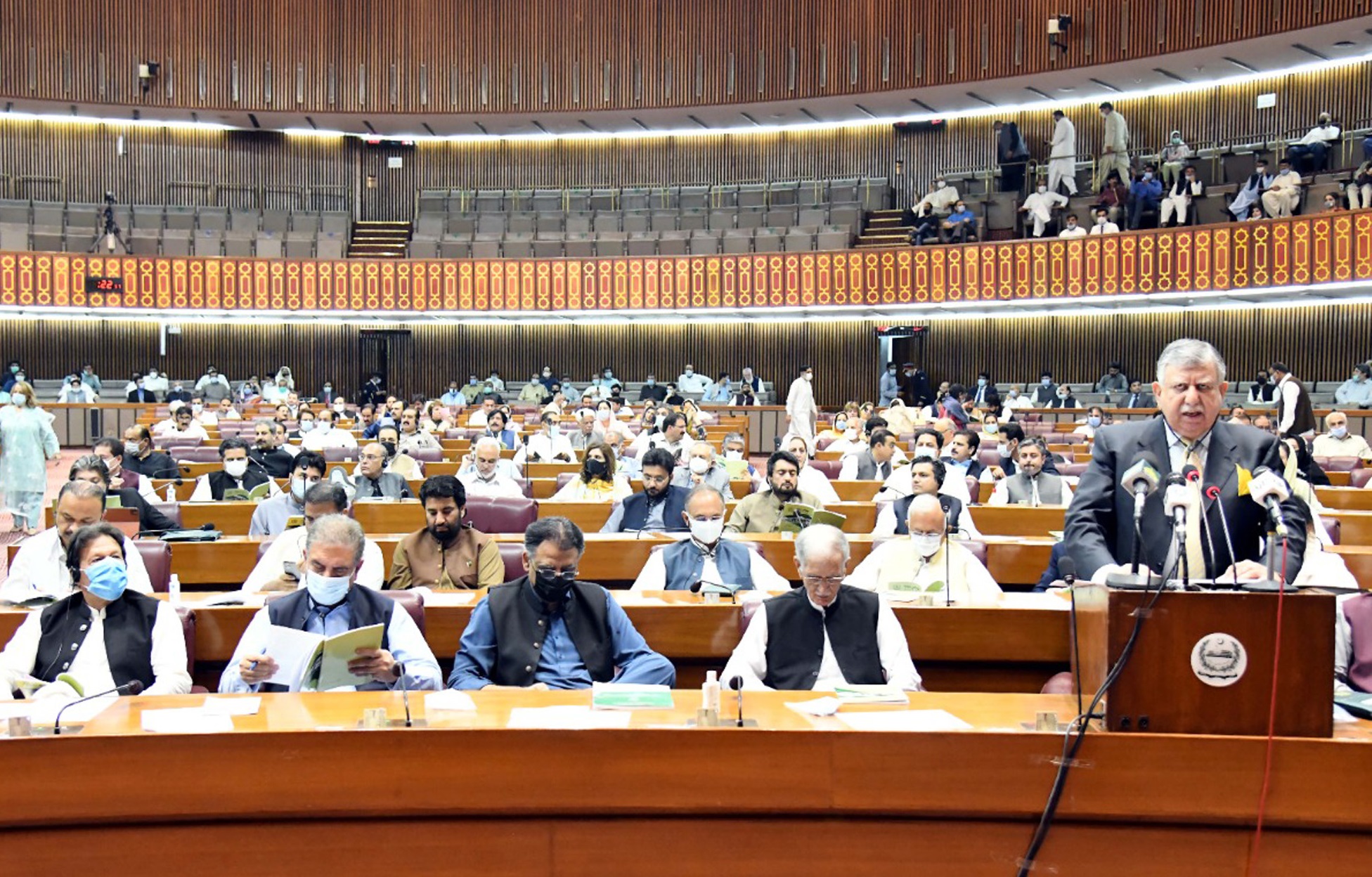 ISLAMABAD: Minister for Finance Shaukat Tarin on Friday said that the government had taken several measures in order to provide tax relief to already tax payers, besides introducing steps to enhance tax to GDP ratio, which was at the lowest level as compared the regional countries.

Presenting the federal budget 2021-22 in the National Assembly, he said that during current year historic refunds were paid which were 119 percent higher than the corresponding period of last year. Highlighting the tax measures in the budget, he said that these initiatives were need of the hour.

Shaukat Tarin said that he planned to fundamentally restructure the tax regime and working of the tax administration. He said that the proposed tax policy would emphasize on expansion of tax base through identification of new tax payers, gradual removal of exemptions and concessionary provisions and reduction in tax rate.

The government would also protect the existing tax payers so that no further burden is placed on their tax liabilities. At the outset our tax policy would be based on the principals of restoring the purity of self-assessment scheme, which would be mean that except there is any definitive information’ contrary to the information disclosed in a tax return, all tax returns shall be deemed as assessment orders, he added.

He said that the returns under self-assessment scheme would only be subjected to audit once they are chosen through an automated risk-based selection procedure, furthermore, we would make use of outside auditors for carrying out the audit, which will be done remotely through an e-Audit system. These audits would be very serious and willful evasion shall be considered a criminal offense carrying a jail term, adding that we will strive to hit hard on harassment of taxpayers.

The two taxes; tax on income and tax on consumption would be the primary instruments of tax mobilisation, he said adding that government will reorient the tax machinery to go after tax evaders, identify those who are outside the tax net when they should be inside, and make extensive use of information technology to detect prospective taxpayers and reach out to them through the use of electronic communications, thereby eliminating personal contact with the taxpayers.

Progressivity in taxation shall be further strengthened, the rich will be asked to pay their due share in taxes, he said, adding that exemptions available to powerful groups shall be removed. Tarin said that no new taxes shall be imposed on the salaried class, the system of track and trace will be implemented initially with four industries but would be expanded to the full spectrum of industrial and trading activities.

A major plank of our strategy would be the expansion of GST base and in this regard, we would bring into the tax net all retail and wholesale transactions which are using emerging and evolving digital and electronic payment systems. To this effect, we would help traders install the point-of-sale (POS) equipment and link it up to the FBR system.

Shukat Tarin said that in order to facilitate the tax payers Pakistan Single Window shell be operational in near future, adding that the activities connected with the clearance of imports , exports on a single portal which would lead to significant reduction in the number of days required for cargo clearance.

The work on harmonization of sales tax on services with the provinces is moving apace and would be made fully operational during the year, he said adding that government would simplify the system of tax through introduction of new simplified tax return forms and new tax code and rules.

Besides, he said that specific tax policy proposals included in the Finance Bill 2021 on Sales Tax and Federal Excise Duty, adding that in Sales Tax and Federal Excise Duty, the government were giving the relief measures including enhancement of threshold for cottage industry. The small businesses are the backbone of our economy as they create maximum job opportunities and provide subsistence to significant number of people, he said.

He said that to facilitate small businesses, threshold of annual turnover is being enhanced now a cottage industry having annual turnover of up to Rs 10 million will not be required to register for sales tax. Previously, he said a small business having turnover of Rs 3 million per annum was required to register and face the hassle of filing monthly sales tax returns, he added.

The minister said that in order to promote ease of doing business as well as to facilitate the registered persons and enhancing ease of doing business, the government is proposing various schemes such as allowing constructive payment for adjusting payable and receivable under section 73 of sales tax law, doubling the tier-I retailer shop area requirement for furniture business and enhancing the scope of compensation for delayed refunds, and excluding advance payment from chargeability of sales tax.

The government has proposed withdrawal of FED and Reduction in Sales Tax on Locally Manufactured cars up to 850 cc, he said adding that rising prices of locally manufactured small cars is a major concern for low earning families. Accordingly, it is proposed that small cam up to 850 cc capacity may be exempted from levy of FE besides reducing Sales Tax rate from 17% to 12.5%.

Withdrawal of value addition tax on import of electric vehicles and CKD kits and withdrawal of federal excise duty on 4-wheelers electric vehicles were also proposed, he added. Regarding the Sales tax exemption to auto disable syringes and oxygen cylinders, he said that COVID-19 has badly damaged entire human race and global economy. To mitigate adverse effects of this killer virus and debilitating diseases such as Hepatitis, we have been taking several measures, which include tax exemption on import of auto disable syringes and their raw material and exemption on oxygen cylinders.

Exemption to Special Technology Zones (STZ) as technological revolution would bring sustainable economic growth and reduce poverty, he said adding that for this purpose, STZ are being established throughout the country. To encourage investment in these IT zones, tax exemption on import of plant, machinery, equipment, and raw materials is being proposed.

Food security is a major challenge for our government despite being agricultural country, he said that accordingly, to facilitate the farmer and encourage storage of grain and agricultural activity and improve shelf lives of commodities, in the rural areas, it is proposed to grant exemption on locally produced silos. This initiative is part of the Prime Minister’s comprehensive Agriculture Transformation Plan.

To facilitate businesses and provide relief to the general masses, rate of federal excise duty on telecommunication is proposed to be reduced from 17% to 16%, he said. He said that major initiative taken by the government is the introduction of concept of Tier-1 retailers and their integration with FBR. On this front, the government have received encouraging results and substantial revenues, he said. He said that this year, “we foresee speedy integration of remaining retailers by way of offering more facilitation and concessions.”

All POS holders will be included in Tier-1. In addition, we are proposing new prize scheme for the customers making purchases from Tier-1 retailers integrated with FBR. The monthly prizes of Rs 250 million will be disbursed to customers holding system generated invoices issued by Tier-1 retailers integrated with FBR through computer random balloting, he added.

Bringing 0-commerce transactions in sales tax not: We have seen extraordinary sales through online marketplaces especially due to Covid-19 lockdowns. However, contribution made by these e-commerce digital platforms in national exchequer is negligible. Accordingly, it is proposed to bring third party sales made through established online marketplaces within the purview of sales tax.

One of the major concerns of our times is the availability of counterfeit goods especially cigarettes in the market. Although we have already introduced the mechanism of Trace & Track system, which is in the process of implementation; however, to enforce more stringent measures, legal requirement of registration of brand licenses is being introduced, he added.

He said that through this measure, all the manufacturers of specified goods will be legally required to get registered their brands with FBR and accordingly unregistered brands will be treated as counterfeit goods liable for outright confiscation and destruction.

Telecommunication in the country witnessed robust growth over period of time, he said adding that to reap reasonable level, Federal Excise on mobile phone calls exceeding 03 Minutes, Internet data usage and SMS messages is being proposed this will result into mild taxation of a broad spectrum of population.

Sugar is although not a staple food, is still a source of daily caloric intake for millions of people in Pakistan, he said adding that recently, an unprecedented increase in the prices of sugar has been witnessed. However, this increase has not resulted in corresponding increase in revenue due to that fact that for the purposes of sales tax the value of sugar is not ad-valorem but specific that is Rs.60 per kg which is considerably below the actual market price of the commodity.

To address this anomaly, sugar is proposed to be included in the Third Schedule to the Sales Tax Act so that tax is charged on actual retail price of the product, he said adding that this measure would not only ensure due payment of tax but also help in putting a more effective price control mechanism.

Shaukat Tarin said that the government has proposed reduced rate of tax for certain services as many services carry low margins and higher withholding rate is causing problem for them, adding that therefore, it is proposed that withholding tax on oilfield services, warehousing services, security services, logistic services, telecommunication services and collateral management services may be reduced to 3% from existing 8%.

In order to Covid-19 pandemic, the capital market has been alleviated the difficulties faced by the stock market in the past two years, it is proposed that the rate of capital gain tax be reduced to 12 5% from 15%, he said adding that adjustment of Losses against Property Income under present legal dispensation current year business loss is adjustable against income under all heads except property and salary income.

This is causing hardship to many businesses. As property income has been brought under normal tax regime therefore, current year business loss has also been allowed to be adjusted against property income, he added. Unconditional Grant of Exemption from Tax to Different Organizations proposed as law provides for conditional and unconditional exemptions to different organizations, he said adding that to encourage philanthropy NGOs like Abdul Sattar Edhi Foundation, Indus Hospital and Network, Patient’s Aid Foundation, Sundus Foundation, The Citizen Foundation, Ali Zaib Foundation these are proposed to be placed in the list of unconditional exempt entities.

To promote  IT services,  freelancers and export of other services, a special regime at par with export of goods regime is proposed all services receipts which are brought to Pakistan through banking channel shall be taxed at a reduced rate of 1% under final tax regime and no question thereafter shall be asked about it, he added. Special Economic Zones are a key project of CPEC, he said adding they were exempted from tax however, under the law they are still liable to pay minimum tax on their turnover.