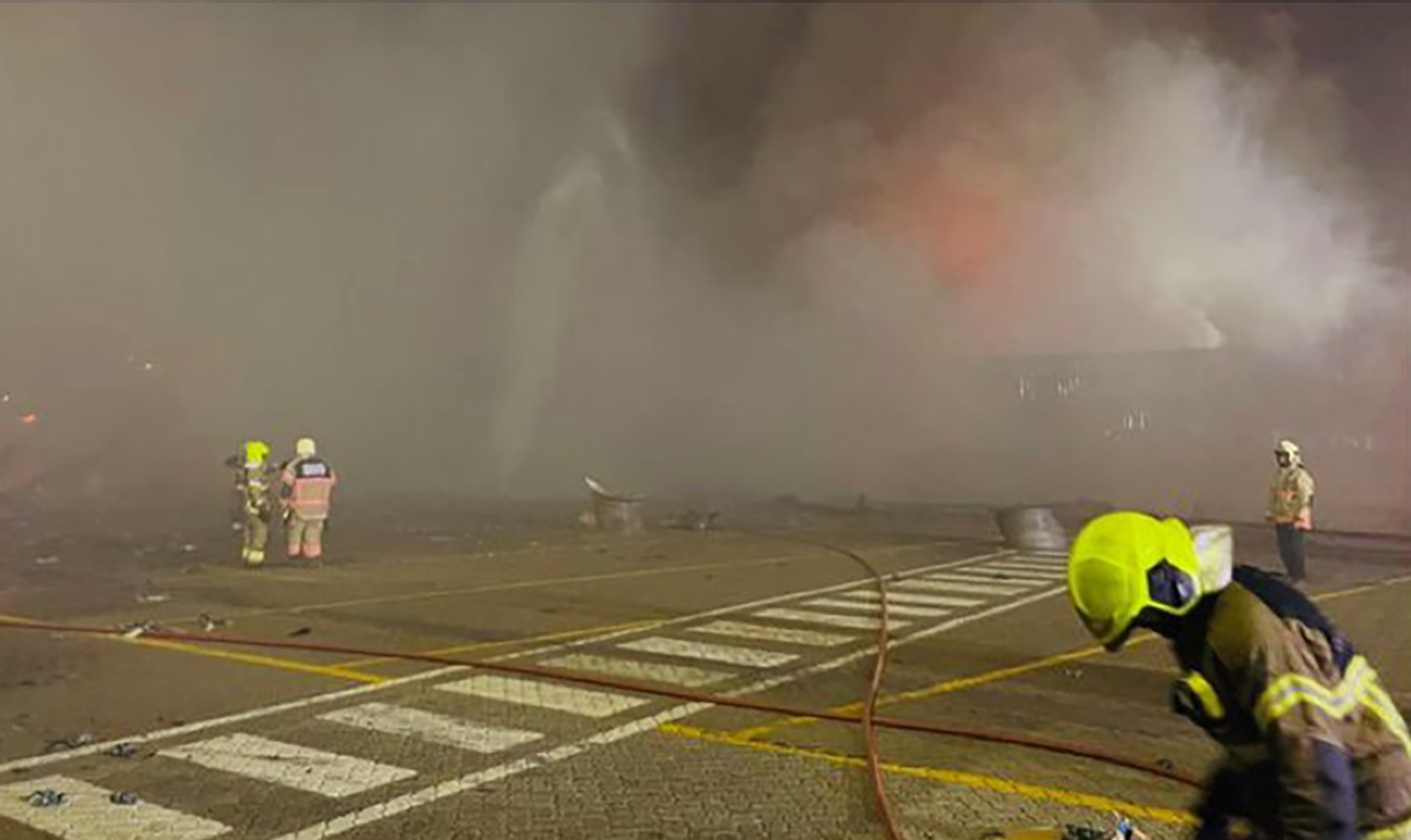 Dubai authorities were Thursday investigating an explosion on a container ship carrying flammable materials, which unleashed a fireball at one of the world’s busiest ports and sent shock waves through the city.

Firefighters rushed to the scene at Jebel Ali Port to tackle the blaze that broke out on a large vessel stacked with containers which authorities said had been preparing to dock. Flames and smoke poured from the ship but authorities said it was doused within 40 minutes and that there were no casualties, with all 14 crew members evacuated in time before the explosion. “Thank God, everything is safe. But this is a natural accident that happened in one of the containers, which was also carrying some flammable materials. There was no other reason,” Mona Al Marri, director of the Dubai Media Office, told Al-Arabiya television. She said there will be an investigation into the cause of the blast. Police vehicles and fire trucks were Thursday still parked close to the heavily damaged vessel, with burned containers visible on the quayside. Residents of apartment towers and villas that line the city’s coast reported hearing a loud bang in the night and then felt windows and doors shaking after the fireball shot into the sky, with some filming the spectacle from their balconies. An AFP correspondent at the scene saw a helicopter circling overhead as columns of smoke rose from the tightly secured facility after the blast.

Dubai police said three of the 130 containers on the ship held flammable materials. “Initial reports indicate that… friction, or heat, may have led to the blast”, Dubai police chief Abdullah al-Marri told Al-Arabiya, adding that there were no radioactive substances or explosives present in the containers. Such events are a rarity in the ultra-secure Gulf emirate, one of seven which make up the wealthy United Arab Emirates.Jebel Ali port is capable of handling aircraft carriers and was the US Navy’s busiest port of call outside of the United States in 2017, according to the US Congressional Research Service. Global logistics giant DP World tweeted that “operations are running seamlessly” across the port, thanking the local authorities for “their swift response in resolving the fire incident”.

“I was outside on my balcony. My friend saw something yellow coming (like) the sun. I took the picture and after (there was) a sound,” said Clemence Lefaix, who was staying near the blast site and posted a photo of a bright orange light against the night sky in front of apartment buildings. “I was really scared.” A resident of Dubai’s Marina district, close to Jebel Ali port, told AFP that they “saw the windows shaking”. “I have been living here for 15 years and this is the first time I’ve seen and heard this.”

There are 8,000 companies based in the Jebel Ali Free Zone (JAFZA) which contributed 23 percent of Dubai’s gross domestic product last year. It is the Middle East’s largest trade zone. The glitzy Gulf emirate of Dubai transformed itself over the past 50 years from a sleepy port town to a regional travel, trade and financial services centre. The city state is now home to more than three million people, mostly foreigners, compared with only 15,000 inhabitants in the 1950s. Unlike Abu Dhabi, the leading member of the UAE that sits on large reserves of petroleum, Dubai has dwindling oil resources and has worked to develop non-oil industries, becoming a hub for services and tourism for the region.