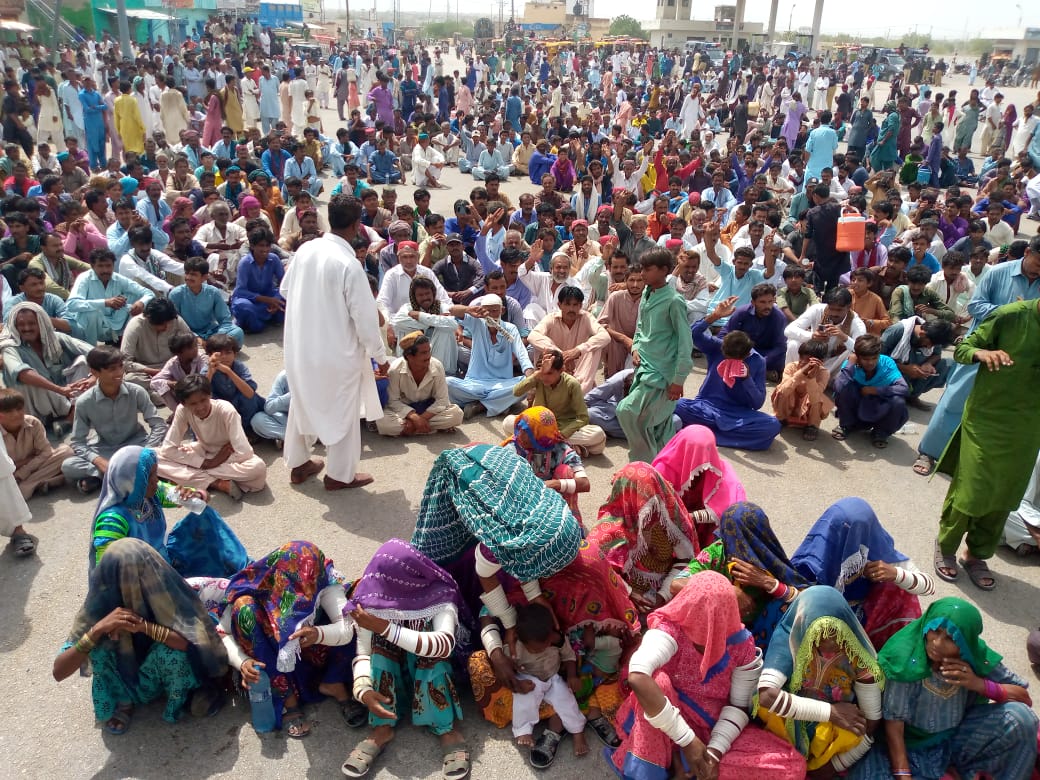 The members of the ministerial committee formed by Sindh Chief Minister, Syed Murad Ali Shah on the directions of PPP chairman Bhutto Zardari on Wednesday reached village Aban-Jo-Tar and condoled with the relatives of the murdered Dodo Bheel. Imtiaz Ahmed Sheikh, Syed Sardar Ali Shah, Nawab Taimour Talpur along with PPP lawmakers and party leaders while consoling with relatives of the victim said it was a very tragic incident and they were equally saddened over the gory incident and they expressed their grief and condemned the ghastly act by the security guards of the mining company.

The relatives talking to the ministers complained that their relative was brutally killed by the security guards but the area police despite their frequent fervent appeals to save his life when he was being tortured by security guards along with his other fellows did not take action. They also complained that police teams were making reckless arrests of the people of their community after the registration of the FIR against some known and dozenses of the unknown protesters adding they demanded to order SSP Thar stop arresting the people, who belonged to their community.

The ministers said that the PPP government and leadership would extend all possible assistance to the family members of the victim. The provincial minister said that the Sindh government had not only announced the compensation of Rs 10 million to the legal heirs of Dodo Bheel but also would give jobs to the close relatives of Dodo Bheel in the mining firms. Mr Sheikh said that those nominated in the FIR though got bail from Sindh High Court would soon be arrested adding he said that services of the accused had already been terminated. He said that Sindh had also announced the compensation for two other workers, who sustained injuries and were under treatment for the wounds.

The provincial ministers said that the Sidh government would also hire lawyers so that those nominated in the FIR could be punished accordingly. They said that they would not leave them alone in their efforts for getting justice for Dodo. The PPP minister on the demand of the family members of Dodo Bheel assured them that they would take up the issue of the registration of the FIR against the protesters with chief minister Sindh so that FIR could be quashed through the legal process.The provincial ministers, however, endorsed the police actions of the registration of the FIR against the protesters, since according to them, due to prolonged protest demonstration roads leading to the projects of CPEC were blocked and thus the movement of the miners from China were badly affected.

The members of the committee also visited Islamkot Press Club and speaking to the journalists said that it was also painful for them that during the protest demonstration by the relatives of the victim, some journalists were tortured and injured by cops.” Such incidents should be condemned and should not be allowed ” they added and sought their apologies from the media persons with no promise of the actions against those cops, who had subjected the media persons to brutal and snatched their mobile phone sets and cameras. When journalists demanded the removal of the SSP Hassan Sardar from Tharparkar district, the PPP ministers said that they had directed him as well to go to press clubs and listen to their grievances and maintain the professional relationship with them. They made it clear PPP is the party, which had always believed and fought for the freedom of expression and free media. Replying to a question by a journalist regarding the registration of the FIR against the eminent activist Bheemraj Meghwar, the ministers said that they would look into the matter why his name was also included in the FIR along with other protesters.

They said that they would submit the detailed report of the incident to chief minister Sindh for the corrective measures. Mr Sheikh and Mr Shah said that Thar coal projects were the gift of their slain leader Ms Benazir Bhutto and they would try their best to provide all maximum facilities to people, who had given great sacrifices. The ministers also visited Civil Hospital MIthi where they met with another injured Ghulam Qadir Khokhar and inquired about his health. The ministers informed that the Sindh government had already announced compensation of Rs 5 million and they directed the duty doctors to provide him the best healthcare facilities.

While the wife of murdered Dodo Bheel reportedly refused to meet with ministers and PPP leaders saying that she would not meet them as long as their brothers, who had firmly stood with them during their difficult times, who were languishing in the jails. She reportedly demanded the release of those arrested by Islamkot police including the chief Bheel intellectual Forum Advocate Lajpat Soorani and others.