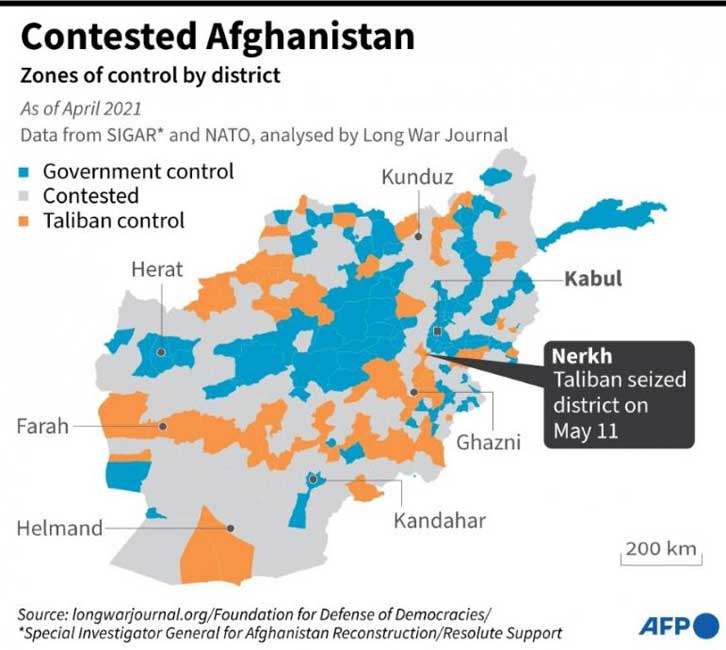 Afghan authorities on Tuesday vowed to retake all the districts lost to the Taliban as the pullout of US forces from the country neared completion.

Hundreds of commandos were deployed to counter the insurgents’ blistering offensive in the north, a day after more than 1,000 government troops fled into neighbouring Tajikistan.

The US Central Command announced that the American withdrawal from the country, ordered in April by President Joe Biden, was now more than 90 percent completed, underscoring that Afghan forces were increasingly on their own in the battle with the hardline Islamist Taliban.

Fighting has raged across several provinces, but the insurgents have primarily focused on a devastating campaign across the northern countryside, seizing dozens of districts in the past two months.

Last week, all US and NATO forces left Bagram Air Base near Kabul — the command centre for anti-Taliban operations — effectively wrapping up their exit after 20 years of military involvement that began in the wake of the September 11 attacks.

“There is war, there is pressure. Sometimes things are working our way. Sometimes they don’t, but we will continue to defend the Afghan people,” National Security Adviser Hamdullah Mohib told reporters.

“We have plans to retake the districts,” he added. Troops and pro-government militiamen were deployed in the northern provinces of Takhar and Badakhshan where the Taliban has captured large swathes of territory at lightning speed, often with little resistance.

Afghan defence officials have said they intend to focus on securing major cities, roads and border towns in the face of the Taliban onslaught, launched as US and NATO troops pressed ahead with their final withdrawal in early May.

The militants’ rapid gains have spurred fears that Afghan forces are facing a spiralling crisis, particularly now that vital US air support has been massively curtailed by the handover of Bagram Air Base.

Mohib acknowledged that the Afghan air force was stretched and largely unable to support bases that were in remote districts.

But he said the air force was now being reorganised and would offer the needed backup to troops on the ground.

“We had some glitches as a result of the (US) retrograde… (that put) additional pressure on the Afghan air force, he said.

“Next week we will receive seven Black Hawks” as part of Washington’s continued support of Afghan forces, he said.

President Ashraf Ghani blamed the Taliban for all the “bloodshed and destruction”, adding that his government will not “surrender” to the militants, a palace statement said.

On Monday, more than 1,000 Afghan troops fled into Tajikistan, forcing the neighbouring country to bolster the frontier with its own soldiers.

“We had to abandon our base because there was no coordination or interest among our commanders to counter the attack,” said Mohammad Musa, a soldier who had fled to Tajikistan after his base in Kunduz province fell to the Taliban last week.

The fighting in the north has also forced Moscow to close its consulate in the city of Mazar-i-Sharif, the capital of Balkh province and one of Afghanistan’s largest urban centres, near the border with Uzbekistan.

But Mohib said the soldiers who fled were returning and rejoining the security forces.

The speed and ease of the Taliban’s effective takeover of areas in Takhar, Badakhshan and Kunduz represent a massive psychological blow to the Afghan government.

The area once served as the stronghold for the anti-Taliban Northern Alliance during the gruesome civil war in the 1990s and was never routed by the militants.

A psychological war has also been taking shape online.

The Taliban has marshalled its forces on social media, with insurgent-affiliated accounts providing live updates of the fall of districts and posting numerous videos of Afghan soldiers surrendering and handing over weapons caches and equipment to the group.

The Afghan government in turn has been releasing its own footage on social media — mostly grainy black and white videos of air strikes obliterating alleged Taliban positions, while boasting of inflicting heavy casualties on the jihadist group.

Back on the ground, Afghan commander General Mirassadullah Kohistani, who is now in charge of Bagram Air Base following the US exit last week, put on a brave face when asked about the insurgents’ rapid advances.

“We are trying to do the best and as much as possible secure and serve all the people,” he said.