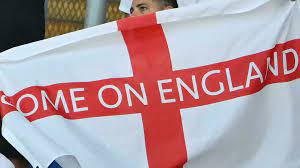 England is gripped by Euro 2020 fervour as Gareth Southgate’s men prepare to take on Denmark for a place in the final of a major tournament for the time in 55 years.

England will walk out to a wall of noise at Wembley on Wednesday with the bulk of a crowd of 60,000 willing them on, backed by millions of passionate supporters at home. Southgate’s side started the tournament slowly but have rapidly picked up momentum, beating old foes Germany in the last 16 and hammering Ukraine 4-0 in the quarter-final in Rome. Nearly 21 million people tuned into the Ukraine game, making it the most-watched live TV event of the year, but that record is likely to be obliterated against Denmark. Southgate’s men are back at home on Wednesday, and would play at Wembley again if they reach the final against either Spain or Italy, as the pan-European event turns into a “home” tournament for the Three Lions. Belief is growing in a nation weary of the coronavirus pandemic and hungry for success that Southgate’s young team can deliver glory for the first time since the 1966 World Cup.

Cars and homes are decked out with St George’s Cross flags and British Prime Minister Boris Johnson has reportedly given the green light for pubs to remain open later on Sunday to prepare for a potential England final. Johnson, who unveiled a huge England flag on Downing Street before the Ukraine game, tweeted: “We’re all behind you for the semi-finals, bring it home.” British astronaut Tim Peake praised the team for their performance in the quarter-finals, saying: “Bring on the semi-finals!” One man has covered his house with 64 England flags, with donations going to charity. “We are on a main road and there are a lot of buses and work people going past and the response has been brilliant,” Lee Johnson told the BBC. “We get a lot of people beeping and screaming ‘come on the boys’.”

Defender Harry Maguire said the players were aware of the mounting excitement around the country as they seek to reach a first European Championship final in England’s history. “We see all the positive vibes and the videos going around. It’s a great atmosphere to be involved in and winning football matches enables that,” he said. “We’re on this journey together. Us, players, staff, fans, we’re all in this together. We all want the same thing, we all want to win football matches and go as far as we can.” Maguire admitted that home advantage would benefit England in the last four, with bigger crowds allowed back into Wembley as coronavirus limits are eased despite a surge in infections.

The Manchester United player said the atmosphere in the Germany game was one of the best he had experienced, with Neil Diamond’s “Sweet Caroline” belted out by 40,000 delirious fans. “We’ve got even more fans in the stadium for the semi-final,” he said. “It’s going to be electric, it’s going to be a great atmosphere. “We’re on this journey together as players, staff and fans, and they’re right behind us. We’re really feeling their support and their love and it’s really pushing us, spurring us on to do great things.”

Former England captain Alan Shearer, who reached the semi-finals at Euro 96 on home soil, urged the current generation of players to drink in the atmosphere. “You can’t escape the atmosphere, but then you don’t really want to — it’s an incredible feeling, knowing the whole nation is supporting you on a stage as big as this,” he wrote in his BBC column. “The team are back on home soil now for the rest of the tournament and there is going to be one heck of a din when they walk out at Wembley.”