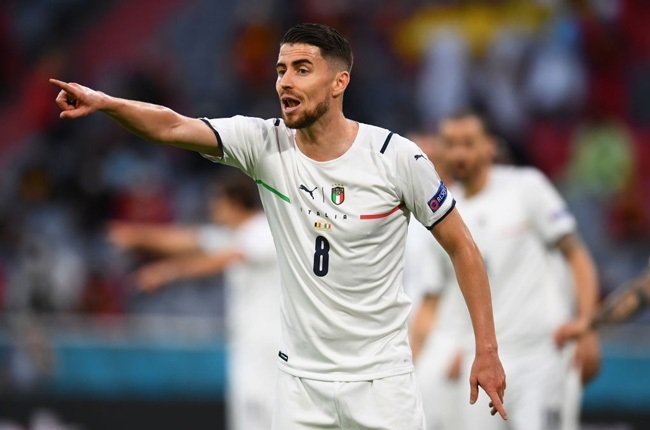 A discreet but ‘irreplaceable’ midfield presence Jorginho has been the cornerstone of Italy’s revival from World Cup flops to Euro 2020 contenders with a semi-final against Spain awaiting in the London of his club side Chelsea on Tuesday.

One of the Azzurri’s Brazilian contingent along with domestic teammate Emerson Palmieri and Atalanta defender Rafael Toloi, Jorginho, born in the southern town of Imbituba, has brought the technical flair of the country of his birth to his adopted Italy. “With Jorginho, everything seems simple. He is essential to this team, untouchable,” said midfield partner Marco Verratti. “Jorginho and Verratti are two phenomena and make the team turn,” continued Inter Milan midfielder Nicolo Barella, who scored the opener in a 2-1 win over favourites Belgium which fired Italy into the final four. “This midfield, together with that of (Serie A champions) Inter Milan, is among the strongest I’ve ever played in. Between us we create rivalries that push each other to do better and win,” Barella added.

Against the three-time European champions it will be another battle as Italy look to push their unbeaten run to 33 consecutive matches and move within one step of a title they last won in 1968. “With Spain it will be a difficult game, we are two similar teams who both want to play the ball,” continued Barella. Left-back Leonardo Spinazzola, another of the motors behind Italy’s Euro 2020 run, will be out after rupturing his Achilles tendon against the Red Devils. Santos-native Emerson, another Champions League winner with the Blues, will likely step into that role this week. Jorginho qualifies for the Azzurri thanks to his grandfather who hails from the northern region of Vicenza. “I feel that I’ve got the Brazilian technique with the ball, but the Italian mentality to always train hard and win,” said Jorginho.

As at Stamford Bridge, where his partnership with France’s N’Golo Kante inspired the English club to Champions League victory over Manchester City, the 29-year-old is the precious shadow worker for the Azzurri. Nicknamed the “Professor”, or “Radio Jorginho” because of his vocal instructions on the pitch, he is one of the only two outfield players to have played all five matches at the Euro, with defender Leonardo Bonucci. “He has a strong personality, in a team he is really the commander,” former Hellas Verona sporting director Mauro Gibellini, who spotted him as a child in Brazil, told AFP. Gibellini had created a football school in the South American country. He did not hesitate when he saw this 12-year-old boy, whose first coach was his mother, a former footballer, during a tournament in Jorginho’s hometown. After a few years in this school in Brazil, Jorginho arrived in Europe and Hellas Verona where he played in Serie B then in Serie A.

He then joined Napoli for four years from 2014 where he flourished under Maurizio Sarri whom he followed to Chelsea. “Jorginho has never changed, as a child he played the way he plays today,” continued Gibellini. “He has a great quality, before the ball arrives, he already knows where to steer the game. He has no need to touch the ball more than once or twice. “He plays with his head held high. He dictates the tempo including in defence, when you have to do the pressing and get the team up. “Even if he is not powerful and not very fast, he compensates with his intelligence.”

Since 2018, Jorginho has been at Chelsea, winning the Europa League in 2019 along with Sarri, before Champions League success last campaign with Thomas Tuchel. “I would like to feel those same emotions with the national team,” said the 33-times capped player. “This group resembles Chelsea, it’s wonderful, they are so hungry and want to prove something, from the youngest to the most experienced. “This is also my first major competition with Italy and I really want to do well.”