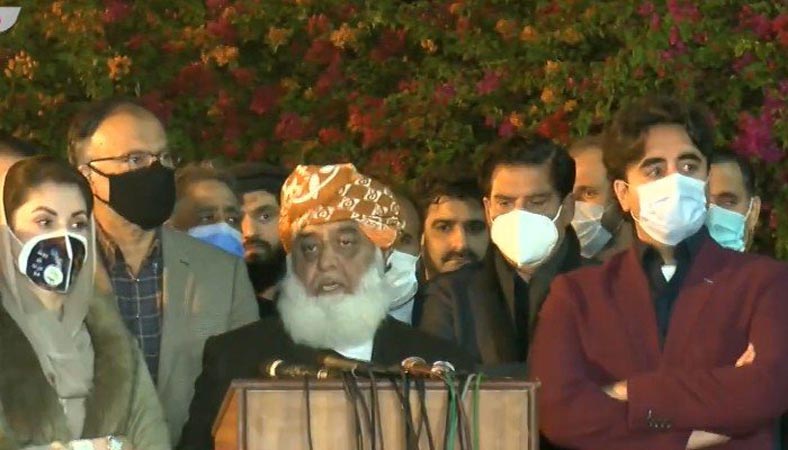 Other PDM leaders will also take part and address the rally in Swat today. Former Punjab chief minister Sharif, as per reports, has arrived in Swat ahead of the jalsa.

Security arrangements will be looked after by the KP Police and an estimated 2,000 JUI-F volunteers who will be in attendance at the jalsa.

PML-N Spokesperson Marriyum Aurangzeb said a PML-N delegation, under the leadership of the former Punjab chief minister, will take part in the jalsa.

She said all arrangements for the power show have been completed.

“Shahbaz Sharif will arrive from Balakot, leading a rally of PML-N workers, to Swat,” she said.

Aurangzeb had said the PML-N leader will lead the rally at 2 pm from Balakot.

Information Minister Fawad Chaudhry lashed out at the PDM leadership, saying that the Opposition alliance was staging another drama in Swat today after the failure of the Abu Bachao Movement.

Chaudhry has used the above-mentioned slogan to describe, what he calls, the Opposition parties’ (PPP, PML-N) efforts to seek relief for ex-president Asif Ali Zardari and former prime minister Nawaz Sharif, from accountability.

The minister said that the “characters in this drama” have split already, adding that neither do the parties in the PDM share an ideology nor are they on a shared path or moving towards a common destination.

“Criticising Imran Khan is not sufficient alone. Show the public the programme you have for them,” he added.

Disagreements within PDM come out in the open as PPP, ANP split from alliance

In April, the PDM suffered a jolt as PPP Chairperson Bilawal Bhutto Zardari that the party’s Central Executive Committee (CEC) had called upon its members to resign from all positions of the PDM.

Flanked by party leaders, Bilawal held a news conference to speak about the matters that came under discussion during the PPP’s CEC.

He said the CEC had come to the conclusion that resignations from the national and provincial assemblies should be “like an atom bomb”.

Bilawal said the PPP’s stance that the Opposition should not “abandon the Parliament and the Senate battleground” had been vindicated.

He said if the PPP had listened to other political parties in the Opposition and boycotted the Senate elections and by-elections, then it would have harmed democracy.

“We did not give the PTI government an open field to form a two-thirds majority in the Senate,” he said, adding that the government lost on its “own pitch” when the PDM candidate won from the Nowshera by-election.

He said those who wanted to resign from the Parliament, should do so.

“But, no one should try to impose their will or their dictation on any other political party,” he said. “And the Pakistan Peoples Party will continue in its firm, consistent Opposition to the selected government that has been ongoing since day one and has not broken for a single day,” stressed the PPP chairperson.

Bhutto was responding to the show-cause notices issued by the PDM to the PPP and the ANP.

“The Pakistan Peoples Party rejects the so-called show-cause notice,” he had said. “Politics is done with equality and respect,” he added.

“The PPP demands an unconditional apology to the ANP and to the PPP for this obnoxious attitude,” he had said.