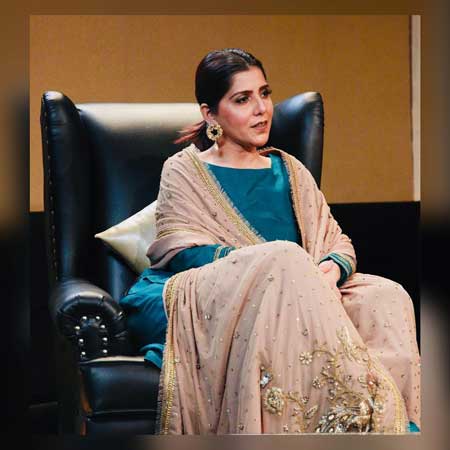 Noted drama writer, poet, producer and social activist Asma Nabeel succumbed to breast cancer during treatment at a private hospital in Karachi late on Thursday at the age of 43.

Asma wrote hit plays like ‘Khuda Mera Bhi Hai’ and ‘Kahani’ that became popular across the country. Before entering Pakistan’s entertainment industry, she worked as a creative director with different national and multinational advertising companies.

Her plays depicted social issues and the problems faced by women in their daily lives. Her drama series ‘Surkh Chandni’ also touched on the social topic of acid attacks. The story revolved around an acid attack victim played by Sohai Ali Abro however Asma’s drama serial ‘Baandi’ highlighted the topic of ill-treatment of maids in Pakistan.

She was also an exuberant poetess who infused courage through poetry among the young generation. She translated an English poetry book of renowned poet Zafar Beo that was published in 2018

She was also an exuberant poet who infused courage through poetry among the young generation. She translated an English poetry book of renowned poet Zafar Beo that was published in 2018.

After the news of her death broke eminent showbiz personalities including Aijaz Aslam, Chaudhary Wasay, Adnan Siddiqui, Nayyar Aijaz and others expressed their condolences via Twitter and termed it a huge loss to the entertainment industry of the country.

After being afflicted with the deadly breast cancer she started creating awareness against the fatal disease through different social forums. A short film Fly written by her evolved around a cancer patient who defeats the disease but unfortunately, the writer herself could not do that.

The late celebrity was bestowed with the title of Ponds miracle woman in 2015.

The article has been written and contributed by Kamran Khamiso Khawaja who is a law student and columnist. He can be reached at kamran.khowaja338@gmail.com and Tweets at @ZaibSha1