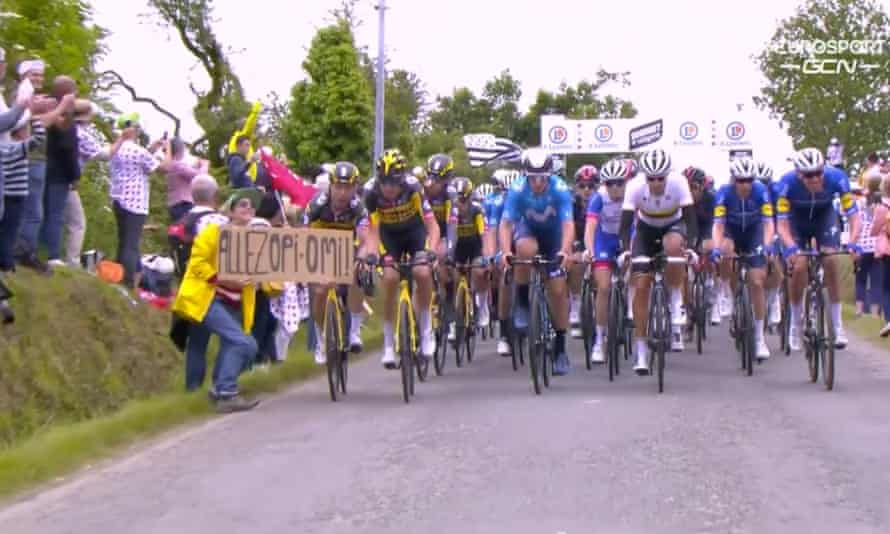 The Tour de France has withdrawn its legal complaint against the spectator who caused a spectacular mass pileup on the opening day of the race, its director Christian Prudhomme told AFP on Thursday.

The woman was arrested Wednesday at a police station in Landerneau in Brittany, where stage one finished on Saturday, and is still in custody. “The incident has been blown out of all proportion,” Prudhomme said. “So we’d like to calm things down now that the message has got across that the roadside fans need to be careful.” The accident happened between Brest and Landerneau when the woman, facing away from the riders and towards the cameras, held up a cardboard sign which read “Allez Opi-Omi”, which translates as “Go, grandpa and granny”.

German cyclist Tony Martin, positioned on the edge of a group of tightly packed riders, hit the sign and fell, bringing down dozens of others who were following behind him. The pileup delayed the stage for five minutes while bikes and bodies were untangled. Amid the chaos, the woman was seen reeling away in horror before disappearing into the roadside crowd, her sign folded away beneath her arm. After Saturday’s crash, the deputy director of the Tour, Pierre-Yves Thouault, had told AFP that the organisers intended to sue the culprit.