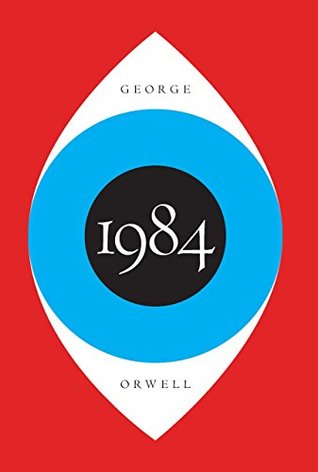 1984 is a dystopian fiction by George Orwell. What George Orwell does in this novel I cannot even describe to you. It is an absolute masterpiece and I thoroughly enjoyed reading it. I believe that this has been the greatest book that I have ever read thus far, and I think absolutely nothing can compare to it.

Let me start with the plot. The first character that we are introduced to is a man named Winston. Winston is a middle class and middle aged man living in a dystopian society.

In this dystopian society, you have a set of rules to follow. You cannot engage in a marriage ceremony, you cannot say bad things about the party, you have to pledge your allegiance to the party and essentially, the only thing you do all day is eat, sleep, work and repeat. There are telescreens everywhere that watch each and every move that you make. They monitor you 24/7, they can see how you move, how you behave and everything else in between. Based on that, they decide whether or not to arrest you and sentence you to death. There are also organizations such as the thought police, which monitor your every move externally. There are a set of thoughts that you have to stick to. If you cross those barriers, the thought police will catch you and you will be sentenced to death. If you think that the party is mismanaging the country, boom, sentenced to death. There are even things called two minutes hate where you go on and praise the current party and denounce all opposition. The party even decides the propaganda that they will give to the people, and anytime that something changes, Winston and other workers have to change everything. They have to change all and any news to do with the past and replace it with the present and the ideas of the party.

Who is the leader of this party? Well, it is a mysterious figure named “ Big Brother”. Another requirement of living in this society is that you have to be loyal to Big Brother and do what he tells you to do and be satisfied with what he has achieved as a leader. No matter what, Big Brother will always be watching you. The place that Winston is residing in is called Oceania. In this world that Orwell has created, there are three places. One is Oceania, the other Eurasia and the last one Eastasia. Two of these places are allies, and they are always at War with one another.

Anyways, the novel opens with Winston feeling frustrated. Feeling frustrated by all the oppression and the control of the party over the people. He really dislikes the party with all of his heart, and unfortunately, he has to pretend not to like it for the sake of not dying. What he does do though is go to a shop, and in that shop he finds Mr. Charrington. Mr. Charrington is a member of the lower class part of Eurasia and is a very important character for the future. In that shop, he buys a diary. In that diary, he documents all of his thoughts. He recalls his memory often. The party claims that they are at war with Eurasia, but Winston knows otherwise, he recalls a time when it was opposite, he even thinks that Emmaunal Goldstein, the leader of the brotherhood, (which is a rumored group which allies together against the party) is a good person, when in the society it was preached that he was a bad person. Winston, in a way, has the exact opposite views as the party and members of the society.

Winston goes on to meet Julia, a woman who he at first thought was a spy, but later came to know that she was a woman whom he loved. Together, Julia and Winston have many adventures, but as expected, they are eventually caught.

After that, Winston is taken to Room 101, a place where you are subjected to your worst fears. There, he is tortured day by day, to the point where he cannot bear it. There even came a time where they would perform a surgery on his brain that would alter his ideas and form new ones that were entirely in favour of the party. Inevitably, after being subjected to tourture and worst fears, he changes his ideas and this time, he sides with the party.

The scariest part about 1984 is that George Orwell, the author of this masterpiece, almost accurately predicts today’s society. Although it may not be exact, it does somewhat accurately depict some societies. For example, in 1984, you cannot speak up against the government and you cannot express your opinion, and yet this happens in some societies and some governments. Propaganda is at its highest peak because of new technology that allows you to do anything. You can spread false information in today’s world, and people will believe it, because many people are still very uneducated. In some parts of the world, some media outlets are still government controlled, meaning that the government has all of the power, and they get to control what the people are seeing, just like in 1984.

1984 teaches us what it’s like to live in a totalitarian society. By creating a totalitarian society, Orwell sends a firm message. 1984 highlights the importance of resisting oppression and tyranny. It shows us that if we do not, then the events of 1984 can entirely come true. In a way, instead of just a book, 1984 is more like a warning. A warning for all of us humans to be careful and not let 1984, a fiction, become a reality.

Overall, 1984 blew my mind and changed my perspective of the world. If you want to do the same, 1984 would be a great read for you.