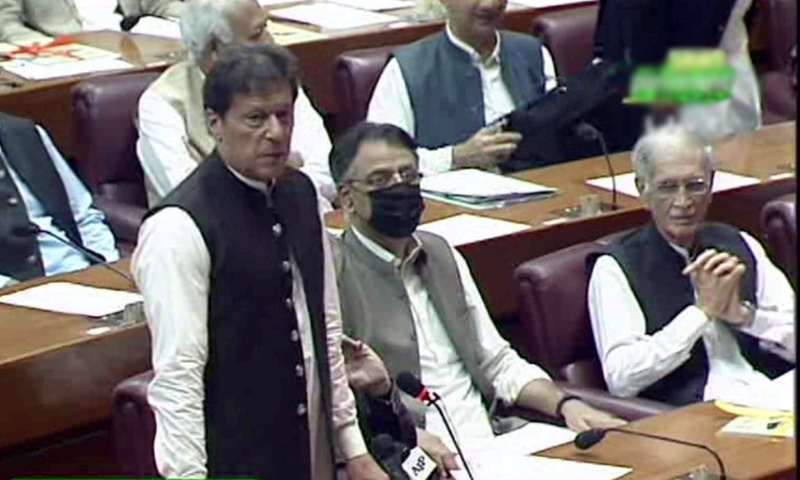 ISLAMABAD: Prime Minister Imran Khan is speaking at the budget session of the National Assembly a day after the government smoothly passed Finance Bill 2021-22.

Invitation to Opposition for electoral reforms

In his opening remarks, the premier stressed on electoral reforms to make the process transparent. He invited the Opposition to sit with the government to work on election reforms as they will benefit the democracy.

He said the government had been considering ways to make the elections acceptable to all the parties. The government has reached the conclusion that use of electronic voting machines (EVMs) could ensure transparency, he added.

“We did the same in 2013. We had asked the then government to hold recounting in four constituencies, and in all four, rigging was proved.”

“After trying our best […] we came to the conclusion that EVMs (electronic voting machines) are the only solution.”

“After 1970, all elections have been controversial,” he said.

The premier said the recently held by-polls and Senate elections were made controversial as well.

The premier said his government was “ready to listen” if the opposition had any other “advice” regarding the reforms, warning that if they were not passed, rigging could happen in future Senate elections and by-polls.

“The time has come to make the country’s elections acceptable to everyone,” he said, adding that in the US, when former president Trump had cast aspersions on the elections, their media and people demanded proof.

The premier said the government’s survival in its initial days was tough, as they had a huge current account deficit to deal with. “The initial days of our government were very troubling [….] it was very painful when we had to take tough decisions that had and continue to have consequences for the people.”

Giving the example of Turkey, he said when Recep Tayyip Erdogan had come into power, even his government took loans from the International Monetary Fund and had to face a tough time for three years.

Had we defaulted, he said, the investors would have pulled out their money from the country’s capital market. “We tried not to approach IMF, but eventually, we had to. Following that, the coronavirus emerged and battered an already struggling economy.”

On the occasion, the premier lauded National Command and Operations chief Asad Umar, Special Assistant to Prime Minister on Health Dr Faisal Sultan, the Pakistan Army, and others involved in curbing the spread of coronavirus.

PM Imran Khan said Pakistan’s coronavirus situation was better as compared to countries in the region — and it was “due to Allah’s blessings and the poor people’s prayers”.

The premier said inflation and unemployment spiked in countries where lockdowns were imposed, however, “we did not shut down everything and thus saved the people from such ordeals”.

Partnership with USA in peace, not in war

Imran Khan stated that the US was defeated in Afghanistan and they tried to shift the blame of their defeat on us.

The prime minister said the Afghanis were the brothers of Pakistanis, and that Islamabad knew them better than Washington. “We have decided to not comprise on the country’s sovereignty.”

PM Imran Khan said the US was trying to force Pakistan to bring the Afghan Taliban to the negotiating table, but we “do not wish for strategic depth in Afghanistan and we will respect the decision of the Afghanis.”

Speaking about another challenge, the prime minister said locusts were attacking agricultural fields and the government’s machinery worked even on Eid days to get rid of them.

“We protected the crops, and as a result, there was record growth of wheat, rice, and corn,” the prime minister said, adding that the sugar mills made timely payments to the farmers, which helped them invest back into their fields.

“Unfortunately, we have not paid attention to the agricultural sector in the last few years,” he said.

“We also gave incentives to the export industry, and they grew by 17%,” he added.

The premier said the government tried to help the farmers be fully compensated. “When the farmers had money to invest, the wheels of economic growth began to turn and we saw a rise in growth rate.”

The premier said Pakistan’s exports hit a record $2.7 billion in June, and the country’s GDP reached 4% as the government took important steps to revive the economy after coronavirus battered it.

Lauding Minister for Finance Shaukat Tarin and his team, the prime minister said they had presented the budget in line with his vision. “When we had begun our struggle 22 years back, we had one aim in mind: to build an Islamic welfare state — the objective of our founding fathers.”

The premier said if the country steps back from this aim, then there would be “no justification for Pakistan’s existence”.

PM Imran Khan said that the budget reflected the PTI’s three core principles — justice, humanity, and self-sufficiency — and lauded his financial team for ensuring the budget embodies all three.

After severely criticising the government over the provisions of budget 2021-22 and condemning the legislative process conducted on Tuesday, the PPP chairperson left the House and later returned upon which a war of words erupted between the two leaders when Bhutto took a dig at the foreign minister.

“I would like to request the prime minister to order the ISI to tape Shah Mahmood Qureshi’s phone,” taunted Bhutto. “When he used to be our foreign minister, he ran a campaign around the world to make him the prime minister, instead of Yousaf Raza Gillani,” he added.

“That is why we sacked him from the post of foreign minister,” added the PPP leader.

The foreign minister responded to the PPP leader’s accusations, telling him that he also knew Bhutto “since he was a little kid”.