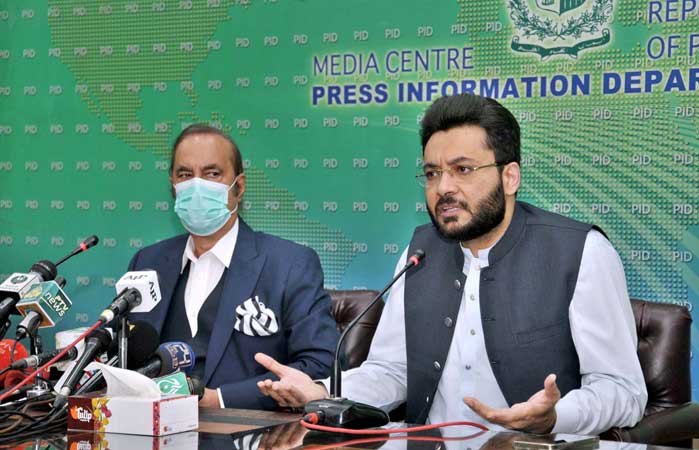 Minister of State for Information and Broadcasting Farrukh Habib said on Monday that Pakistan Muslim League-Nawaz (PML-N) President Shehbaz Sharif had lost moral high ground to continue as opposition leader in the National Assembly (NA) after his failure to bring his absconding brother (Nawaz) back from London.

Shehbaz Sharif, who submitted a stamp paper in the court to guarantee his brother’s return, should not bother the members with his hours-long lectures on rule of law in the NA as the court had dismissed Nawaz Sharif’s appeals for being fugitive of justice in the Avenfield and Al-Azizia references, he said in a news conference along with Adviser to the PM on Parliamentary Affairs Dr Babar Awan here.

He said the statement of the opposition leader’s niece (Maryam Safdar), who said that her father would come home from London if he is not sent to jail on return, had fully exposed the duplicity and treachery of the Sharif family.

“There is a big difference between words and deeds of the entire Sharif family as on the one side, the uncle (Shehbaz) gave a guarantee for the return of his brother, while on the other side, now his niece is seeking the NRO (National Reconciliation Ordinance) to help her father escape the jail [on his return to the country],” he said, adding the way Nawaz was spending his life in London, it seemed that he had fully recovered.

The minister asked the PML-N to accept and implement the decision of the court which had dismissed Nawaz Sharif’s appeals and restored his conviction in the Avenfield and Al-Azizia references.

He reminded the PMLN that this was the same court that allowed Nawaz to go abroad on medical grounds for eight weeks and suspended his conviction in the case.

“The entire nation knows that Nawaz Sharif was convicted after his free and fair trial, but in return what came to the fore were ‘Qatari letter’ and a ‘fake trust deed’,” he said, regretting that the Sharif family, actually, even did not have any kind of record for the ‘Palaces’ where Nawaz Sharif was currently living in London.

Farrukh said he wanted to tell Nawaz Sharif that by sitting in London, he could only become ‘Altaf Hussain’ who did not obey the law and respect institutions. “You cannot become Nelson Mandela by doing politics from London,” he added.

“It is upto you now that whether you become Altaf Hussain 2 or come back to the country and return the looted money to the public,” he maintained.

This showed that the struggle of the Sharif family was only aimed at saving their looted money and it appeared that they would go to any extent for the purpose, he added.

“They (Sharif family) have nothing to do with the public welfare, electoral reforms, free and fair elections in the country,” he said, adding they just desired to get back their rule which was based on the pattern of ‘Mughal dynasty’.

Farrukh said Prime Minister Imran Khan would not let them do any such thing at any cost, adding he was the only leader in Pakistan’s history who brought his hard-earned money to the country through banking channels and then later declared by the apex court as the righteous and honest person on submitting money trail of his assets.