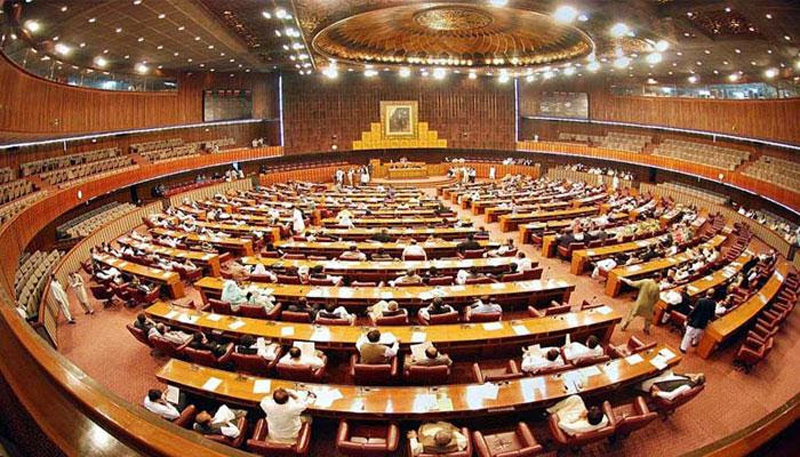 The National Assembly on Monday approved nine demands for grants worth Rs.157.331 billion and rejected 535 cut motions moved by the opposition parties to reduce development expenditures for various projects and schemes.

Parliamentary Secretary for Finance Makhdoom Zain Hussain Qureshi moved demands for grants one-by-one in the House and the Chair allowed maximum lawmakers from the opposition benches to argue in favor of their cut motions.

The House approved three demands for grants of the Information and Broadcasting Division worth Rs. 10.074 billion and rejected 107 cut motions on them. Minister for Information and Broadcasting Chaudhry Fawad Hussain concluded debate on demands for grants related to his Ministry and said that several innovative steps were being taken to improve performance of the state media organizations to represent the national narrative at international level.

“Today’s world was a world of public opinion, now wars were fought through rhetoric, the more the narrative was accepted, the more victory would be determined. With the use of advanced technology and strengthening the state media with more allocations, we can effectively fight the media war against enemies of Pakistan,” the minister said.

He thanked the Ministry of Finance for allocating enough funds to enable state media to meet with the international standard. He said a plan of refinements was being introduced in the Ministry of Information and Broadcasting and its departments to face contemporary challenges.

The House approved two demands for grants of National Food Security and Research Division worth Rs. 25.135 billion and rejected 142 cut motions on them.

Federal Minister for National Food Security and Research, Syed Fakhar Imam said the government has planned to spend Rs 53.5 billion in this year 2021-22 on agricultural development and reforms to enhance the agriculture growth in the country. The government has earmarked Rs 12 billion for the agriculture sector in the budget 2021-22, apart from this, negotiations are underway with the Ministry of Finance for additional Rs 25 billion and Rs 16.5
billion for development in various areas of this potential sector.

The Minster said that in order to increase research development in the agricultural sector, “We need to pay more attention to agricultural universities for modernizing the agriculture curriculum in the country”.

Likewise, the House also rejected 175 cut motions on demands for grants of National Health Services, Regulations and Coordination Division and approved them having worth of Rs.49.797 billion. Winding up debate on the Cut Motions, Parliamentary Secretary for National Health Services Dr Nousheen Hamid said the Pakistan Tehreek-e-Insaf (PTI) led government was paying full attention to the health sector adding that health reforms was top agenda of the government.
She said health Insaf Cards were given to all people in Khyber Pakhtunkhwa, Gilgit-Baltistan and Azad Kashmir. Being a flagship programme of the government, health cards were also being provided to the people of Islamabad and Punjab, she added.

The Sindh province did not provide health cards to the people so far, she said. Regarding COVID-19 pandemic, she said the whole world including the World Health Organization acknowledged Pakistan’s policy to contain the pandemic.

She said Bill Gates has also appreciated Pakistan’s efforts for containing the pandemic and steps taken for strengthening the economy.

She said the federal government provided vaccines to the Sindh government and the provincial government did not purchase a single dose so far.

She said the government had already purchased vaccines worth Rs 192 billion so far. An amount of $ 1.1 billion was allocated in the budget for purchase of vaccine, she added.

The Parliamentary Secretary said the government has prepared a project for stunting growth and mother child care with coordination of the province. She said the number of lady health workers would also be increased.

The House also passed two demands for grants of Railways Division worth Rs. 72,325,590,000 and rejected 111 cut motions on them. Concluding debate on these demands for grants, Minister of State for Parliamentary Affairs Ali Muhammad Khan said that Pakistan Railway earned record revenue of Rs.54 billion during 2019 and the entire credit goes to the incumbent government of PTI. He said that performance of Pakistan Railways would be further improved as its total cost per annum is Rs.97 billion of which Rs.14 billion incurs on making railway trains operational.