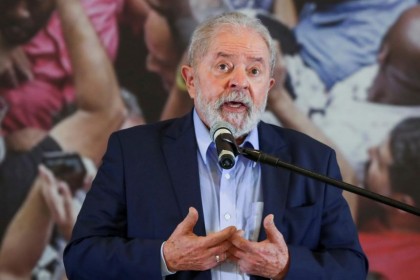 A magistrate on Brazil’s Supreme Court on Thursday annulled two more cases against former president Luiz Inacio Lula da Silva that had been brought by former judge Sergio Moro, who had previously been deemed by the same court to have been “biased” in convicting and jailing the iconic leftist leader.

The latest ruling invalidates all the evidence collected by Moro, meaning the trial process will have to start again from scratch. That diminishes the chances of a relatively quick verdict being delivered that would block the 75-year-old Lula, as he is popularly known, from running for president in 2022. Socialist Lula claimed his conviction was politically motivated in a bid to prevent him from running against President Jair Bolsonaro in the 2018 election that brought the far-right politician to power. Supreme Court magistrate Gilmar Mendes said there were “factual and legal” links between the case in which Moro was declared “biased” and the other two cases that passed through the judge’s court in the southern city of Curitiba during his massive anti-corruption campaign known as “Operation Car Wash.” Therefore, Mendes ordered an annulment of “all the decision-making actions” taken by Moro, including those that “preceded the procedure.”

In 2017, Moro convicted Lula of accepting a luxury apartment in Sao Paulo as a bribe and sentenced him to more than nine years in jail. An appeals court upheld his conviction, preventing him from running for president again as he spent 19 months in jail. But the second chamber of the Supreme Court, which is made up of five judges, in March accepted the argument by Lula’s defense that Moro’s political bias was evident when he was appointed justice minister by Bolsonaro. The Supreme Court itself later ratified that ruling by a vote of seven to four.

Mendes’ decision extends that ruling to the other two cases Moro brought against the former president in Curitiba. One case is related to the refurbishment of a farm in Sao Paulo state and the other to the purchase of land for the Lula Institute. The former president, who was in office from 2003-2010, has always professed his innocence, but still faces three other trials, one in Brasilia and two in Sao Paulo.