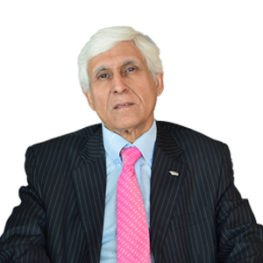 The goals of macroeconomic policies of any country including Pakistan are:

1. To ensure low unemployment (at Natural Rate of Unemployment) in the country

3. To ensure Economic Growth (increase in national Income = GDP) in the country

4. To attract favorable investment levels (FDI and local investments) in the economy

6. To ensure Stable Exchange rates of the local currency against foreign currency

Fiscal Policy is one of the main policy instruments with the government that can ensure the above-mentioned goals, provided the fiscal policy is economic oriented and not only revenue-oriented. The other policy is the monetary policy of the State Bank that should balance out any disruptions in the economy, especially inflationary trends that can be generated through employment generations and enhanced income levels that can be initiated by the fiscal policy.

Finance Minister Shaukat Tareen on May 3, 2021, gave a policy statement on the economy and the IMF conditionality, stating that, “IMF did injustice to Pakistan by asking the government of Pakistan to increase its electricity tariff, in order to reduce the circular debt, because this price hike is increasing inflation, had stopped the economy from moving forward and has increased corruption”. In his view “if the country does not have GDP growth of 5% then there would be a crisis for the next four years”. He warned that “Bold decisions should be taken in this budget, and instead of increasing taxes, tax net should be widened”. The finance minister also stressed that, “Improved short-run, medium run, and long-run policies are needed for agriculture, industry, the housing sector, and price control”. He was of the view that, “very little amount was spent on education and health in the country”, adding that if the housing sector is revived, 20 other industries will revive” He also emphasized that, “the government should privatized all public sector institutions that are not unable to run”. 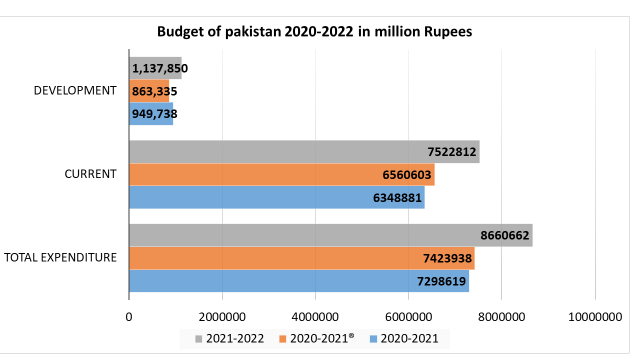 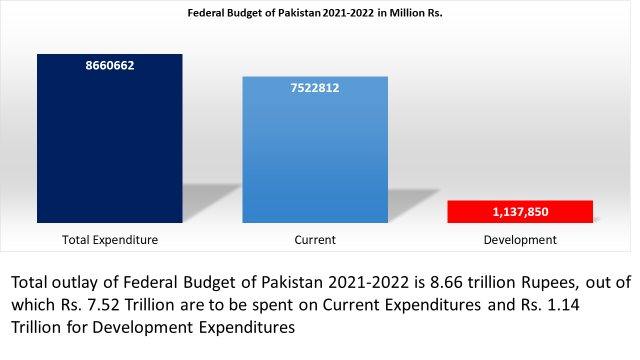 From the above Fig, it can be seen that 86.6 % if the 2021-2022 Federal Budget of Pakistan is for current expenditures and only 13.2% for Development expenditures. 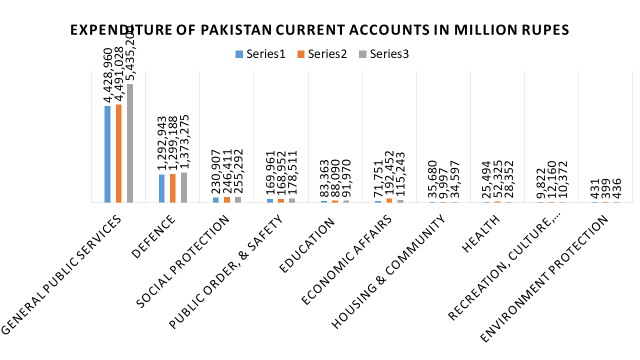 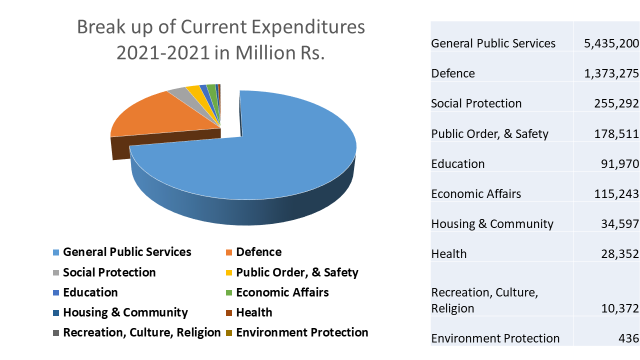 Out of the current expenditures, the major portion of 72.34% will be spent upon General Public services that include debt repayments, pensions, salaries and perks among other things. 18.2% on Defense, 3.5% on social protection, 2.4% on Public Order & safety, 1.6% on Economic Affairs, 1.2% on Education, 0.5%on Housing, 0.5% on Health, 0.1% on Recreation, Culture & Religion and on last priority only 436 million for pollution control

In my opinion, the Government has given an Rs. 3 trillion deficit Budget that will be financed mainly through indirect taxes, Rs. 0.5 trillion as surplus from provinces, trying to increase the taxpayers for direct taxes, but mainly through bank borrowing and deficit financing

Essential living costs of food, wheat, and sugar for the poor and lower middle class will decrease due to government interventions and subsidies.

No, the government enforcement, price, and quality control mechanism are outdated, weak, and rigged with corrupt officials, therefore there will be no or very little impact on the prices and the economy this year

The PTI has set its growth rate target to 4.8%. However, there are concerns by the opposition that even after achieving this the government would have merely returned the economy to the position it was before the current government took over. According to you, how factual is this?

Ans. 4.8% GDP growth rate is achievable with allowing black money to be invested or parked in the construction sector and tax plus tariff cuts for the industry that would better the income level of the upper 25 to 30 million people part of the capitalist economy, but the overall lifestyle of the rest of 200 million will not change even minutely as the mechanism of trickle-down effect are still not in place and the government is relying on the 19th-century institutions and laws to bring the economy in line with the 21st century needs. The system will not deliver up to the wishes of PTI or any other government in the near future.

The new budget is based on good intentions by the government to ensure that the budget is ‘people friendly’ in its essence. This has left some economists optimistic over the implications of the budget. However, others have raised concern over the government’s ability to apply and continue the new policy especially in light of the fact that major changes in direction still need to be discussed with the IMF. What are your thoughts on this?

Ans. IMF has put a straight jacket on the Pakistan Economy and we still remain a semi manufacture goods exporter and import oil, edible oil, tea, pulses, machines, raw materials, and even know-how. Only the Remittances are saving us from more foreign debt.

We need to diversify and link our SMEs with international markets and produce new value-added products for exports and also increase the productivity of land and labor, especially youth, and create e-entrepreneurs very quickly. Also, we need to change the behavior of our institutes and laws to match new economic conditions.

We need to educate our children into 21st century skills, know-how, and international work habits.

This is a tall order and I hope the PTI government is in alignment with the provinces can understand the need of the hour in deliverance rather than words of politics.

It is important to note that, all the above goals of macroeconomic policies have not been fulfilled to date, especially for the poorer section of the society.

3. To ensure Economic Growth (increase in national Income = GDP) in the country where according to the Economic Survey of Pakistan the perspective growth rate is 3.95 in June 2021 and where Pakistan PPP -Gini ($ per Capita) was $5,840 against the world average of $18400 and the country Ranked 132nd among the world Economies in PPP and 154th in GDP per capita indicator.

4. To Attracting favorable investment levels (FDI and local investments) in the economy, where the foreign direct investments have reduced by near 40% in 2021.

5. To ensure External Balance (Stability in BOP) Balance of Payments Current Accounts. This has been achieved in 2020-2021 thanks to an inflow of remittances from the Pakistanis living abroad as well as the increase in exports and decrease in imports.

6. To ensure Stable Exchange rates of the local currency against a foreign currency where the rupee-dollar relationship is volatile and has relatively stabilized at Rs. 155 to one US dollar (the lowest among SAARC countries.

It is recommended that for Pakistan when the government is too large and inefficient and there are many unmet social and infrastructural needs than it is recommended (for Pakistan), that Government spending’s (G) be increased in Development Expenditures in order to generate primary employment; Reduce government spending in Current expenditures to reduce government reliance on new taxes. Also, Tax (T) cuts in indirect taxes to reduce the cost of doing business and to reduce inflationary pressures on the poor, and Tax increase indirect taxes to induce government revenue or an increase in the Budget deficit.