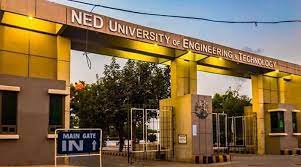 NED university is all set to have astro turf for its hockey ground and floodlights for its cricket stadium, where first class matches will be held.

This will be a great addition to an already wide variety of sports facilities which included: A track for athletes, a synthetic football turf, an indoor gymnasium and a tennis court. Due to the pandemic, these projects were not officially inaugurated, but competitions are still held there.

NED vice chancellor, Dr Sarosh Hashmat Lodhi confirmed that the construction of the floodlights were in its final stages and the cricket ground was nearing completion. He said that the cricket stadium would be completed in two months, but the hockey turf would take more time because it was imported. He also stated that as soon as was appointed as VC, he would expand the sports facilities so that youngsters could have “could have opportunities to express themselves in a positive manner,”

Dr Sarosh Hashmat Lodhi also credited Sindh CM, Murad Ali Shah, a graduate of Ned University himself, for his support and financial aid. He also remarked that Murad Ali Shah was a great “ sports lover” and that he gave them his full support. Thus, NED University and Dr Sarosh Hashmat Lodhi did not have any problems to deal with, and so because of that, the sports project is in its final stages.

Now that the novel Coronavirus is in control in Pakistan at the moment, the vice chancellor hopes that all the sports facilities that they are developing will be used in the near future. He remarked that soon, NED would be a sports paradise and further added that NED wanted as many sports that were possible to be held at NED University so that many quality sportsmen and sportswomen could emerge from NED and use NED as a platform.