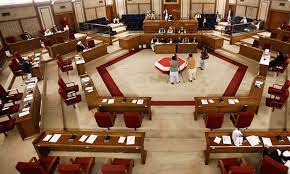 The cabinet meeting also appreciated the departments concerned for preparation of a balanced budget under the vision of the chief minister and congratulated the performances of P&D and Finance Department regarding the budget.

The chief minister said the preparation of the budget was made through consultation of all colleagues and a people-friendly budget is being passed in the Balochistan Assembly.

He said that financial discipline would be ensured in the next financial year as well, saying that the first priority is to increase revenue for betterment of the province.

Chaos erupted outside the Balochistan Assembly on Friday as scores of protestors and Opposition lawmakers and supporters holding a protest outside the assembly were baton charged by police.

The police said that the opposition had locked the doors of the assembly. The police was able to unlock them and let the lawmakers inside to proceed with the session.

The opposition said that their demands were not met whereas the government said that if the opposition’s demands are legitimate then they should follow the procedure and come to the assembly to discuss.

“Assembly is a prestigious institution and they have attacked it. The same assembly whose members these people themselves are,” he said, attacking Opposition MPAs.

He asked if anyone has heard the opposition’s proposals or demands.

The lawmakers were able to have the meeting despite the opposition’s efforts to stop it from taking place.