Work in top 500 companies at my doorsteps: CPEC employee 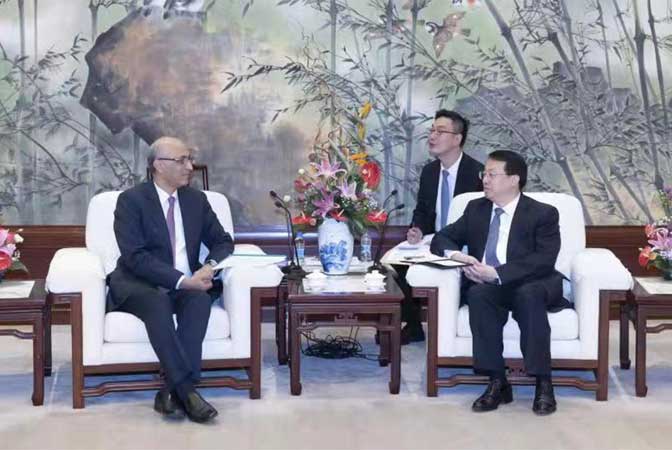 “Can you imagine that? Now we can work in one of the top 500 companies at our doorsteps! That’s something,” said Yousuf Karim, who has worked for China Road and Bridge Corporation (CRBC) for over 12 years, receiving plenty of praise for his speech in Chinese during a webinar titled “My Story with CPEC – Workers’ Perspective”.

The webinar, co-hosted by All China Federation of Trade Unions (ACFTU), China and National Development and Reform Commission (NDRC), China, was to highlight the role employees played under China-Pakistan Economic Corridor (CPEC).

Expressing his gratitude to thousands of CPEC workers from China and Pakistan, he mentioned that CPEC showed resilience even during a global pandemic. “Under CPEC, no project has been suspended for construction, and no worker has been laid off,” he added.

Chinese Ambassador to Pakistan Nong Rong noted that CPEC has achieved major progress despite challenges posed by the COVID-19 pandemic and CPEC has played a supporting role in combating the epidemic, stabilizing the economy and ensuring people’s livelihood in Pakistan.

“CPEC employees are practitioners, participants, witnesses and promoters of CPEC and also the backbone of CPEC,” he said, adding that next the Chinese embassy in Pakistan, together with relevant departments of China like NDRC, will work with Pakistan to help it realize industrialization and modernization, according to CEN.

Terming CPEC employees as pioneers, Ying Xiong, head of the External Affairs Coordination and Promotion Group of the Leading Group for the Promotion of the Belt and Road Initiative, mentioned that the corridor has brought US $25.4 billion in foreign direct investment to Pakistan and created 75,000 jobs for the locals, serving as a focal point for China and Pakistan to drive practical cooperation.

Chairman CPEC Authority Asim Saleem Bajwa reviewed the progress on SEZs under CPEC. Extending his thanks to both Chinese and Pakistani workers who have made efforts for the country, he noted that the GoP had organized different staff training programs to prepare them for future development and more related policies, laws, and construction plans are to be scheduled.