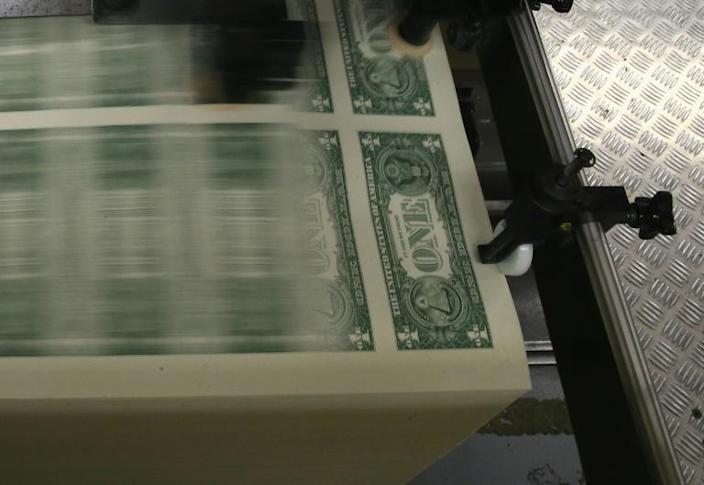 Asian markets were mixed Thursday while the dollar held strong gains after the Federal Reserve brought forward its forecasts for hiking interest rates as it looks to prevent overheating in the US economy, which is enjoying a blockbuster recovery.

After a much-anticipated meeting, top bank officials maintained their ultra-easy monetary policy and repeated their belief that the sharp spikes in inflation were expected as businesses reopen and people return to their daily lives. Officials have for months pledged not to budge from their highly accommodative measures and will stay the course until unemployment is tamed and prices are rising excessively for a long period of time. However, with the rebound looking well established, they have lately edged closer towards tapering policy, and Wednesday’s meeting highlighted that.

The closely watched “dot plot” of policymakers’ forecasts for interest rates showed 11 of the 18 committee members now expected at least two hikes in 2023. As recently as March, estimates showed only seven officials seeing a lift-off in 2023. Now there are seven who see next year as a target. After the meeting, Fed boss Jerome Powell said the projections “do not represent a committee decision or plan” but that the bank was ready to alter policy if it sees signs inflation moved “materially and persistently beyond levels consistent with our goal” of two percent. Inflation has surpassed that for the past three consecutive months and in May hit a 13-year high.

Powell also said the board had started talking about when to wind in its bond-buying scheme, which along with low rates and vast government stimulus has been crucial to driving a more than year-long rebound in equities from their April 2020 lows. He said the Fed would give plenty of notice before making any major changes, and will “do what we can to avoid a market reaction”. While many markets have hit record or multi-year highs in recent months, traders have been worried that the era of record low borrowing costs could be nearing an end soon. Michelle Girard of Natwest Markets told Bloomberg TV: “The move in the dot plot raised concerns that maybe even though the Fed now believes they are not going to be raising rates anytime soon, that the timetable might be tightened up, might be moved forward.

“We’ve gotten to a point that has everyone feeling slightly less comfortable in assuming that the Fed is going to be able to be as patient for as long as they would like.”

All three main Wall Street indexes ended in the red but off their earlier lows.

OANDA strategist Edward Moya said: “Powell’s press conference delivered a handful of dovish reminders: vaccinations have a ways to go, that the base case is still that inflation is driven by reopening momentum, and that they are ways away from substantial further progress.”

After an initial sell-off, Asian markets also pared or reversed losses. Asian markets were mostly down but also paring initial steep losses as traders see the tightening measures are being debated owing to the positive economic outlook. Tokyo, Sydney, Seoul, Singapore, Wellington, Manila, Mumbai and Jakarta were all in the red, though Hong Kong, Shanghai, Singapore, Taipei and Bangkok edged up. London, Paris and Frankfurt all fell soon after the opening bell.

The prospect of higher US rates sent the dollar surging against the yen, pound and euro, and maintained its strength in Asia, while rallying across the board against other units. It was up more than one percent against the South Korean won, Australian dollar, Mexican peso and South African rand, while the Indonesian rupiah, Thai baht and Canadian dollar were also under pressure. The greenback’s rise also weighed on dollar-priced oil, with both main contracts retreating from multi-year highs. Still, observers said they considered the black gold would enjoy further upside owing to an expected pick-up in demand as the world recovers from the pandemic.

Investors were also keeping tabs on metals markets after China on Wednesday said it would release state stockpiles — including copper, aluminium and zinc — to manufacturers as it looks to tone down prices, which have surged, with demand rocketing as economies rev back up. Officials in the world’s top metals consumer have grown increasingly worried about surging costs — copper hit a record high last month — while they have also warned against speculation, which has added to the rally. In a sign of the impact the issue is having, factory gate inflation surged nine percent in May, its highest rate since 2008.