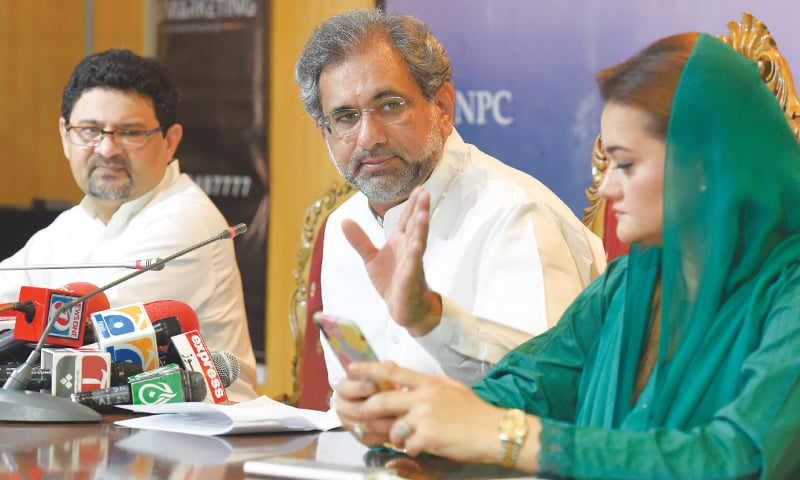 Former prime minister and PMLN Senior Vice President Shahid Khaqan Abbasi has said that the PTI-led government’s entire federal budget 2021-22 was based on the lie that this government will increase the tax revenue collection of the country by 24 percent.

“They have not been able to meet a single one of their revenue targets set for the past two years,” he said at a press conference, flanked by former federal finance minister Mifta Ismail. The former prime minister said this was the same government that said two years ago that the tax collection would be Rs 5555 billion but they couldn’t even reach Rs 4000 billion.

He said that this government set their target for 2019-20 was Rs 4963 billion but managed Rs 300 billion less at Rs 4693 billion. He said that the Imran Khan government came into power it imposed new taxes worth Rs 1,200 billion and had devalued the national currency by 35 percent. Even considering these two, he said the 12 percent inflation, and their combine financial effect, this government should have registered and automatic increase in revenue of at least Rs 2,100 billion without doing anything.

However, this government only managed around Rs 800 billion only, he said. “So the bigger question is that this claim of the government of collecting Rs 1,150 billion additional revenue, where will that come from? The entire budget of this year was based on this assumption as the finance minister kept on repeating in his speech. Also, this claim is extremely fictitious because it comes from a government that could not register even 20 percent revenue increase if all three years are added together,” he said.

He pointed out that the government had illegally altered the accounting system by incorporating selling of assets into revenues and made a part of the budget. It states that Rs 252 billion will be gotten from privatization and had shown it as government income, which is illegal and wrong as proceeds from selling assets cannot be termed as revenues, he said. These Rs 252 billion will be received by selling off two power plants made under the PMLN government so basically that money is Nawaz Sharif’s credit not this government’s, he said.

Out of this Rs 900 billion, the PTI government says it will get RS 570 billion of development budget back from the provinces because they won’t spend this amount and will surrender it back to the federal government. At one end, this government says this is a growth driving budget and at the other end it is demanding the provinces not to spend the development budget and surrender it back to the federal government. Where would the growth come from then? This exposes this lie that it is a growth driving budget.”

He said it is a sorry state of affairs that the federal government is banking on the hope that the provinces will be too incompetent to spend the development budget allocated to them and will surrender that money back and the federal government will benefit from it. The former prime minister busted the government’s claim that there were no new taxes proposed in this budget. He said that the documents shared so far clearly show that new taxes of at least Rs 383 billion were imposed in this budget.

The worst part about these taxes is that out of these Rs 265 billion are indirect taxes, which means that the burden will once again fall on the poor people of Pakistan. “This is the truth behind the claim of additional Rs 1,150 billion revenue that 252 billion will come from selling of assets, 570 from compromising development of provinces and 383 billion in new taxed. Therefore in real terms there is no increase in revenue collection. All this was nothing more than a circus of numbers”, he stressed.

This government needs to understand that it cannot fool the people with one lie after another. This budget was another linkin the same chain. The new taxes will be imposed on crude oil, 17 percent sales tax on LNG and RLNG. This is the same LNG and RLNG which this PTI used to demonize and is now reaping billions worth of advantage from them, even the report by the State Bank of Pakistan stated that the country benefitted massively from LNG, he said. He said he wouldn’t mind dealing with fake cases over the LNG as long as it benefits the nation.

Telephone usage both data and network usage has been tax which later some federal ministers said won’t be implement which had created a confusion that will the government revise its tax target after reducing means of collection?, he asked. Abbasi said “This government cannot achieve its tax revenue targets in real terms without increasing the prices of petrol and diesel by at least Rs 30 per litre.” This government has also imposed a 17 percent tax on industrial machinery.

How will that help increase growth when his government will cripple the industrial growth with taxation. Another lie he said is that exports have increased, whereas even after devaluation and inflation, the exports of last year were less than those of 2018 which was pMLN’s last year in government, he stated. The prime minister, the ministers, the advisors all lie on the floor of the house but these lies won’t help the country, he said.

Talking about the trade deficit, he said when the country was growing at around 6 percent under PMLN and CPEC was going great the trade deficit was Rs 35 billion. Today without any growth it’s is Rs 30 billion. Another lie was about bumper crops while at the same time admitting that Pakistan is a net importer of food despite being an agricultural state. Cotton production had reduced from 12 million bales in 2018 to 7 million bales in 2021, how is this a bumper crop, he asked. PMLN produced 25 million tones of wheat and exported too while this government claims 27 million tones and is still importing flour while the price has shot up 3 times.

The former PM said the inflation has shot from 3 percent to 16 percent while food inflation is at 15 percent as people of the country are struggling for 2 decent meals in Pakistan.  There was no strategy of decreasing tariffs and prices of electricity, gas, sugar and other basic items. Instead they have taxed sugar more which will increase the price of sugar upto Rs 10. This government has also taxed dry milk which will increase the price of everything made from milk including infant feed, he said. In 2018, 1kg of ghee had Rs 21 tax and in Imran’s new Pakistan it is Rs 51.

He said the only people who benefit from this budget are the construction mafia. The amnesty to construction mafia is being extended so that black money can be laundered. This had already raised the price of housing beyond an honest man because the black money mafia were at work and had put it beyond honest Pakistanis. This is an ATM budget that only benefits those who are Imran’s ATMs who rob the country and give benefits to Imran.

The capital gains tax has also been reduced on stock trading which also benefits Imran’s friends. This is the truth of Imran’s budget which doesn’t benefit any poor but the rich and corrupt friendly ATMs of Imran. Comparing the PMLN and PTI governments, he said, “In 2018 Pakistan’s GDP was $ 313 billion while today it is $ 296 billion after 3 years and 4 Finance Ministers which means $ 17 billion were reduced. Had PMN been in power it would have been $ 370 billion. PMLN’s 5 years deficit was Rs 7,500 billion while in 3 years of PTI it already is RS 10,000 billion.”

He said that the finance minister also complained that PMLN government increased debt and liabilities. The truth is total debt and liabilities under PMLN was RS 29,000 billion and under PTI is Rs 45,000 billion. The total interest on loans under PMLN was Rs 1500 billion, but under PTI it is double at Rs 3000 billion. Abbasi said in addition to all that this government had pushed over 20 million more people under the line of poverty and had rendered millions others unemployed.