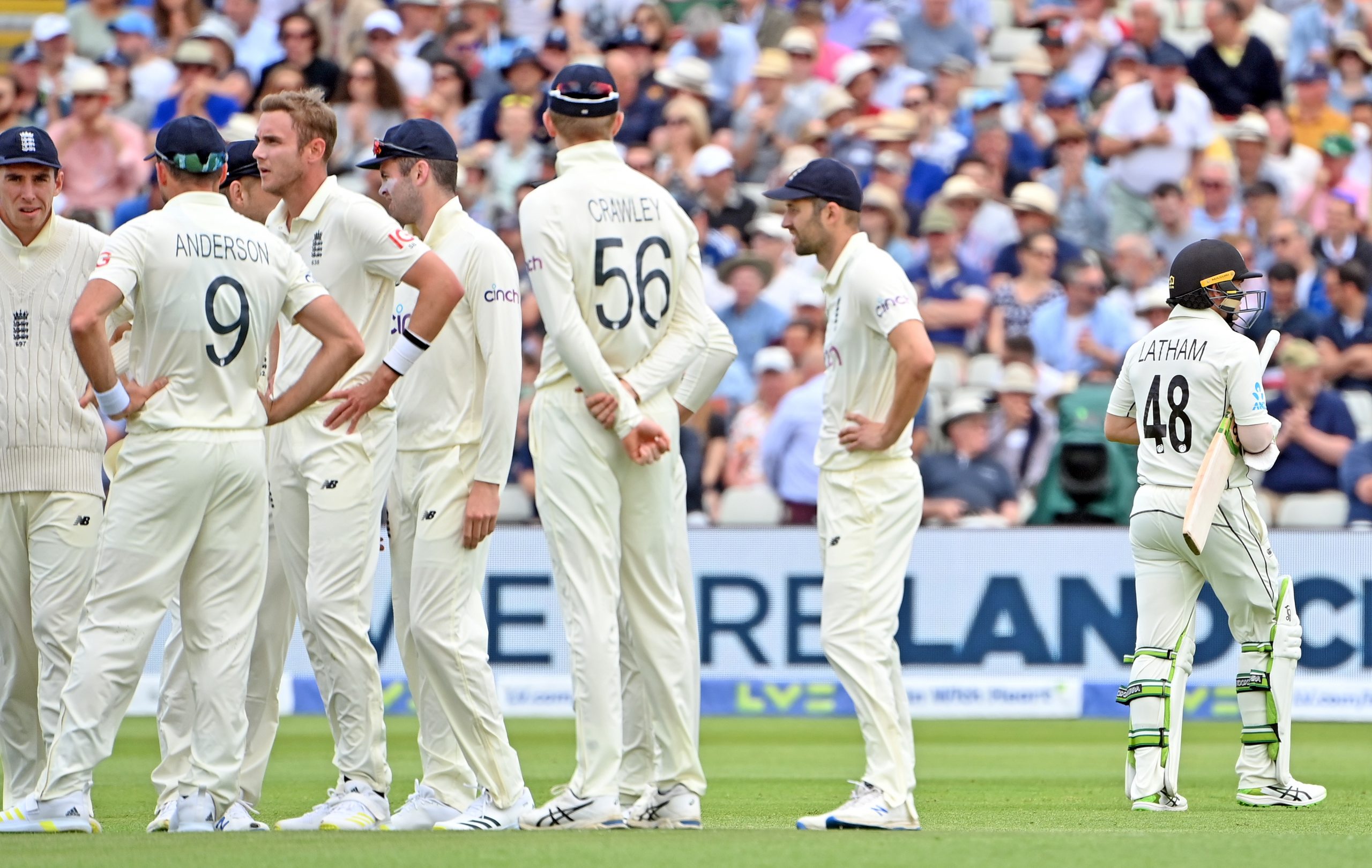 Stuart Broad removed stand-in New Zealand captain Tom Latham before the tourists kept England at bay in the second and final Test at Edgbaston on Friday.

New Zealand were 43-1 in reply to England’s first innings 303, a deficit of 260 runs, at lunch on the second day. Devon Conway, fresh from his stunning 200 on his Test debut in last week’s series opener at Lord’s, was 27 not out and Will Young — one of an exceptional six changes to the New Zealand side — unbeaten on six. James Anderson, rather than captain Joe Root, led the hosts onto the field in honour of his England record 162nd Test appearance. But it was longtime new-ball partner Broad who made the breakthrough when opening batsman Latham, leading New Zealand in place of the injured Kane Williamson, was plumb lbw for six to leave the Blackcaps 15-1.

Broad thought he had Conway, then on 22, out as well when the left-hander edged low towards Zak Crawley in the slips. But with on-field umpire Richard Kettleborough having made a soft signal of ‘not out’ as he requested a review, replay official Michael Gough felt there was insufficient evidence for him to overturn that call — to Broad’s disgust. Earlier, tailender Mark Wood’s entertaining 41 helped England pass 300 as Dan Lawrence, 67 not out overnight, finished unbeaten on 81. But the real impetus came from Wood, who started the day on 16 having already frustrated the tourists for 58 balls. The recalled Trent Boult led New Zealand’s attack with 4-85 from 29 overs.

England, who had been 175-6, resumed on their overnight 258-7 after opener Rory Burns had made 81 following his hundred at Lord’s. Wood cover-drove left-arm quick Boult for four in Friday’s opening over. It was the first of six boundaries Wood hit on Friday, including a pull off Mark Henry, with New Zealand departing from their successful policy of line and length swing bowling. But a stand of 66 ended when he played on to a pitched-up delivery from Henry, who marked his Test return in place of the rested Tim Southee with 3-78 in 26 overs. England’s 288-8 became 289-9 when Broad fell for a duck, caught behind off Boult to give wicketkeeper Tom Blundell, in for the injured BJ Watling, his fourth catch of the innings.

Broad’s exit brought in No 11 Anderson, who received his first standing ovation of the day from a crowd of some 18,000, with Edgbaston at two-thirds of its capacity after the easing of Covid-19 restrictions. Boult, who missed the first Test after taking family leave following the end of the Indian Premier League, ended the innings when he had Anderson lbw on review. It was an encouraging return for Boult ahead of New Zealand’s appearance in next week’s inaugural World Test Championship final against India at Southampton.